Conditions are not much improved in Minors

We have discussed this before. It seemed as though conditions would improve after MLB made changes this year, but apparently not as much as hoped.

A couple of highlights from the paywalled article:

Several players on the Brewers’ Triple-A roster in Nashville piled into a small one-bedroom apartment thinking they struck gold within their budget: instead they found a roach infestation. At the Mets’ Double-A affiliate in Binghamton, N.Y., last month, a group of players lost electricity and went nearly three days without power and running water. At the Cardinals’ High-A site in Peoria, Ill., it’s not uncommon to see players walking along the side of the road to the stadium about a mile away, or 40 minutes to the two best food options: Culver’s and Steak ’n Shake. Any walk for a minor-league player doubles as a treasure hunt, where discoveries have included discarded food, a projector and the holy grail: a mattress.

Even with the salary raises, players in multiple organizations said the extra $100-$200 per pay period isn’t enough to overcome the housing problem. Three current players told The Athletic they’ve taken out loans to pay their rent or to help bridge the early-season gap when they have to put down security deposits and first month’s rent in April, often before they get their first paychecks. The shortest leases are typically six months, meaning players pay for time they don’t need, and furnished apartments are a luxury few can afford. Guys who are on minor-league free-agent contracts — which takes six years — and those with big signing bonuses are exceptions. 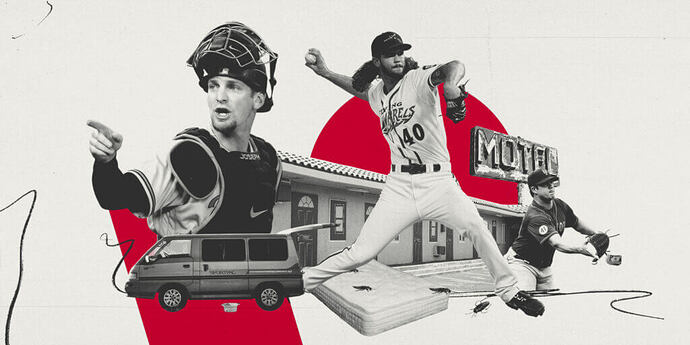 Cockroaches, car camping, poverty wages: Why are minor-leaguers living in...

From Stockton to Chattanooga, baseball's prospects face impossible choices while waiting for their shot at the big leagues.

As you know, all the big money in baseball is in the Bigs. Likely will always be that way.

It’s not much different at the college level. All the money is at the highest level.

When Dave Van Horn started out 30 years ago, here in Texarkana, he was living in a low budget house near the park where games were played. His salary had to be in the bottom 10% for college baseball coaches at that time. He would often hitch a ride to the park because he didn’t have gas money, and he was the one man grounds crew for the field. He and Karen were basically living off of her salary (she worked for either an accountant or architect, as best I recall)

I’m not sure if their house had roaches, but I know they had very little money in those days.

Once again, as in college baseball, the kids with wealthy parents have an advantage. And it’s not like the NFL – EVERYBODY goes through MiLB to get to the bigs, so there’s going to be some of this for everyone. I can’t imagine trying to perform well enough to get to the Show when you have to sleep in your car.

Just another very good reason to stay in college. The SEC is equal to AA with a whole lot better coaching and living conditions.

Just think about those who sign right out of high school. They are 18 and have nothing on that month-to-month deal in the minors. Still, if you are coming from the Dominican Republic, all of this probably is better than what they had. These tough minor league situations probably sound like a dream destination.

Glory it’s not. College isn’t a great thing for college baseball players. Student loans build up. I wonder how deep Kevin Kopps built his student loans in six years of college. I guess he had pretty good academic money, but I don’t really know.

I’ve had a couple of friends and a couple of my players play minor league baseball. It is a grueling grind for the one or two percent that are going to make it.
College baseball in my opinion is by far the way to go and why you’re seeing that 44% of the players in the major leagues right now come from college.

With NIL, I’think going to an upper tier school would be much better than being in the minors. I bet Razorback baseball players will do very well starting next spring.

Why not go college? You can get an education which will serve you well the rest of your life, and you can also see if you have the ability and desire to try to play MLB.
You should be able to get a good idea about your skills when you play college baseball and compete against your teammates and other schools.

In my lifetime, MLB owners got smart and went from class D,C,B,A,AA,AAA and the old PCL was a special class above AAA.

I bet they save a ton letting colleges provide training and I actually do not know what classes of minors there are now, but suspect Hot Springs and El Dorado no longer have minor leagues teams.

I bet they save a ton letting colleges provide training and I actually do not know what classes of minors there are now, but suspect Hot Springs and El Dorado no longer have minor leagues teams.

There’s rookie league, low-A, high-A, AA and AAA. The minors were reorganized this year to get rid of four leagues and 43 teams.

And no, the Hot Springs Bathers and El Dorado Oilers no longer exist. Both teams went away in 1955. Both played at the Class C level, which was eliminated in 1963.

Thanks, Swine, obviously I have not kept up with things.

I loved the old Texas league/Soutern Association post season playoff.
Travelers Field is a great memory and all of Fair Park.

The Pine Bluff Judges were a minor league team who played at Taylor Field in Pine Bluff from 1930-1955. They were affiliated with the St. Louis Browns/Baltimore Orioles organization and played in the Cotton States League.

The Travelers were a really outstanding baseball team in the 1960’s when they were associated with the Phillies and played AAA baseball.

I remember as a youngster when Travelers were a Phillies affiliate, Richie Allen came through the organization. Think he later became Dick Allen, (maybe a prophetic choice), as it seems he developed a reputation over time. He was a tremendous talent, that in my opinion, could have really had a better career.

The Travs were only in AAA for three years, one year in the International League and two years in the Pacific Coast League. Then they became a Cardinals affiliate and dropped down to AA, where they remain today. I suspect the travel expenses for road trips to places like Portland, Seattle and Honolulu were a factor. The closest PCL teams in 1964 were Oklahoma City, Dallas and Indianapolis. Everything else was out West. By the way, the '64 Travs won the PCL Eastern Division and lost the league title to the San Diego Padres, who were a Cincinnati affiliate. Tony Perez hit 34 homers for the Pads that year.

I’ve read some of what Richie/Dick Allen went through as a black athlete in Little Rock in 1963. Let’s just say it did not reflect well on the people of Arkansas.

Osceola had a Class D minor league team during the late 1930s. It is well-remembered in the history of the town.

I saw Allen at Ray Winder several times. Saw Al Downing pitch for Richmond there. Mom loved how Al turned his back to the batter rubbing the ball before every pitch. Great memories there.

Having grown up in Pine Bluff in the 50’s and 60’s I witnessed sad disgusting behavior towards African Americans first hand. Sad memories.

Racism, sadly, has been around for thousands of years and long before there was a USA. It would be hard, if not impossible to find many continents or countries throughout history where it wasn’t used. And racism and tyranny(with ritual and mass murders) would show its hideous face from most every group, nationality, gender, race and religion. The horrors and reality of it wasn’t only found in Arkansas nor limited to our fifty states. Subjugation(rape, forced labor, separation of families), of weaker tribes or communities has an overabundance of occurrences dotted across the globe like sea shells on a beach in Sanibel, FL.
Yes, these are all sad memories and sins of our forefathers. As sure as our blood bears witness to our kindred commonality, so are we all partakers of that heritage. I prefer to look forward and hope for the betterment for all of mankind because our world is surely shrinking and we will all be neighbors.