College hoops may not quite go back to normal

There were some things about this pandemic season that coaches actually liked. Scheduling flexibility, and scheduling to reduce travel. No suits on the sideline. Playing the Elite Eight on Monday-Tuesday. Zoom recruiting. And maybe no postgame handshake lines, and more centralized NCAA tournament scheduling, if not necessarily 68 teams in one city (what city could handle that if the fans could come?) 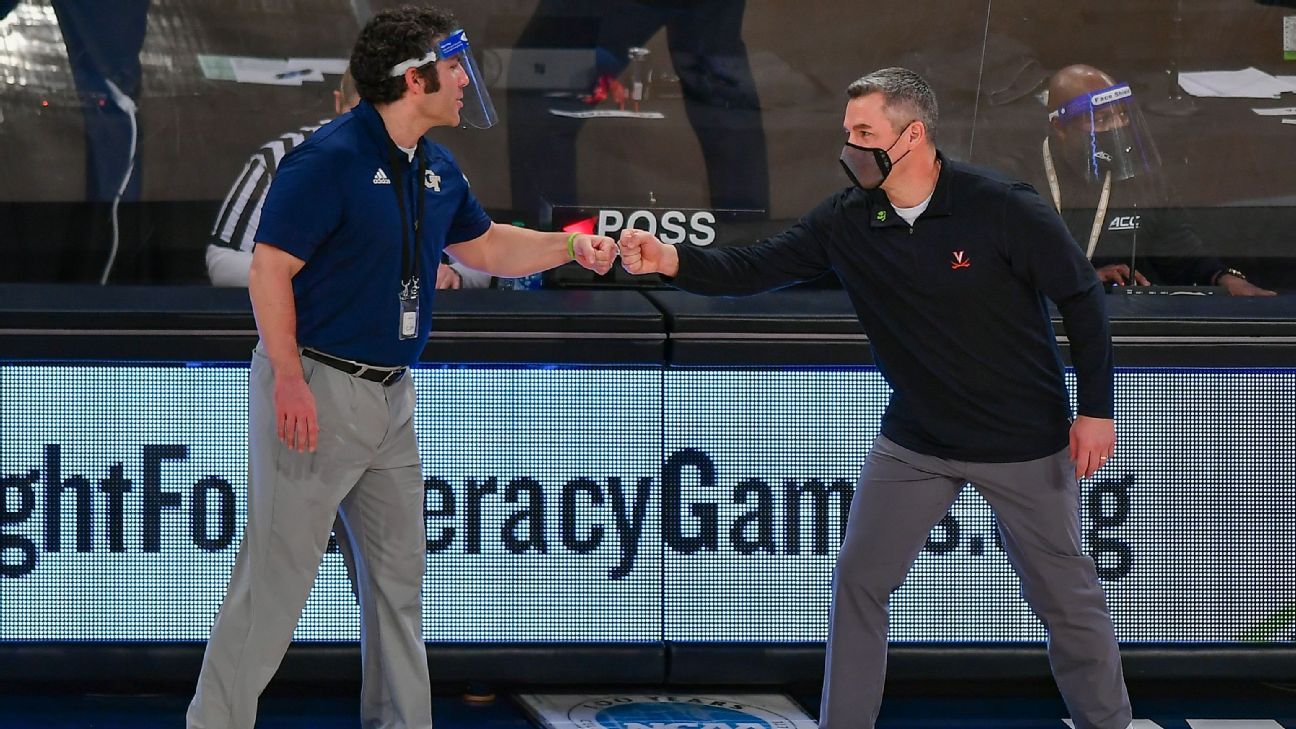 'We don't necessarily have to go back to the way things always were': College...

A one-site NCAA tournament? Games scheduled on the fly? The end of handshake lines? Some necessities of the season of COVID-19 could be adopted full time.

If college hoops can return to maxed out arenas with no restrictions on distancing anywhere in the building, and no masks… then most fans wouldn’t care too much about any other changes (well, except the idea of a central location for the entire tournament).

The central tournament location in a given geographic area as a permanent fixture is intriguing, both as an expense saver and a revenue generator, assuming the NCAA is willing to let some of the early round games be played in slightly smaller venues. Most of those early games don’t come close to selling out now, even with corporate sponsorship tickets considered.

I would love to see Big 12-SEC challenge in a city of two conferences on an alternate basis. That would be even more exciting event to go to than SEC tournament,

Could even play it every year somewhere like Kansas City or Dallas which would be in both leagues’ footprint.

Those would be two good choices. It would take out the home court advantage and tell us more about who is better. Could be huge money making opportunity for the two leagues and economies of the two cities.

I’m thinking we had a neutral site conference challenge at one point (Big East maybe?). Seems like we played Louisville at some neutral site one year.

Went back and looked. Played Seton Hall in the SEC/BE Challenge in Louisville in 2010. Then the next two years were Hogs @ UConn and Syracuse @ BWA. The SEC/BEC lasted six years, with the first four at “neutral” sites, but the Hogs only played the last three years. I put “neutral” in question marks because they did things like have Kentucky play in Louisville after us, and Tennessee and Vandy play in Nashville one year,

Is KC/Dallas closer to more big 12 campuses than SEC? I think so but could be wrong.

Probably, but there’s really nowhere else to put it that would be readily drivable to fans of both leagues, except maybe Houston or St. Louis.

A 600 mile circle around KC includes KU, KSU, OU, OSU, TCU and ISU from their league, UA, MU, UK, OM and Vandy from ours.

The same circle around Dallas includes the Texass schools, OU, OSU, KU, KSU, which is eight of their 10, and UA, A&M, Misery, LSU, OM and Moo U from the SEC

Of course if you just want to make it convenient to fly to, the answers are Dallas and Atlanta.

The 600 mile circle around Memphis includes OU, OSU, TCU, KU and Bayluh for them, and everybody but Florida in the SEC. Nawlins includes Florida but the two Columbias and Lexington are outside the circle for us. For the LD it would only include TCU, Bayluh and Texass.

I don’t know that anyone would really want to drive 600 miles to see that but it’s an interesting thought, and more fun than playing in Stillwater or Lubbock every other year.

Where is Dammit Little Rock?

As long as the management at Simmons Bank Arena wants nothing to do with sports, and I’ve been told that numerous times, that ain’t gonna happen. They’d probably prefer if the Hogs didn’t play there once a year.

Where is Dammit Little Rock

I think it more accurate to say that Simmons Arena got burned on heavy commitments to sports in the first ten years or so after it was opened. They had minor league football and hockey, and gave those teams lots of dates, only to see both teams fold. They had UALR basketball, and UALR rightly decided to build a nice little campus arena.

So the arena for many years has made almost all its money from something other than team sports. I have never heard of the arena refusing to book a basketball game or even a tournament(which requires a lot more than just an arena to pull off). They just don’t get a chance to book many games because there is no “home” team that plays there.

They don’t even bid on the state high school tournament, which should be in a lot better building than Hot Springs, even though I’m told the people there do a good job.

I understand the NCAA wants some arena upgrades before they would consider putting a subregional back in NLR, and nobody wants to foot the bill for those upgrades, so I don’t anticipate that. But it was kinda fun being around downtown that weekend in 2008 when all the fans were coming in from Texass and Memphis and Moo U and even Nike U and Miami.

Made Some money on those folks from Memphis (tickets)

I have called Little Rock a few things. At one time it was Home.