Can’t say I disagree with that sentiment from an anonymous Power 5 AD. College football, and college sports in general, may never be the same after COVID-19. I think in my mind I’ve expected/come to terms with changes, but not like they’re describing here.

Some options they suggest are a shortened 2020 season, perhaps with conference games only; a full season starting in October and finishing in February; or playing the full season in empty stadiums. If any of that is possible. What if, for example, the South is OK in September but the West Coast isn’t? And your team has a game scheduled with Fresno State? We know Louisiana is in bad shape. What if LSU can’t go?

Plenty to chew on and discuss here. A number of SEC ADs were quoted.

And we may not come out of this with all 19 sports UA currently sponsors. At that we’re probably better off than schools like Ohio State and Michigan, which lose a ton of money on “Olympic” sports. 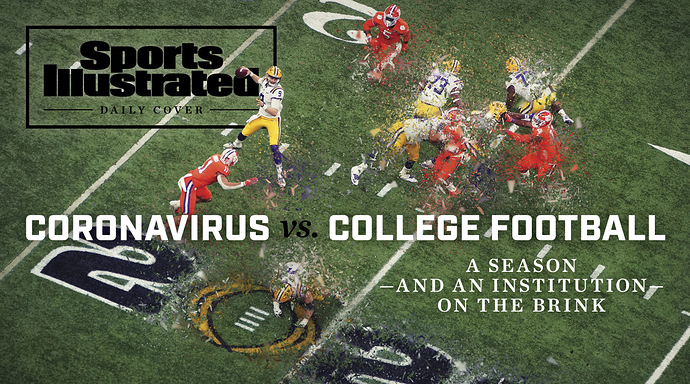 'We’re All Effed. There’s No Other Way to Look at This'

This will be very interesting for sure.I will extremely shocked if the Virus can thrive thru the summer based on the History of similar type Viruses and the # of cases of Countries that are in summer right now being WAY different than ours,no way they are doing that much better in social distancing.

The problem is there will be some who have it more than likely and they can spread it to others so its going to be interesting to see how we choose to deal with that.I can’t see us waiting to October or November to start b/c that will run you through the middle of Flu sesson and outbreaks are more possible…
I think we will start pretty much on time even if they have reduced attendance where they space everybody out and make you wear a Mask.I hope we get through this and never see it again,I hate we have lost so many lives to this and caused so much Economic Stress…Just my 2 cents worth… we will see.

I’m trying to imagine an SEC game with people sitting six feet apart. Actually, I don’t have to imagine it. I sat in the stands at the Homecoming game with Auburn in 1997 where there was PLENTY of room. I attended that game with a friend, a neurosurgeon (same guy who got me tickets to the 2018 CWS; he lives in Omaha now). Said friend was completely snockered, staggering around the rain-soaked RRS stands. There were so few people there that he didn’t bump into anyone in his drunken roaming. My wife at the time told someone sitting nearby, “He’s a brain surgeon. No, really, he is.”

The economic stress is horrible on everyone. I’m trying to find a job now. People who make hiring decisions are working from home and it slows everything down, even in the medical field where I do my thing. My son was just laid off in South Carolina; the hotel where he works shut down and had zero occupied rooms the last two nights before it closed. I don’t have a family to support any more, but having been unemployed a few times in the past when I did have a family, I know what that’s like; throw a pandemic on top of that. But at the same token, as a medical person I know social distancing, economically painful as it is, is the only way we avoid megadeaths from this thing. Korea got it right and flattened the curve. We haven’t, yet.

I may end up working temporarily at Ground Zero in a week or two: Mount Sinai Hospital in NYC. Talking about being thrown into the fire. I heard from a former colleague at my last job in North Carolina. My old unit has been converted to COVID-19 only, 34 beds full of people with pneumonia who are one step from the respirator.

My son was just laid off in South Carolina; the hotel where he works shut down and had zero occupied rooms the last two nights before it closed.

Pawleys Island, right outside Myrtle Beach. They’d already decided to shut down before their governor issued the stay at home order.

Pawleys Island, right outside Myrtle Beach. They’d already decided to shut down before their governor issued the stay at home order.

Man I hate to hear that. 1000 employees at The Sanctuary on Kiawah Island lost their job today. Tourism industry in Charleston (and I suspect MYB) is taking it on the chin

It’s sad to see and hear about people losing their jobs! It could be a long time before some of those tourism jobs open back up! Sports also takes a toll on jobs all over the country.
I keep hoping the scientist will find treatment to control this virus while they work on a vaccine.

I hate to hear that about The Sanctuary. What an awesome place!

Agreed. Spent my first anniversary there.

Doesn’t hurt I live 20 min away