College football and the virus

Clemson’s positive rate may be a very bad sign for football this fall.

I am starting to think maybe things should not move very fast toward a full season.

I’ve heard that all 26 who tested poisitive for COVID have no symptoms. If that is the case, quarantine them for two weeks and let them get back out there.

There will probably be more players who die from heat stroke this fall than from COVID.

So what do you suggest happen today if Clemson had a game to play in a few hours? Cancel the game or play with a short handed team?

There are anecdotal reports out there that may give reason to be hopeful. There were two barbers at SportClips in Missouri that were asymptomatic, contagious, and one cut 80+ heads of hair and the other cut 60+. Everyone wore masks, they got contact information on all customers, and I understand that, so far, none of the customers contracted Covid-19. That gang of people in the pool, also in Missouri, very early in the shutdown also has reported very few if any people now with the virus. Those asymptomatic players can still work out separately from the others and they can have managers in space suits sanitizing everything they touch and there may be no problem.

Everybody is going to have to play with what they’ve got, unless the numbers are just too massive to put a team on the field-then you are going to get a cancellation or a forfeit. On the other hand, teams are going to be like a lot of businesses now-asymptomatic or slightly ill people who test positive are out for a couple of weeks and then come back to work.

Freshmen being able to play four games without losing the redshirt is going to be a really good thing for keeping teams playing.

Will the quality of play be as good? Doubtful. Some college teams are going to be more like high school teams if they get several guys quarantined-really weak play at some positions because of guys who are not ready/aren’t good enough having to play. That may become more prevalent as the season progresses and injuries start to mount. But teams who only have a few guys out on any given week should be able to play.

Will quarantined players make for a wild season? Could be.

and I understand that, so far, none of the customers contracted Covid-19. That gang of people in the pool, also in Missouri, very early in the shutdown also has reported very few if any people now with the virus.

Remember a month or so ago, the WHO or CDC (don’t remember which), came out with a statement, that it now appears may be true. They said that it appears that there is only a small chance that asymptomatic patients are effectively contagious. Then, just a couple days later, there was a retraction released. These 2 cases you mentioned would make one at least say “hmmmmm, I wonder”.

A question on the 14 day quarantining. Have they ever proven that every asymptomatic patient that tested positive, will indeed test negative after 14 days? That always sounded strange to me. Why couldn’t an asymptomatic patient remain positive for months? Does his system fighting the virus just automatically kill it off over 14 days? How do they know he wouldn’t have tested positive a month before they tested him? These are serious questions, not stirring the pot questions.

One thing to remember about the situation in Missouri is that EVERYONE wore masks. To me, that just reinforces the efficacy of mask wearing.

I want sports to get going and this mask thing is probably one thing that stands in the way.

Why couldn’t an asymptomatic patient remain positive for months? Does his system fighting the virus just automatically kill it off over 14 days? How do they know he wouldn’t have tested positive a month before they tested him? These are serious questions, not stirring the pot questions.

Maybe one of the doctors on the board could answer this, but as I understand it, some of the tests for active cases measure if it’s still there. (I do not know how). Antibody tests, on the other hand, show positive even after a person would no longer test positive for having the disease. 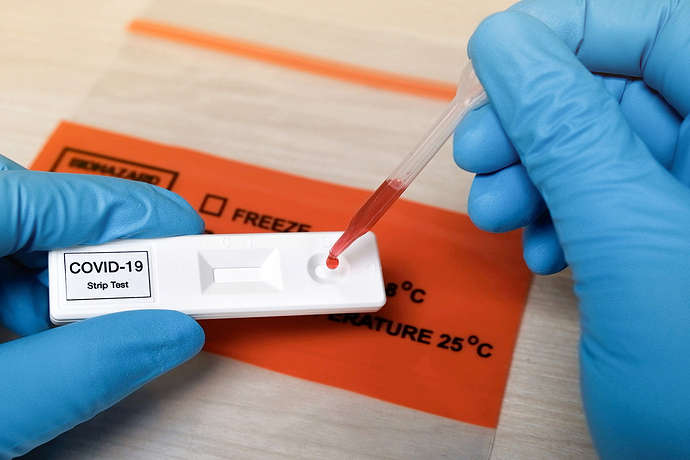 Antibody tests can't be used to diagnose the new coronavirus (COVID-19), but they can tell you if you've ever had it. This can help health officials understand and fight the virus. Learn more about these fast blood tests and how to get one.

Thanks. It is informative to an extent, at least as to how the tests are administered. However, it read very much like a CYA memo in the corporate world. Things like “if you test positive it could mean this, or this, or maybe it’s a false positive”. Oh, and you can also have false negatives. I think I’d prefer “I have no clue about the results, just be careful, wear your mask, and wash your hands”.

FWIW, today’s number of deaths from COVID was the least amount of deaths on a Saturday since March.

Unfortunately, the second highest daily death total in Arkansas, with 10.

Seems to me that the stat on # of new hospitalizations gIves you the best view of the current status of virus. It makes irrelevant the argument that number of cases are more because of increased testing. That number is trending up.

There will probably be more players who die from heat stroke this fall than from COVID.

What is their this need to compare death every time Covid makes a sports headline.

Daytona, we obviously differ, but I like hearing encouraging news.

There are going to be cases but 90% will be handled without hospitalization and if they do go 99% will survive and then they’ll be back out there. We don’t know what the future holds but we do know that there is an incredible survivor %, I don’t think this caught anybody off guard,in fact I was just listen to a talk show and the coach said he knew this was coming just a matter of when.

Daytona, we obviously differ, but I like hearing encouraging news.

Dude I’m going to cry myself to sleep every night if their is no fall college/pro sports… but I worry more about the average joe’s life.