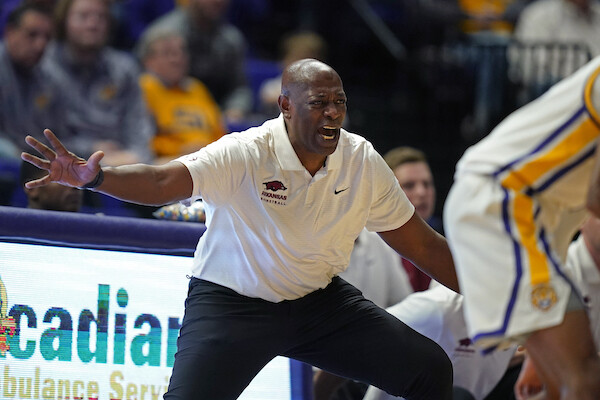 yeah he did a very good job!!

If I have this right, he’s undefeated as a college head coach.

How long before he gets a HC offer somewhere? One season with the Hogs and done? I bet plenty of smaller schools will show an interest.

If an AD is looking to replace their coach and watched this game and Coach Smart’s interview, Muss better have someone lined up.

If an AD is already looking to replace his coach on January 15, Smart isn’t going to want anything to do with that school.

Main thing is the players trusted & obviously respect Coach Smart. Muss does to.
Nuff said there.
Bigger better opportunities will come his way no doubt at some point. But he will focus on this team only for now.

I guess the dude knows a thing or two about winning close games huh.

Coach has been head coach for 3 NBA teams, you think small school is the best he can do?

I hope we can keep him for a couple of years till he replaces the scumbag in red stick. Very proud of the job he did today.

No, the sky’s the limit. But small school HC is better than big school assistant coach.

I didn’t know he was from Baton Rogue.

Better chance they extend him than fire him. They have had cause in their pockets for a while.

There’s still a slight chance that IARP actually does something. They did finally give Auburn a slap on the wrist. And to be honest, as slimy as Bruce Pearl is, SAO deserves to get the book thrown at him much more than Pearl did for an assistant who took bribes.

The complicating thing about the LSU/Wade situation is that IARP is also looking at the LSU football booster who stole money from a hospital foundation and used it to pay players. Two sports at the same time brings in lack of institutional control, which is the one thing the NCAA is fairly reliable about punishing.

Coach M is a recruiter. Players and staff.