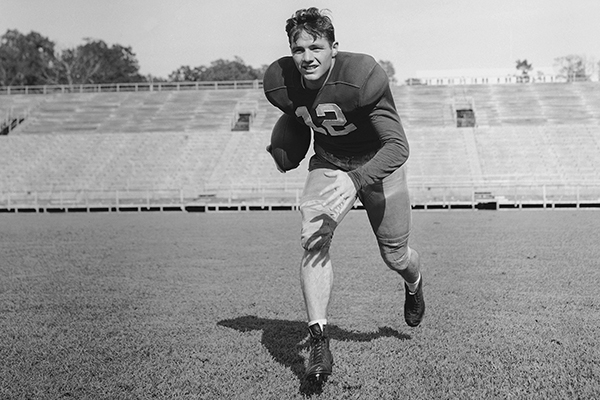 They told us Dad's brain arrived at Boston University in a matter of hours after he died.

That is a sobering article. My two oldest grandsons are big and athletic. Both play baseball and basketball and the younger boy plays flag football. Both boys are being recruited by coaches to play football. My daughter and son in law won’t let them play. Which I support 100%. I think both would play if they were allowed.

So I’m conflicted about loving to watch other kids play but not wanting my grandsons to play.

I believe Mr. Scott is correct about the lawyers getting more involved.

Clicking through the link in Steve Scott’s op-ed, I found at least four other Hogs with CTE: Danny Brabham who played fullback in the early 60s under JFB. as well as Glen Ray Hines, Lewis Carpenter and Ronnie Caveness. Keli McGregor, who was an assistant AD at UA for a while, also had CTE.

My two boys are not allowed to play. Not worth it. There are other sports.

This is the key:

“That report was hard to hear. Football helped bring my dad out of poverty, provided a wonderful education, gave him a financial boost out of college and helped kick-start a successful business career. He loved the game, his teammates, his experiences and his fans. I doubt he would have changed anything even if he had known what was coming, but he clearly paid a price. The last years of his life were difficult.”

Clyde Scott enjoyed a lot of notoriety in Arkansas due to football. It doubtless helped his very good career in the insurance business. Then, of course, the sheer joy of being a star in a team sport like football. I hate that he had a CTE issue. But, even if fully informed of risks, I’d bet Clyde would agree that he’d be nowhere close to what he became without Razorback and likely NFL football. I bet he’d still play. Life rarely gives us binary choices. This isn’t one of them either. Tough subject matter.

I am 69. I have a good friend who is the same age who not only played high school football (not with me but elsewhere in the state) but was also a very good boxer during those years. He now has early Alzheimers symptoms that are obviously worse each time I see him. I think back to my HS & JHS football career and can’t help but worry. I played left linebacker and in one game the split end blind sided me with a helmet to helmet block on a sweep to my side. It knocked me out, they used smelling salt to “revive” me, got me to the sideline, and my coach then called timeout so I wouldn’t miss the next play. I finished the game and didn’t remember much but I do remember knocking the crap out of that split end later when he caught a pass. I have had a Doctor friend tell me that was absolutley a concussion and I should have gone to the hospital, not back into the game. Now I worry every time I walk into a room and forget why I went in there.

If Clyde had only run the hurdles (and never played football), he would have still been a celebrity in Arkansas. And, he might have run them faster and better had he not played football. He was injured with probably something akin to high ankle sprains his entire football career that impacted his hurdle abilities. Hard to imagine what he would have run (both in the hurdles and the 100) with healthy ankles. Maybe multiple gold medals.

This is a tough issue as football fans (and a sports writer who has spent the bulk of his career covering college football). When I am close to the field and see the collisions, I am downright scared. It is unbelievable what you see happen close up.

I had a good friend from high school come to Arkansas as an all-state linebacker and quit after the first spring. He could not take the collisions in that first spring. He said the hits in college were so violent in the middle drills. The headaches and neck aches were just too much. He came off the practice field that last day of full contact in the spring of 1973. He was in tears. He knew it was going to be the last day he played football. Told me and then knew telling his dad was going to be really difficult.

It’s an awful consequence. It puts those of us who love the game in a conundrum. I don’t want it to change completely, but I’d love to figure a way to play the same game without all the head collisions. I’m just not sure fans would show up to watch flag football, though.

One practical thing that can & should be done, but won’t. Cut back on the number of games. Have a 10 game season. Shorten the game some. (Say make the quarters 12 mins long). That would at least significantly reduce the number of head collisions.

And the pros ought to eliminate exhibition games & cut back to something like a 12 game season. Greed won’t allow it.

If it makes you feel any better, I never played and still forget why I walk into a room sometimes

I believe the NFL is about to go to more games, not fewer. Now will they eliminate preseason games? I doubt it.

Harry Jones told me that he was no more than a tackling dummy when he played with the Eagles. He was a fast, straight line runner who could not make anyone miss. The collisions were awful. I interviewed him a few months before he died and he explained all of that in an interview that had stops and starts. After one of the stops he explained, “If I repeat myself, just stop me. I have dementia. I will repeat myself four or five times if you don’t stop me.”

I knew Harry really well. He sold ads for Hawgs Illustrated, as did Ronnie Caveness. I know more about their situations than I’m going to write. Both were beautiful people who paid the price for being good at football.

My family has been hit pretty hard with Dementia/Alzheimer’s. My grandmother had issues with memory at the end of her life that was heartbreaking. One of my best friends passed last June after years of fighting the Alzheimer’s battle. The last 6 months of his life was as sad as it gets. And we were caretakers for my mother in law in our home for 1 year when she was deep into Alzheimer’s. The pain and sadness is hard to describe.

This issue will not go away. Prayers for those facing CTE, Alzheimer’s and any dementia issues. Just sad.

That is so sad. I understand Jerry Eckwood (is he still alive) was living in some sort of assisted living or nursing home in Nashville the last I heard anything about him.

I suppose those who don’t suffer consequences until they’re quite old might reasonably choose to accept those consequences. But for the Jerry Eckwoods of the world who had no idea & who were affected so young, it’s just tragic.

And, heck, that doesn’t even take into account the occasional acute tragedy where players are rendered quadriplegic or permanently comatose.

I don’t think the players will push for less games but may fight the addition of more games. Less games equals less money and that would be eventually reflected in the players contracts. Greed exists on both sides of this equation.

I’m hopeful that with the focus on this that the football community will continue to enforce less helmet to helmet contact as well as the brutal blindside blocks that can be very dangerous. I also think that the helmets in use today are much much better than those in the decades before.

I don’t know, nor do I think anyone truly knows, what percentage of football players (college and pro) have CTE. It’s a horrible disease as is Alzheimer’s. I watched my Dad waste away with that disease and there isn’t anything I fear more than that. I can’t think of anything that is worse.

I’m no doctor, but I’m not sure the helmets can help much. As I understand it, the primary cause of the trauma isn’t the outside force of the hit as much as it is the movement of the brain inside the skull when the head stops so suddenly. If so, no amount of padding in the helmet can stop that. Just have to reduce the collisions & the force behind them. Easier to reduce the number of collisions than the force.

You’re right about greed existing on both sides, but the players are the ones bearing all the risks.

As I understand it, the primary cause of the trauma isn’t the outside force of the hit as much as it is the movement of the brain inside the skull when the head stops so suddenly.

That’s a pretty accurate description Chip. It’s like playing catch with a raw egg. You can pad the egg enough to keep the shell from breaking in your hands, but you can’t stop the yolk from sloshing around inside. There was some evidence that the new Vicis helmets, which have a flexible outer shell and an underlayer of plastic columns to provide cushioning. might be a little better at concussion prevention than some other models, but Vicis is in financial trouble and may not survive. I’ve seen more than one suggestion that if the NFL cares at all about player health the league should buy Vicis to make sure its helmets are available going forward.

I believe some of the Hog players wore Vicis this year. There were schools, Notre Dame being one, who had most of their players in Vicis the past two seasons.

If Vici goes under, I hope other mfgr’s use the technology even if it means buying a patent. Any help is better than nothing.

I’m not sure how well known this is, but Benjamin Franklin refused to patent the lightning rod he invented. He felt the danger he was preventing was itself enough reward that he shouldn’t profit by it. Imagine such an attitude today.

It’s my belief that football will be outlawed within 20 years. It’ll start at the high school level, probably in California, then spread quickly. Without the high school “feeder” system, college football will dry up.
Kinda glad I’ll be dead and gone.
My father played with Clyde Scott as one of Barnie’s Boys. He died at the age of 69 but never had a problem with dementia, thankfully.

So many of the issues I see are those who played in the NFL. Just think about the number of games they play beyond the college number. You have a much longer season, especially for the top teams. I know the starters don’t play big minutes in preseason, but they do play some. And, then you have 16 regular season, plus a few playoff games. Yikes.

Here is another strong take from another All-American’s son:

By Glen Hines, Jr., My father Glen Ray Hines was born October 26, 1943, in El Dorado, Arkansas. He graduated from El Dorado High School in 1961, and attended the University of Arkansas from 1961-1965. He and his family lived primarily in the Houston,...

Thanks for sharing this, Clay.

Glen Ray Hines was one of my early heroes and, I’m sure, a hero for many other young Razorback fans growing up in the 1960s. It is sad to realize that the game we love requires such a price from those who excel in it.

I truly believe that football as we know it will not exist twenty years from now.