Nice 16 minute clip. They look good for the summertime. This European tour should be interesting 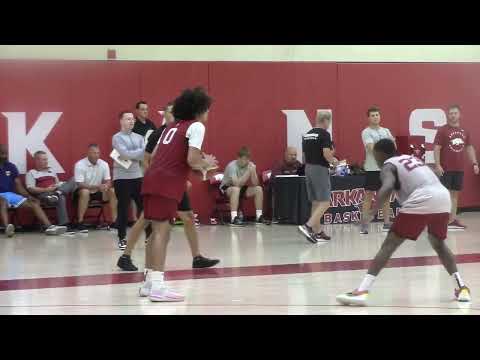 Wow this team has some size and athleticism,not too many open shots and are very unselfish,wouldn’t call that a great shooting practice but man do they hustle,they are going to Awesome in transition and much tougher on the boards,so many great athletes out there who play way above there yrs…can’t wait to see them play this yr!

that was fun, thanks for posting.

That’s a long, fast team, with lots of guys who appear to pass well and move well. and they were competing hard. “Iron sharpens iron”, was what I kept thinking. this will be a BATTLE for starting spots.

Devo is still Devo. so quick, so disruptive. I loved watching him cover Nick. nick couldn’t get around him, in this brief video. but that’s a great way for the frosh star to see what he’ll be facing in the SEC this year.

Brazile looks quick and long, as expected. Council seems like a stud, O and D. Makhel looks like a MAN. It is very very early, but i feel less worried about our interior than I have been. still would love to have Jaylin back, obviously, but this team looks long and deep.

and I LOVE Walsh, our “underrated 5 star”, if that’s possible. every single thing about his game, I love. He even wears my same haircut!

man oh man. I’m about to follow Jeremy and put some cash on us to win a natty, 18-1 seems like a fun bet.

C’mon in. The water’s fine, and I like our chances! Go Hogs!

What I found funny was the difference between the music played at practice from Coach Richardson to Muss. Coach played McFadden and Whitehead’s “Ain’t No Stopping Us Now” on an endless loop. Don’t know what Muss was playing, but it looked like fun, lol. 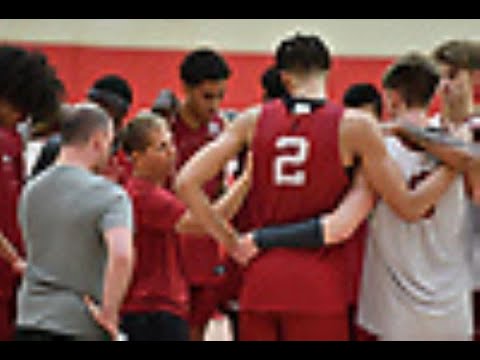 More talent than even our national champ. team?

More talent than even our national champ. team?

Don’t think so. Put a Corliss on this team and maybe. He was a 1st or 2nd team All American two consecutive years and was named HS player of the year by 2 polls (one he was tied with Jason Kidd). Corey Beck was a great floor general and a force on offense, defense, and as a team leader. I will say, Nick’s HS rankings and accomplishments certainly stand up well alongside Corliss’.

That 1994 team was on all the lists I saw of the top 25 all time National Championship teams. That was during the 10 or 15 years following our Championship.

This season’s team certainly has an opportunity to lay claim to the best and most talented Razorback Team of all time, but they have to prove it to me on the court this year. I hope they do just that!

I was overly impressed with most of what I saw, I was most impressed and excited about Muss’s presser. We are fixin to score at a high clip and at a much faster pace. We will truely be a joy to watch.

It’s way way way way early but obviously we are not there yet. There was some noticeable flaws as well, there are thing’s he demands and expects that a lot aren’t doing yet… but will or they won’t be in a rotation.
Mainly defensively.

It would be interesting to see another similar in length video of a made for media practice to compare in Januaryish.

Way pumped for the season to start.

hopefully we’ll see the pace and space offense in full force….what Muss promised us when he was hired…

we’ll outpace most teams we play, do we have enough perimeter shooters to effectively spread the opponent’s D and create driving lanes to the rim for our incredibly quick guards /forwards?…this is why I feel Joseph Pinion we’ll see a lot more minutes on the court than many folks believe

How good will this team be on defense? From the looks of it, very, very good to downright stifling….at least from my perspective watching all the practice clips.

I’ve said this before, but I don’t think the 1994 team was the most talented Razorback team. That distinction belongs to the MayDay/Big O Hogs in my mind. That group should have won at least one natty…but didn’t.

I was lucky enough to manage both squads. It just goes to show that the most talent doesn’t always win it all, but I’ve got $3800 reasons to hope Muss pulls it off with this group. I think this Razorback team has the most talent in the country…this year.

I haven’t watched Muss’ presser yet but he must be over the moon with the collection of talent he has on hand. This team’s potential is thru the roof.

I’ve said this before, but I don’t think the 1994 team was the most talented Razorback team. That distinction belongs to the MayDay/Big O Hogs in my mind.

Both teams were extremely talented. MayDay/Big O & Butch Morris were all NBA draft picks. The one one thing about the title team though, they were extremely blue collar & hard working. That’s the separation between the two for me.

As I recall, the 1994 team had a second five that were almost as good as the 5 starters such that they could substitute the whole 5 rested players on the bench for the 5 who were on the court. Flat out wore other teams out. I do not recall another Razorback team that had that depth and constant intensity. From the looks of things at this point, this team (if they “jell”) could end up being as good or better. I’d guess that they could end up being as good or better than anyone they play for the first half, but if all contribute the other teams will not be able to stay up with them at the end.

The separation was the 94 group was truly a “team,” whereas the MayDay/Big O group had fatal flaws that kept them from being the “team” they could have been. That’s all I will say about that, but I still believe the Hogs I watched play against UNLV in 1991 was the best collection of talent I ever personally saw in a Razorback uniform.

The separation was the 94 group was truly a “team,” whereas the MayDay/Big O group had fatal flaws that kept them from being the “team” they could have been. That’s all I will say about that, but I still believe the Hogs I watched play against UNLV in 1991 was the best collection of talent I ever personally saw in a Razorback uniform.

I still believe the Hogs I watched play against UNLV in 1991 was the best collection of talent I ever personally saw in a Razorback uniform.

The total talent on the floor in that game may have been the best ever to play in one college basketball game. UNLV was at least as talented as the Hogs. The difference, to me, was UNLV had their Corliss in Larry Johnson. An unstoppable offensive and defensive force inside.

I’ve always said the same thing. our most talented team ever was MayDay-Miller etc.

Triplets were great. Kleine-Robertson was great.

We might not have ever had Corliss if not for Larry Johnson. Corliss idolized Larry…he had his poster on his wall. Coach Richardson saw what he needed, and was very blessed that the best power forward in high school ball lived in Russellville. Honestly, we all are very lucky that Corliss was from Arkansas, and that Coach Richardson signed him. He was seriously considering Georgetown. That signing changed Arkansas Basketball forever.

There are men out there that can flat run and jump. I watched their feet a lot on defense and they flat out moved.