…when referring to the Hog teams of the 60’s. I don’t think any still picture better symbolizes that quickness than this picture from Texas Football Magazine. It’s a play from the January 1, 1969 Sugar Bowl against Georgia. Every single Hog has defeated his man at the line of scrimmage. 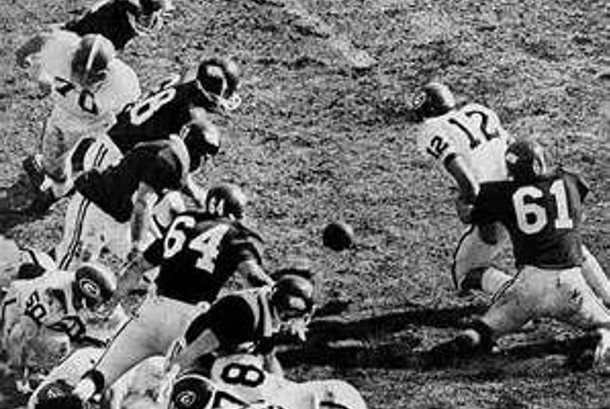 Georgia got 2 points that day. SEC champs had their offense shutout.

I was there for that one. One of the most solid games of any Razorback team and foretold what was coming in '69. That was the only team to figure out and stop the Texas Wishbone. It took some convicts to save texass.

It took some convicts to save texass.

And the best pass of James Street’s life.

16-2 and it was a blast to watch in person. Domination.
It was by the grace of God that I got back home from that trip. Wondrous memories forever etched in my brain.

Quickness with Catalon, Brooks and Foucha at safety are the quickest players in heart of the defense. Those three will be the blitzers that may help in pressures. Odom had them in cover packages most of the time but that may change going forward.

I remember Orville writing the game summary that “he knew it was going to be a good day for the Hogs when on the first play from scrimmage all Hog defensive linemen defeated their men and met at the ball” but I thought it was against Georgia in the Sugar Bowl. I think that game was after 69. How often did the Hogs do this back then?

Teddy Barnes made a great endzone catch in that game if I remember right. He was a fast rascal.

Teddy Barnes made a great endzone catch in that game if I remember right.

Teddy Barnes’ famous catch was against A&M in WMS in 1975, right before halftime to break a scoreless tie, then we dominated the second half, won the SWC title and beat Georgia in the Cotton Bowl.