Clay some questions for you after a loss to SJSU

Hey Clay, I am really curious to see how you address these questions. I respect your positions opinions and your experience.

First question, how would you rank this loss in program history? I don’t think I’ve been this low any other time. All others that are comparable had something you could factor. Toledo (they had a great up and coming coach , we were working in Enos passing game), NLU (we had John L interim Coach), CSU and North Texas (we had a first year head coach) but last night I can’t justify! Not one program in the country fears the Razorbacks! We have no intimidation factor or an ounce of respect from any other program… this is as low as it can get.

Second, have you ever see our OL and DL this weak, unmotivated and not prepared ? We have been dominated by OLs and DLs from the SEC for years, but it’s so bad that teams from far smaller schools just dominate us on both lines! Sometimes whip-n our OL with 3 man defensive fronts… or current DEs are simply put horrible, arm tackles and can NOT set an edge to save their lives… it’s part of the problem stated in question 1, a huge part. Teams simply run wide on us time and time again. It’s basic fundamentals… another thing some of our higher rated instate recruits have been on the DL… the 4 and 5 star types…NONE of them have lived up to the hype. Something is and has been bad wrong here!

Last question , and this comes from your state of the hogs column specific to the hiring of a great staff. Do you think Coach Morris has the network in college coaching to hire the staff it’s going to take to get this corrected? I myself have had concerns… I was willing as a fan to support the Ast Coaches he brought with him from SMU… but I’ve seen enough, these guys are not SEC ready, aside from Stepp and Traylor as recruiters… Our OC is not very good, OL is not very good, CB coach is not very good and no other SEC team would hire a single one.

I look forward to hearing your thoughts on these questions.

I don’t really spend a lot of time ranking losses. Sorry. How is this: this was bad.

I saw a lack of fire in the first half. That’s what I wrote. I have not changed my mind after sleeping. There were a lot of things not to like about this game, but doing the simple things well at quarterback would have won this game. Am I blaming the QB? No, it comes down to preparation and making sure the QB does what you want him to do.That’s on the coaches.

There were many more issues, but you don’t throw into coverage on the goal line.

I have Citadel and then all the rest are pretty much the same as far as worst losses. Citadel was not Division I. So it’s at the top.

Losing to SMU after they were just off the death penalty would be in there, too.

Citadel was the first game in the history of Hawgs Illustrated. Nothing else matches it in my mind just because of where I was in my career, starting a business that covered just one team and it lost a game that I couldn’t imagine. I’ve seen enough now to imagine losses – on any day.

Blowing leads in the last seven years makes me numb to that kind of things. Blowing the lead at Missouri and in the bowl game was really bad three years ago. The ULM loss with Tyler Wilson out with concussion was bad. Colorado State last year was bad. So is this. I’d put this one just under the Citadel loss. You decide where you want to rank them.

I don’t know what I’d do about staff hires. I don’t hire them. And, it’s early to say what they can do with the youth on the team. I believe he knows college coaches if that’s what he wants to do.

I saw teams run wide on the A&M freshmen defensive ends of three and four years ago. Too early on those freshmen DE to cast them off as not being able to play. Steve Caldwell says they are going to be good players. He’s seen enough good DEs to know.

North Texas (9-4), ULM (8-5) and Toledo (10-2) all had pretty good teams when they beat Arkansas. I don’t think San Jose State is going to have anywhere close to that type of season.

I think it is the second worst one behind the Citadel

Having been in the San Jose State press conference after the game, I don’t think they were that surprised because they saw what that could accomplish on film. 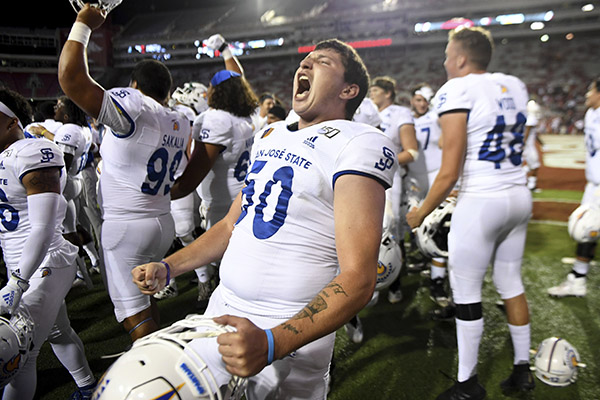 'What a night': Spartans record biggest win in years

San Jose State had a lengthy list of accomplishments in its 31-24 victory at Arkansas on Saturday.

I think we all agree it’s up there on the list as one of the worst.

I also think at the end of this year we will look back and see this as one of the worse teams.

No one wants it to be that way, but it will be.

A&M ,Auburn, BAMA, LSU and Miss St are going to kill us in the SEC west… I mean run wild on us and throw for record setting days…

This loss could be a career ending loss for Morris as far as being P5 head coach. I don’t remember any highly successful P5 coaches that have overcome such a loss. I’m not saying to fire him, but just making an observation. I hope he proves me wrong.

After a 2-10 season that was extremely painful, that makes the SJS loss even worse. Then add in they’re one of the worst teams in DI. It’s hard not to doubt what’s going on right now. If they tank the rest of the season, recruiting will be a huge challenge.

Yesterday was as low as low could go.

So other than financial considerations, what would be the rational for keeping him if recruits are bailing?

And if recruiting implodes can HY let $9mm get in the way of going another direction if he’s decided CCM isn’t the guy?