Clay on why Arkansas-Oklahoma never played a football series 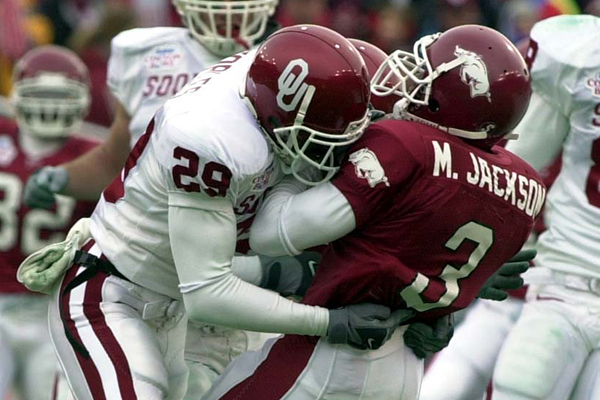 State of the Hogs: Arkansas-Oklahoma football series never made sense

The campuses are separated by only around 230 miles, and Arkansas and Oklahoma fans interact daily along a shared border. So why haven’t they played more?

Fun to talk to three of my favorite coaches: Barry Switzer, Ken Hatfield and Harold Horton for this column.

Given Switzer’s propensity for NCAA troubles, its interesting that Broyles reportedly offered him the UA job but did not offer it to Jimmy Johnson, who supposedly had committed similar transgressions.

Jimmy did not get the offer in 1976 when he was an Arkansas assistant. He was passed over for Lou Holtz (after the Switzer offer). I also am sure that Frank knew that Barry was not going to accept the offer.

The time that Jimmy thought he was going to get it was when Frank hired Ken Hatfield.

Who knows how close it was between Ken Hatfield and Jimmy Johnson? The thing that was obvious was that Jimmy was not winning at Oklahoma State. Would he have done any better at Arkansas than he did at OSU? Winning at Miami with the talent that was flowing in south Florida was an entirely different deal.

Here is the plain truth, Mike Gundy has won more at OSU than Jimmy Johnson did. I covered those Jimmy Johnson teams. They had some talent, but didn’t win a lot of games when Jimmy was coach.

Is it true that when Jimmy was at Dallas, the NFL had no salary cap?

Couple things I’ve always wondered, where would we have been had we not Hired Jack Crow?? Or if Hatfield has left the year before for Georgia??

On the SEC, we were NOT ready with Faculties, funding, boosters , recruiting, coaching , really anything in Football.

I don’t know , I just think we have limits… we give up money and play a weak schedule, or go through what we have for the last two years…,

We have two more division titles in football than Ole Miss, South Carolina or Moo U and three more than TAM or Vandy or Kentucky. And our record against LSU and Auburn is actually pretty good. Nobody’s record is good against Bama except Dabo Swinney.

It’s cyclical. Bama was down, we were up, won three titles. We’re down, Bama and LSU are up now. Neither one is permanent. Saban won’t be there forever and we can take advantage when he’s gone, if we got this hire right.

Surprising OU does not schedule UofA or an SEC team as they are doing with BIG10 NE. OU would like to leave the Big 12 either for SEC or BIG10 & will likely do so when the Big 12 contract expires in 2025.

Arkansas has made great strides over past 15 yrs that improves our opportunities to attract talent: the student body has almost doubled in size, upgraded UofA athletic facilities & campus, strong academics, finally an AD who is proactive, capable, & not asleep at the wheel, improved access to NWA via highways & XNA airport, & the rapid growth of the less remote NWA area. Does not hurt that we play SEC where players get NFL exposure & relatively close to talent rich DFW & No TX where we have a large alumni following.

With a good coach & leadership under Coach Pittman & HY, & with some level of proven success, & if our fans will fill the stadiums again (after covid), we can perhaps be competitive in SEC & nationally.

I just finished watching the Virtual Razorback Road Show. Watching those coaches made me think about Switzer’s opinion that the Hogs do not belong in the SEC. There is a lot more to an athletic department than football. (I grant that it is the primary sport and money maker.) But look at how our teams have competed on other SEC sports. The track teams, baseball, basketball (we’re getting there) and other sports are among the elite in an elite conference.

I personally think we compete much better in the Big 12, at least in football. And football is the tide that lifts all boats. We have competed In football at times well in the SEC. But I’m not sure we are willing to be crooked enough in the SEC in football. I am convinced you have to cheat on a high level, especially if you are an Ole Miss or an Arkansas, to win nowadays in the SEC. Either that, or have a savant coach like Petrino. Even Petrino didn’t cheat quite enough to win the conference. Whatever. My fervent hope is that Sam Pittman proves me wrong. Meanwhile, I’m Much more concerned about whether we have football in the fall at all.

Nutt and Petrino proved we can compete in the SEC.

I’m not sure there’ll be as much cheating if the new rule works as I understand it. It will just be a matter of who can line up the best sponsors.

Good discussion. I covered Big 8 for 14 years. There are some schools that we don’t seem like. K-State, Kansas and Iowa State do not seem like Arkansas.

Oklahoma and Oklahoma State do.

And Missouri did not seem like any of the above. It seemed more like a different breed. Maybe because of pro dominance. Remember there were once two NFL teams nearby Columbia.

The state of Arkansas is like 2 states. Draw a line from Texarkana through Little Rock and exit in northeast Arkansas. Below that line is SEC territory. Above that line is Big 12 territory. I am from Southeast Arkansas. I now live in Fayetteville. We have nothing in common with Oklahoma, Missouri and most of the Big 12 states. if you are south of the line. But, we do have Louisiana, Mississippi, Alabama and Tennessee in common south of the line. It is a geography and the people near us and where we travel and how we live.

So, what occurs is we are split on where we think we should play sports, the SEC or the Big 12. We are split by where people grew up and live. I always thought that southern Arkansas could have gone with Louisiana to make a state. Northern Arkansas could have been part of Missouri. Remember that show “How states were shaped”? Arkansas is a very diversified state, both geographically, politically and many other ways. It is great, but this diversification can also cause problems.

When I think about this stuff, I think about Clemson. It was not that long ago that the football programs of the two had very similar results. Then they got the right coach and boom. Can it be done at Arkansas. I don’t know, but I do know that this poor little Arkansas stuff will not get it done.

Is Sam the right guy? Who knows. There is so much more to this than just Xs & Os. He is certainly putting emphasis where it should be.

I’m with Jim. Always have believed it can be done. Too many examples in all sports.

Switzer didn’t mince words:
“Arkansas doesn’t have enough talent at home to play in the SEC and they needed more than just Texas players.”

I don’t believe this is entirely true. If we have an exceptional coach BCS bowls, top 5 finishes, 11-2 seasons are possible. But exceptional coaches are rare by definition and one isn’t likely to come to Arkansas again. You can win at other SEC schools with good coaches, but anything less than an exceptional coach at Arkansas is probably producing average to below average results… which takes us back to the Joe Kines quote:
“You’d better get ready. In the SEC, if you’re not, they’ll slit your throat and drink your blood."

Just one man’s opinion. I guess I could be talking about you or Switzer. I think you can win in the SEC at Arkansas. So many examples of good coaches winning in the SEC at Arkansas in other sports. His point is that in the SEC, Arkansas has not won an overall SEC football title (but 3 SEC West titles), it has one SEC basketball tournament title and zero SEC baseball tournament titles. In baseball, there have been SEC overall and SEC West baseball titles. There has been a Final Four in women’s basketball, but high finishes in the standings are rare. There are lots of examples of other sports doing well, but those are the facts on the major sports.