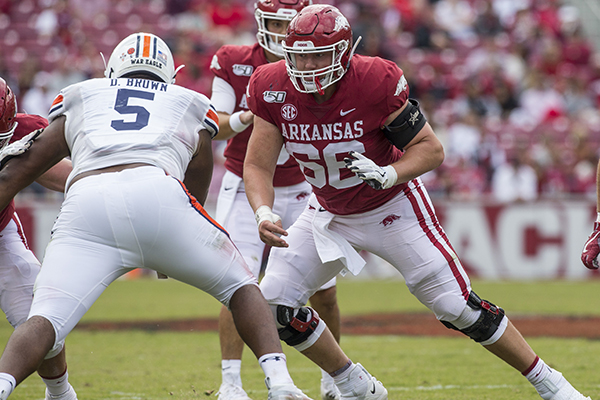 State of the Hogs: Auburn dominated at the line of scrimmage

Auburn dominated at the line of scrimmage to throttle Arkansas, 51-10.

Yes been like that for a few years, I think I heard the announcer say the average point difference of this game was 36?point over the last 4 years. Nothing new here, we just got our butts handed to us by auburn, another year, another a## kicking.

And yet, Baylor is atop the Big 12 standings…after a near death penalty situation.

And they’ve not exactly been playing the top teams in their conference either.

Whatever we got, we can’t get over it, the beatdown goes on and on.

The Big 12 and SEC aren’t the same.
Look at that league from top to bottom and there’s a huge difference.

We do not have across the board mid SEC talent. Potentially much less.

Many felt we were better than last year and maybe it happens.

We have needed constant better recruiting since joining SEC, which has been major issue.

Arkansas will likely not be good until that’s fixed.

Patience is given when there is confidence in program direction.

I would offer that is where fan base is evaluating.

Show game management and beating San Jose state or progress against the best as there is hope.

Or we are in this awkward place because of game coaching not just perineal lack of talent issues that have plagued most of last 25 years.

I get being upset about SJS. No excuse. Definitely one of the worse losses in school history.

I get being upset about Ole Miss, Texas A&M and Kentucky. Winnable games.

It was so obvious Arkansas was overmatched on both lines early in this game. It will be that way against Bama and LSU too.

The lines will take a bit to be able to hold up against the top tier SEC teams.

The key is how do they do vs. WKU, MSU and Mizzou. They need to win two of three. Three of three would be huge.

Winless and it’s even uglier.

I think we are very well capable of winning all three but the problem is we are very well capable of losing all three. We have no identity because we can’t point to a area where we can control a segment of a game. I’m watching Kansas hang with Texas and I wonder how Les can come in and make such a difference in the first year with so little talent. WPS

Capable if they get some good QB play! The defense is wore out from being on the field all game long by the end of the 3rd quarter.
The lack of depth kills the defense and the only way out is recruiting. We are still chasing speed!
At this point I just hope they beat WKY and win 1 SEC game!

Will agree. If they win four or five that’s what a lot expected.

I agree that the first step is recruiting, but after getting the recruits you have to be able to coach them up if they are going to be difference makers. We thought we played well against a good A&M team and now Jimbo’s team doesn’t look to be all that good. Mizzou last night looked like we did against SJS by looking past Vandy to the next game and got handed a loss that should never have happened to either of us.Give credit to Vandys coach as he had them ready and he made a Qb change before coming in to that game that changed the dynamic’s of Vandys team and confidence. Derek Mason ought to win coach of the week in the Sec hands down I my opinion. How well Morris recruits this year will no doubt determine his longevity as our coach and how well we play down the stretch will determine how well he recruits. He needs a Sec win to be able to sell his brand to recruits and I’m hoping we can pull off a upset somehow but I do not feel confident at this time that we will. WPS

To win any remaining game, what do you hang your hat on? What is it that we can do successfully game in and game out to secure a win?

Does anyone really believe they will win 2 or 3 of those games?
This team hasn’t shown any improvement, I feel like that’s believing with false hope. I just hope they can beat WKU.

I would not be surprised at victories later in the season. What happens with other programs – both upward attitude and downward – is the key to November. If you can get effort late in the year, there are times that other teams fail to match the effort and intensity. And, one win, might lead to another.

Missouri did not have effort at Vanderbilt. Like it or not, there will be teams that treat Arkansas like playing Vanderbilt. You won’t think it will require maximum effort and it might not in some cases like Alabama, LSU and Auburn. But there is a difference between those three and others left on the schedule.

For some on this forum, I get where you are. And, you don’t want to consider there can be an Arkansas victory. You are in a “show me” state of mind. Fair enough.

I’ve seen football for 40-45 years and know things change and a spark can ignite things. You just have to keep coaching effort and build.

Offensive line play will improve. It takes time there more than anywhere else. I’m not saying it will get magically good, but the more guys play together, the more they learn what and how to play in the SEC.

Clay, I think you need to go talk to the team and let them know that they can turn this around. I think it is getting to the point they need someone outside their circle to inject belief and confidence.

Time of possession was pretty even so our defense wasn’t out there any longer than Auburn’s unfortunately.

Fair points Clay - will be interesting to see if they get that effort. They flat out quit to end 2018.

Will it be different this year with no bowl possibilities, etc.

Clay, great points. Petrino’s first team was massacred in three straight - Florida, Texas, and Alabama (in some order) - by about 150-0. Not exactly, but close.By November, they were competing, battling on every play.

That is what fans want, and what the program needs. It is the step necessary for any coach to turn the UA ship around. Might as well be Morris - he is here and he can build momentum more quickly than anyone. If not Morris, we have to look to 2020 for that opportunity.

I am not looking for 10 wins, NYD bowls, and 2:30pm TV games every week. I want movement towards those moments (which are at least 2-3 years away, regardless of coach).

Morris has become that kernel of corn that gets stuck between your teeth. You obsess about it, letting it consume your attention. You are bothered by something that seems so simple to fix. You swear it is insurmountable. You are convinced it is a huge issue. Then, you get around to looking in the mirror and find that it is tiny, and easily addressed. I’d like for this to be easily addressed, that Morris has a “come to Jesus” moment (or someone has it with him) that allows him to fix the glitch. Progress is not just measured in wins. It can be measured in other things as well, and the players are the first to witness it. Maybe they witness it already and the more public aspects of it are not easy to see.

At least Baylor is beating the lower level teams in their conference.

We’re losing to the bad teams in our conference. That’s the difference. I would take that in a heartbeat.