Clay ? For you on history of Arkansas football

Clay I have been watching this documentary on the History of the SEC… while Arkansas as in the University of Arkansas did not become a member until the 90s… Arkansas the state plays a huge role especially in regards to the University of Alabama (Bryant , Hutson), Kentucky, and LSU (McLendon)…

I’m not sure if we should take pride in these Arkansas Boys or if we should be like “dang they left us behind!”…

Do you know if any of these guys even considered the HOGS?

And has any other state produced the high level of coaches that our state has? We have had Arkansans as head coaches at , LSU, Ole Miss, Kentucky, Alabama, Auburn (twice), Texas(Twice) , Louisville and Oklahoma… and I might be missing one or two… that’s impressive!

I don’t know the back stories on any of those you mentioned. I do know that Hutson was a great player at Pine Bluff and would have been recruited by everyone. There was a time when a lot of good players from Blytheville went to Alabama. How that started I’m not sure, but it’s a long way from Blytheville to Fayetteville. I will ask Louis Campbell about how Bear got to Alabama and whether or not Arkansas was considered. Louis started his coaching career at Alabama under Bryant. He has some interesting Bear stories.

In his memoir, “Bear,” Bryant recalls Crimson Tide rosters were filled with many Arkansans “because of the influence of Jimmy Harland, who ran a poolroom in Pine Bluff where the school kids hung out. He had adopted Alabama. A self-appointed scout. After Huey Long came to power in Louisiana, Harland did some recruiting for LSU, too, but when Long got shot he went back to pushing Alabama full-time. Our 1935 Rose Bowl team was loaded with Harland recruits—Don Hutson, Charlie Marr, Bill Young, Happy Campbell, Leroy Goldberg, Joe Dildy, Dutch King, me.” 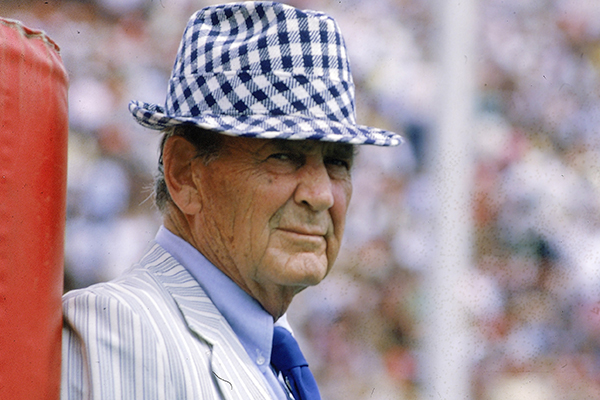 Years before interviewing for the UA head coaching job, the legendary Alabama coach went to an Arkansas university.

In the early 1930s Alabama had an assistant coach named J.B. Whitworth who was from Blytheville. Those Blytheville teams in the 1930s and 1940s were loaded with talented players, and over the course of about 15 years there were about a dozen players from Blytheville who played at Alabama, including four brothers, the Mosleys.

I grew up in Pine Bluff and my dad told me many stories about the Southeast Arkansas or Pine Bluff connection to Alabama. In fact, as a little boy in the late 40’s I got my first and several haircuts at that pool hall which doubled as a barber shop by that time. There’s a book called “The Greatest Coach” about Coach Bryant that details alot about that connection and the Fordyce stories. Well worth reading…

As a Pine Bluff boy myself I’m wondering if that Pool Hall was the Stag on Main Street? That place looked like it was out of the 30’s and 40’s. Or so I’m told…

Can’t remember what it was called, but it was on North Main near the Courthouse…

That’s the one. North Main near the Jefferson County Courthouse. Me and my buddy slipped out and visited there a few times late at night. My dad never found out. Thankfully.

There were a lot of places that I recall in that part of the state that looked like they were from the 30s or 40s. Probably all gone now.