Clay column on the OU/Texas situation

The latest from Clay: 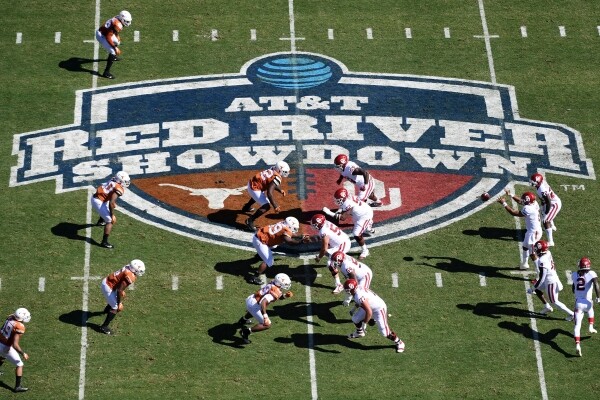 What took Texas and Oklahoma so long?

Among the most famous Frank Broyles quotes seems incredibly relevant as Texas and Oklahoma pour on the steam toward SEC membership.

I always respect Clay’s analysis. He’s got his father’s gift for getting to the heart of the matter when it comes to these things. So, it’s comforting to read his take that this will help our recruiting in Tex & OK & be overall better for us. I agree the schedule can’t be any worse with a permanent OU or UT on it than a permanent AL, LSU, or AU.

From a geography standpoint, we might improve, too. Until A&M & MZ joined the conference we were really isolated. The far NW corner of the footprint. Even with them we weren’t geographically close to anyone except MU. Now we’ll add one school to our west and another to the SW. Arkansas won’t be a “border state” in the SEC. Every state adjacent to us will have an SEC presence. That should help us recruitingwise as well. I always thought Alabama benefitted from being in the geographical center of the conference. Now it’s less so. (Of course, it recruits nationally now.)

Yeah, I like that it moves the conference’s center of gravity more towards us.

Well OM is about 400 miles from Fedvul, CoMo is 300. So it’s not that much farther to the land of Rebnecks. But nobody else in the current SEC is close. (Norman is 243 miles).

I listen to Clay Henry, just like I listened to Orville back in the day.

My problems with this has less to do with recruiting/added competition and more to do with all the drama and trouble Texas brings to the business side of things. Clay reminds us that Coach Broyles wanted this a long time ago. I remember Coach Broyles saying several times back in the early 1990s live and in person that Texas and A&M were coming with us. He wanted that to happen. Coach Broyles was a shrewd businessman.

So, maybe I’m too easy to persuade, but I feel a lot better about it after reading Clay’s column and comments.

I’ve not thought about the recruiting angle, nor seen it mentioned elsewhere. But it does make a lot of sense in terms of helping us against our old SWC foes. It many ways it could be a situation not unlike the old SWC when recruits knew they would be playing a lot of games back home even by going to Arkansas. I sure hope that’s how it plays out.

I’m starting to think this really hurts A&M in terms of recruiting. Their brand is going to really be diluted. And a recruit looking at Arkansas/Baylor/Tech can go play in the SEC against Texas and A&M or go play in the ???, some new version of the WAC I guess.

Thanks for the well-reasoned column and the nostalgia, Clay.

I’ve not thought about the recruiting angle, nor seen it mentioned elsewhere.

I literally brought this up earlier. It’s a HUGE win for UA. It’s going to cripple OSU, TCU, Baylor, Tech

The best kept secret in years Football Insider Board

In football we do not beat OU or UT for recruits in Texas. That is not where we make our living. We made our living by out evaluating everyone else down there and taking the kids UT and OU didn’t want, coaching them up, beating aTm on the reg and competing with UT. Over the past decade our football program has shown nothing but incompetence. As such, Texas Tech, Baylor, TCU, Oklahoma State and possibly K State have more cache in the Lone Star state. Maybe even Houston and SMU. UT and OU l…

I think it does hurt A&M, and they know it, and that’s why they flipped out last week. It creates an opportunity for us but we’re going to have to take advantage of that opportunity. It’s not a given that it will help, but it could.

“But money is the issue and Texas grows the pot. Those SEC checks are the magic elixir.”

I fully understand the basis of this. I think, anyway. The larger question is whether just having more money or “checks” really means more SEC wins? Or does it just mean we can pay a bunch more people employed in the athletic department and build more facilities that often don’t fill for games we don’t win?

Everyone in this league and others has money and will have lots more money over next several years. I’m still unsure how getting more money, alone, will help Arkansas in a league, now with UT and OU in it. Maybe. I see the optimism about improved recruiting, etc. But I’m not 100% sold. We shall see.

Well, I should have paid closer attention to you, then. I don’t know if I read that or not, but if I did, I clearly did not comprehend it.

I think there’s a lot of merit to that proposition. And if Clay Henry says it, then I’m a believer.

My problems with this has less to do with recruiting/added competition and more to do with all the drama and trouble Texas brings to the business side of things. Clay reminds us that Coach Broyles wanted this a long time ago. I remember Coach Broyles saying several times back in the early 1990s live and in person that Texas and A&M were coming with us. He wanted that to happen. Coach Broyles was a shrewd businessman.

Recollect reading on the Texas side of this discussion in the early '90s that SEC invite to Arkansas was in efforts to entice ut & aTm to follow. SEC saw $ in the DFW, Houston, SA, & Austin tv markets. At that time, ut did not like the idea of being an equal in the SEC plus did not want to open up Texas to SEC recruiting.

Despite the $, not convinced this will be a good move for Arkansas. ut deep pockets, NIL opportunities, & ut strength in Texas recruiting works in their favor. After Saban retires, I could easily see ut being the ongoing SEC elite team, assuming they have a good coach. Not sure if or how Arkansas benefits, unless we are able to play competitively against ut & OU & therefore improve our recruiting in Texas & OK.

aTm is probably the team that is most disappointed & perhaps the big loser of ut/OU coming to the SEC. aTm enjoyed ut being in their rearview mirror & did not expect that freedom to be so short-lived. Fans on ut boards are now enjoying the taunt of aTm.

It does not matter whether or not Texas has a good coach if you have a good coach. When Arkansas was well coached, Texas was not a problem even when the Longhorns had good coaching. A well-coached Arkansas team will compete in the SEC. I know it deep in my bones.

I’m not saying Arkansas wins every time, but it won’t be a problem to play Texas, Oklahoma or anyone else.

And with another $30 million (or whatever it becomes), then you will be in position to hire good coaches, or keep Sam Pittman well stocked with good assistants.

I completely agree with this, Clay. The right coach can win at Arkansas, even against UT and OU. The art form the AD must employ is using the money in a way that maximizes football coaching talent. That’s what I’m saying. Lots of money won’t matter unless it’s strategically used the right way.

Arkansas is currently competitive or better in every sport but football because we have great coaches. I think CSP has the potential to be great too, maybe not Saban great but on par with the rest of the coaches in the SEC. Football can be in the hunt too.

completely agree with this, Clay. The right coach can win at Arkansas, even against UT and OU. The art form the AD must employ is using the money in a way that maximizes football coaching talent. That’s what I’m saying. Lots of money won’t matter unless it’s strategically used the right way.

My point was about ut winning due to their deepest of pockets & not so much about them having a good coach. With all things being equal, hope we compete with ut $, especially in NIL, in the recruiting battles? Also helps ut that they have a legacy & automatic draw for recruits & coaches, same a AL, ND, etc plus their location in talent rich Texas that attracts the local talent.

Not downgrading CSP as I believe he is the right coach for Arkansas & would prefer him & his asst coaches over most other coaches, including Sarc at ut. Hopefully having the right coach is enough. However, are we in a college environment where the deepest pockets buy players & championships? Does ut moving to the SEC make them better & does that better enable them to win those championships, same SEC may be doing for aTm?

OU success against ut, especially with their much shallower pockets & smaller recruiting base, makes me hopeful that Arkansas too can have similar success & build their own legacy.

OU success against ut, especially with their much shallower pockets & smaller recruiting base, makes me hopeful that Arkansas too can have similar success & build their own legacy.

OU has neither shallower pockets nor a smaller recruiting base in football. Those people are committed to winning football; if money is needed, they get it for football. And it is now recruiting nationally, including on defense. There are no limits to its recruiting base right now.

Once OU gets in the SEC it automatically becomes the second most storied program in the league. Arkansas is a long way from that. Hell, I just want Arkansas to have an 8 win season.

Hell, I just want Arkansas to have an 8 win season.

It’s only been five seasons since we had one. Damn, it seems like a lot longer than that.

Great article Clay, glad to see we are of the same mind regarding the addition of OU/UT. Your thoughts on recruiting very much mimic my own. I’m optimistic regarding the future of the program