At the start of their preseason game with Green Bay, the Chiefs offense huddled in the old-style “choir” huddle that Len Dawson used in Kansas City. I remember using the same huddle in junior high football in the early 70s. Patrick Mahomes and Travis Kelce were in the huddle although they were not going to play. Chiefs took an intentional delay of game penalty, which the Packers declined, and the stadium announcement was delay of game on #16 – Dawson’s KC number. 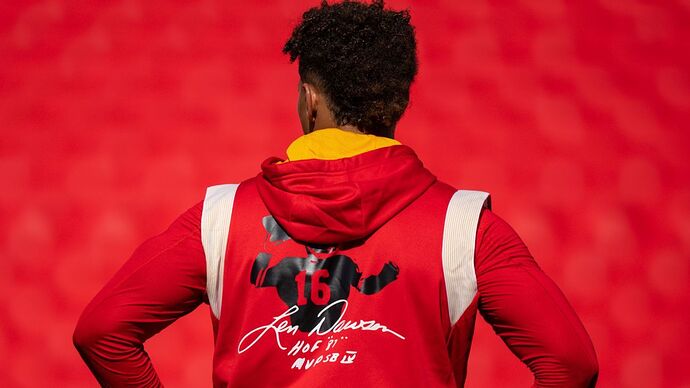 Chiefs players honored late Hall of Fame QB Len Dawson on Thursday with a special huddle in a game against the Packers.

I’ve been a KC fan since I knew football existed. I was born in KC, my family is from KC and I have family still living there. I’ve got an uncle that retired from the Chief’s org.

I love to see stuff like this. I love to see the respect for our elders and those that paved the way for the success of the present.

In a time of angst and conflict, people can still come together.

Similar story Gentry… I grew up just south of KC and my earliest treasured Christmas memory was when I was around 5 and got a full set of pads, Chiefs helmet, and Chiefs jersey with #16 on it. My parents always implored me to eat my vegetables to grow up strong like Len Dawson.

I have friends who grew up close to where he lived and Len would actually come outside and toss the football with them quite regularly. He was quite a gentleman, was blessed to meet and talk with him a few times in the last 10 years or so.

He put value on that franchise that is unreal. The Hunt family always told him to tell it like it was, good or bad, on the radio broadcasts as well because the fans trusted Len more than anyone at all times.

They could also have honored Len by smoking cigarettes on the sidelines during the game!

I have been a KC Chiefs fan for nearly as long as they have been in KC. I don’t watch preseason games as a rule. I saw the beginning of this game, but turned to something else before the first Chiefs’ possession. I had to go back and watch this. What a great moment for a great player and man.

I was at the game last night. That opening penalty deal was cool & well received by the fans.