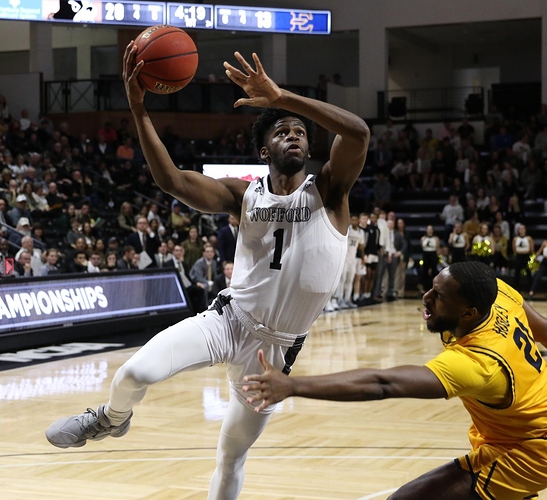 Q and A: Chevez Goodwin on transfer from Wofford

Talk about well spoken. This young man has his $h!t together.
He has a bright future after basketball.

The check came in DD

That is the third grad transfer that committed to USC. They may even add more since NBA draft leaves them with very little experience.

That is the third grad transfer that committed to USC. They may even add more since NBA draft leaves them with very little experience.

All this time I thought Dudley was referring to South Carolina. Goodwin is from Blythewood, SC so I just assumed Frank Martin got a good one.

Only the school in Southern California.

I’m the same as Dudley but I know reporters in S.C. that do use USC for South Carolina.

People in South Carolina also use “Carolina” to refer to the Gamecocks. That irks my UNC grad wife and a lot of UNC fans who refer to UNC and only UNC as “Carolina”. I remember going to an Arkansas football game at South Carolina and a Gamecocks fan wore a shirt calling their team “The Real Carolina”. Thank goodness my wife was not at the game. But she would have appreciated the fact that the person in the tunnel who directed people to their section looked at my ticket and had no idea where that section was (it would have reinforced her feeling of superiority). I found it myself when I located a section filled with people wearing Razorback red. By the way, Wofford beat the UNC version of “Carolina” in basketball this year. Ouch!