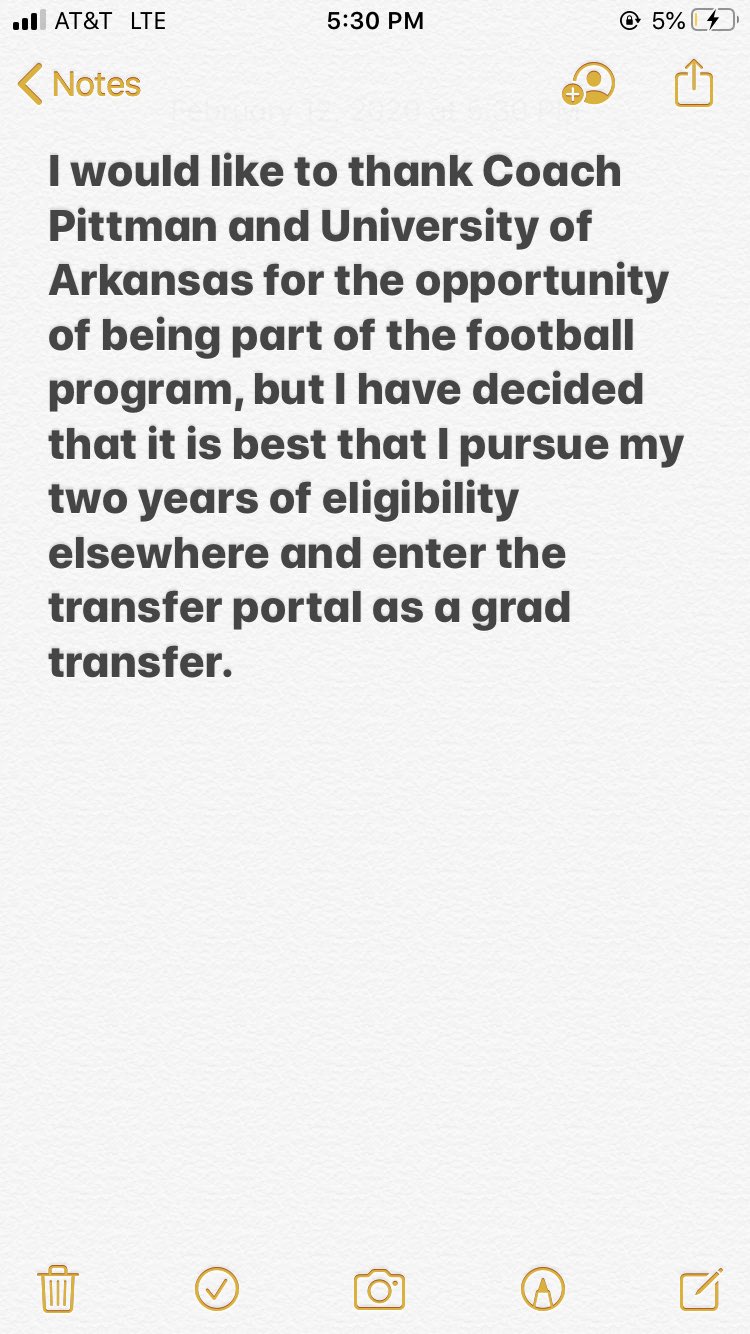 How well has he recovered from his injuries?

He’s good to go. From what I’ve gathered, schools are already reaching out.

We need a good portal goalie. I thought Chase’s plan was to make that decision after Spring practice. I am very concerned about depth at RB.

I think we have a lot of talent in the running back room. Boyd, Spivey,Smith and I really like the freshmen we’re bringing in I think he’s going to be a very hard-nosed kid.

Chase started out with a bang in his first game as a true frosh. He had 120 yards rushing against Florida A&M. That ended up being the best game of his career.

All the best to Chase!

Yes someone to block or at least slow down the number of players entering that portal. I realize that portal works both ways, but we’ve lost a talented young D-linemen, an experienced TE and in Jones, TQ and Hayden, a lot of speed.

Everybody is losing players. Bama lost a 5 star DE to Colorado before he ever played a snap. That’s just how things work now. Your signing class is not going to be intact four years down the road.

While I appreciate his time as a Razorback and wish him well, it seems he was in a good position to get significant playing time going forward. We certainly are not crowded at running back.

Hate it but he can see that he is likely the fourth back.

Chase is the type kid you want to recruit. Very, very focused on football and academics. Having a father that played in the SEC and NFL is a huge advantage.

Aaron demands mental and physical toughness. I’ve told him I would want to raise a son just like he did with Chase and the way he is with Dallan.

I can’t say enough about the family.

Best of luck to Chase. I loved his film coming out of high school. I know it was only high lights but thought it was one of the few times that almost every run he made resulted in a touchdown. I’m very sorry that it didn’t work out at this level and on the Hill but hope he can find similar success wherever he goes as long as it is not against us.

Do you think he is behind Spivey?

There is no way to know whether he would have been behind Spivey because it is a new staff.

Chase has been planning on doing this since week 4 of last season per people around him.

His initial plan was to go through spring practice, graduate and then announce he would be a two-year grad transfer.

One thought that he might change his mind with the new staff, but apparently the pull of being “nearer” home is too big of a draw. I’m told there is apparently also the love of a young lady involved as well.

I’m told there is apparently also the love of a young lady involved as well.

And that is probably the bottom line. Nothing affects a young man’s head, heart & whatever like the love of a young lady. I remember a whole lot of homesick (read that “lovesick”) freshmen who left behind a “hometown honey.” Heck, I was one of them.

Chase was at best a slot receiver, never a running back. Never hit the line hard up inside and always tried to bounce it out. Was too fragile to last a season if he was “THE” back, so I truly wish him the best and hope he can stay healthy.

Wish him the best, but if he’s still enrolled could he suit up for the basketball team.
If I remember correctly wasn’t he named Mr. Basketball in Tennessee?
He could surely give someone a breather for a couple of minutes each half.
I don’t believe he would count against scholarship numbers.
Jamario Bell has given some minutes, why not Chase before he leaves? Might be the most fun he would have as his memories of being at Arkansas as a student athlete.