Change the result of one play to create chaos

For Andy Staples, the choice is easy. Take away the Henry Heave at Ole Miss. Flopnecks win the West, Alabama doesn’t make the playoffs (and go on to win the natty), maybe a few coaches remain employed. 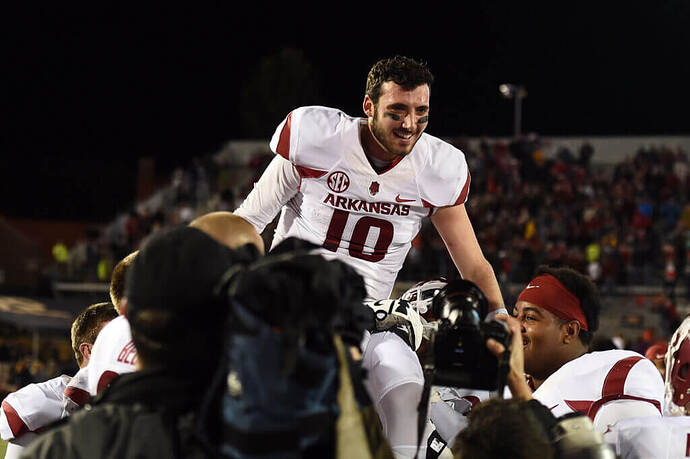 Dear Andy: Rewriting history, how Notre Dame bet on itself, and the SEC's...

Chasing down some hypothetical historical questions, plus how SEC and Notre Dame are partners in CFP expansion talks for different reasons.

Andy also addresses the weird alliance between the SEC and Notre Dame, who both want a playoff setup with lots of at-large teams,

That was one of the greatest plays in Razorback football history. It was certainly one of my favorites. The fact it crushed Ole Miss was the thing that made it so great. I have never seen anything wilder than that in Razorback football. Thank you, Hunter…you are the man.

Yes, that play in 98 in Knoxville was important. So was the fake punt by Florida in title game against Hogs. So was the Orlando Watters punt return in Knoxville in 92. Majors might not have been fired and Phil Fulmer might have been hired at Arkansas in 93. Fulmer believes that.

I was in the stands for both of those plays. Ugh. At least they tore down the Georgia Dome in ATL so I don’t have to see it again. But last week I had to walk past Neyland headed to see Paul McCartney. I get a headache just seeing it. Yikes….

#1 The Stumble Fumble in Tennessee.

#2 The Fake Florida Punt in the SEC Title game.

#4 The Sugar Bowl Cheaters
I think I’d like to see how it would have impacted the program if in the I believe it was Sugar Bowl vs ‘the’ Ohio State with their pack of cheaters that got to play. IF the hogs had scooped and scored instead of just jumping on the ball down on OSU end of the field.

Still mad that they let the cheaters play and said they would punish them the following season when most of them moved on to the NFL and didn’t play the next year. Total screw job on that one.

Now I’m assuming this is just football, if we include baseball then without a doubt the dropped foul in Omaha… I’m positive everyone know which one I mean.

I think this thread is kinda drifting away from the idea of creating chaos. If we beat Tennessee in 98, maybe we beat Moo U, win the SECCG (which would have been a rematch with Tennessee) and beat Florida State in the NCG, but does that create chaos elsewhere? And that’s still three more steps that would have had to happen apart from Clint’s stumble. Whereas the effect of the Henry Heave was clear from the get-go. We knew that night that if OM won, they won the West.

I could see Watters’ return in ‘92. Maybe that saves Majors’ job and Fulmer doesn’t stab, uh get hired to replace him. Which led to Peyton Manning and '98 and “you can’t spell Citrus without U-T”.

If Fish doesn’t touch that punt, Florida doesn’t win the NC, but we don’t either. It wouldn’t have gotten Urban Blight fired or anything.

And yeah, Street to Peschel. He drops that ball, Nixon gives us the trophy, Joe Paterno is still mad in Happy Valley, but it doesn’t create chaos.

The Sugar Bowl was just a bowl game. Didn’t affect anyone but the two schools involved.

That too. Change that play, or Street to Peschel, or Bill Montgomery throwing it away in field goal range instead of the pick in the end zone, and we win the game.

It sure would be nice to change a play and win the Big Shootout.

Although it was a few years before my time as a fan, that game seems to have had such a significant impact on creating the mystique Hog fans often feel that it’s all going to slip away. The feeling that disaster might be just over the horizon.

I wonder: Did Hog fans feel that way during games BEFORE the Big Shootout happened? We had a lot of success in the 60s but were still somewhat new to big success overall.

That game just seemed to wound our psyche as Hog fans in a way that we’ve never quite recovered from. Even though many of our fans were not around then, it still seems to linger.

Of course, we’ve had similar experiences in some other games, but none on such a big stage as that one.

This thread is a statement on why sports are so great. One play defines a person, time , place etc forever. It can happen at any time and in the most unexpected way–Clint;s fumble for instance. It can change expectations rightly or wrongly on just one play or one day.

Lot’s memories in those remarks and difference is so small but impact so lasting. We keep supporting ,hoping and wishing for that one play to go our way and it has (Scotty’s shot against Duke in 1994 Basketball championship game for instance) but we still want more.

He’s asking if we always had that sense of impending doom. I think the answer is no. We beat them four times in the 60s and in two of the losses scared the pants off them when they were ranked #1. And at that time, pretty much all we cared about was beating Texas and going to the Cotton Bowl, in that order. You didn’t worry much about the rankings because we knew we weren’t going to get votes from Big Ten country or the west coast. Remember how many weeks in history we’ve been #1 in football? One, after we beat Texass in 1965. Then the Big Ten writers turned out in force the next week to boost Michigan State to the top, even though we won 55-20 in our only game as the #1 team.

In retrospect, maybe we should have had a sense of doom; we had the '65 NC on a silver platter in Dallas thanks to Sparty’s loss in the Rose Bowl, and couldn’t finish the job against LSU due to Jon Brittenum’s shoulder.injury. Maybe that was a harbinger of disappointments to come,

What if Atwater would have made the INT in the end zone against Miami?

So was the fake punt by Florida in title game against Hogs.

You are so right about this play, Clay. Everyone (well…most everyone) remembers Reggie Fish’s mishandling of the punt that cost us a TD…a swing play in that game. But few recall that earlier in the same series. We had Florida at fourth and something like 5 yards (in other words…not just 1 yard) from inside their own 30 and they had a successful fake that earned them a first down.

The drive fizzled a bit later, but the added field position led to Fish’s fumble in the EZ which the Gators recovered for the immeidate TD.

That was a ballsy call at that point in the game, and it paid off big time for Florida. Without it, there’s a very good chance we win that game and Florida never is in the BCS Championship game, which they won.

Street to Peschel on fourth and three.

Nothing else is even close: We win the Game of the Century, finish the regular season #1, defeat Notre Dame in the Cotton Bowl, claim our second national championship of the decade… and I avoid many nightmares reliving December 6, 1969.

Actually, as pointed out by many on the 69 team, there were 6-7 plays in the Texas game that could have changed the outcome. The Street to Peschel pass was just one of them. So I disagree that nothing else was close.

So I disagree that nothing else was close.

Indeed, had clipping been properly called …