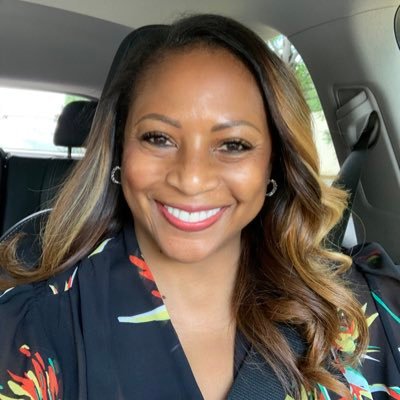 Next up NCAA Signing Day! Razorback fans you are invited to watch Chance go live on November 11th @11am #To INK THE DEAL! We are so excited!!❤️🤍 Mark your calendars!! https://t.co/Ush8kUxIuj 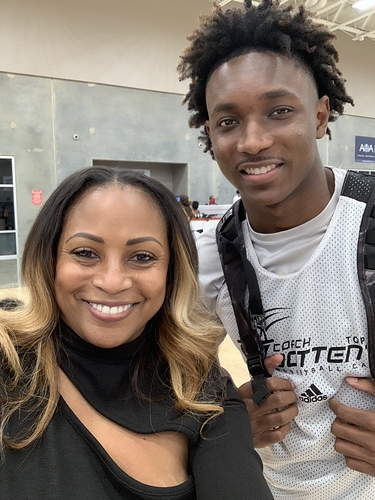 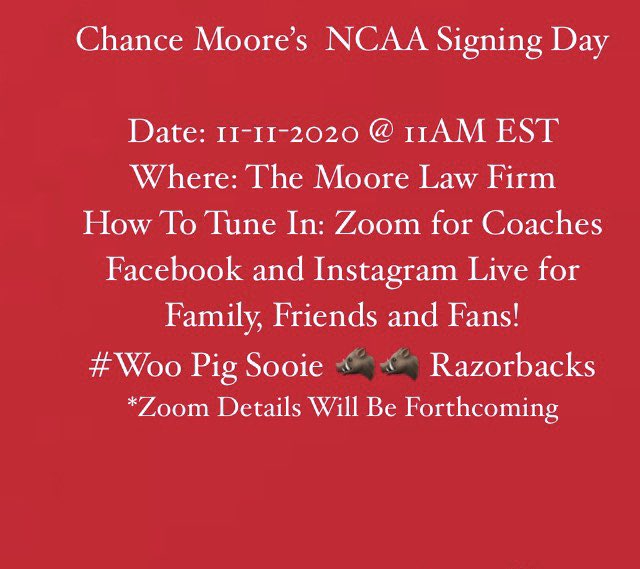 Yes! This day can’t get here soon enough for me. I’m so excited about Chance. I believe, even though he’s a solid 4-star recruit, that he’s still very under-rated.

I am not making a judgement at all. I don’t know how they rank them anyway.

I just rechecked the rankings and they have made it even worse.

And you point out that Coleman has him at #74 and I assume a four star.

247 composite is what RazorAg always tells me I should look at has him at #87 and a four star.

All over the place.

That is a swing of 77 spots between ESPN and Rivals.

I am not making a judgement at all. I don’t know how they rank them anyway.

I just rechecked the rankings and they have made it even worse.

And you point out that Coleman has him at #74 and I assume a four star.

247 composite is what RazorAg always tells me I should look at has him at #87 and a four star.

All over the place.

That is a swing of 77 spots between ESPN and Rivals.

As I always say, take ESPN’s evals with a grain of salt. They don’t see the kids nearly as much as the other services and they don’t update their rankings as frequently. Moore was moved down based on a number of early year and summer viewings. Reason: consistency and motor. I haven’t seen him multiple times live in that period so I can’t validate that’s fair. That said, both Rivals and 247 have said the same thing.

It is a concern that Rivals moved him down to a 3 star. I can’t wait to see him with my own eyes.

No one has ever answered this question for me.

Who rates these kids? Coaches, former coaches, players, mommas, people that nothing else better to do with their lives?

It is an occupation for some folks.

I believe people that work for these scouting services are basketball people that may be former coaches, players, broadcasters or journalists that cover basketball regularly like RD and DD. I bet you can be one of those since you understand basketball.

But I know what you are getting at. It is a judgement made by one of those. And sometimes they can be wrong. I don’t know what their success rate is. I bet the percentages of success is higher on the Top 40 or so kids.

More important is that it is just not us, but coaches use these rankings and star ratings. For example, I think Coach Muss uses it more than other coaches we have had. you can see that he mostly offers only 4 and 5 stars.

As far as the basketball and football rankings, each service has its lead guys who carry more weight than others, but all they all have several people that go to see the prospects participate in camps, games, practices, etc.

They also check with guys like Richard and myself to get our takes on the guys we see in-state and in our region.

Most have playing and/or coaching backgrounds. Some do not, but have developed reputations over the years for their observations.

It also would be silly to not think college offers are not factored into the equation and that they don’t talk to college coaches, ahem, informally.

As for the line about people who have nothing else better to do with their lives, scouts and recruiting writers take pride in what they do and put in tons of time in doing so.

Otis Kirk (football ) and myself (basketball) are proudly The Godfathers in this state when it comes to recruiting.

Doesn’t make us any better than anyone else doing it now, but we saw a need for news on recruiting and spent a bunch of our own money and time in the 1980s to build the brand and service so to speak.

We’ve both been doing this around 35 to 40 years each.He had a football recruiting newsletter and I thought there was a need for it and started writing articles for the Northwest Arkansas Times in addition to covering sports the so-called regular way.

Then along came Hawgs Illustrated, which we both contributed recruiting articles for and it begin to flourish.

Finally the two statewide newspapers - which obviously eventually became one - jumped on board. This after some higher ups ridiculed the idea of customers wanting to know about future Razorbacks instead of current ones.

It is now a flourishing industry that employs a lot of people and makes them money.

It may not be a doctor, nurse, lawyer, CEO, etc., but it does provide a service.

As I’ve posted several times, Chance was a high 4-star by all services at the start of his soph year. He had a major injury during his soph year. He was downgraded by some of the recruiting services, after that. Perhaps, they didn’t think he bounced back enough to suit them the next year. After that, there was no AAU last spring to re-rate him by. .

From what I’ve seen in game clips recently, he looks completely healed and with no hesitation in his game. He’s put up great stats in the Wooden top 150 recruits recently. Earlier than this latest Wooden event, he looked really good, scoring at will in a couple of other events. I assume that Rivals and 247 have not seen him late this summer and fall, primarily because of Covid

I am certain that Muss and staff have followed him recently in every event he’s participated in. Muss and staff appear ecstatic over his commitment and upcoming signing. I will take their evaluations rather than 247, rivals, or ESPN.

IMO, and based on what I’ve seen recently, the recruiting services have missed on him and we’re getting a big difference maker!

PJ, I also don’t know why you think Muss relies on these services before offering recruits, unless you have some inside information. Clearly, he has offered higher ranked recruits than Mike, but I think that’s because he believes he can attract out of state 4 and 5 stars to the U of A. He has a huge staff, and some coaches who have recruited at a very high level at other jobs. I believe that is who he is relying on rather than recruiting services.

I wasn’t referring to you and Otis. I enjoy the reporting of possible future Hogs.

However, I’m not a fan of assigning star ratings to teenagers. It’s impossible to measure heart, discipline and desire. Also, some kids mature earlier than others.

Btw, Otis isnt a fan of star rankings either ( at least he didn’t used to be).

It is a concern that Rivals moved him down to a 3 star. I can’t wait to see him with my own eyes.

Harley, Rivals and 247 have seen him a couple of times over the summer and then again at the Wootten Camp over the weekend. Besides the motor/consistency comment, I don’t know what they’re seeing/not seeing. But, they’ve seen him and dropped him further.

It’s a guess on future production.

Some are better at the guessing because they are more informed and try to take in the characteristics.

It’s just a way to say in our opinion this kid looks like a better player than the other.

Somebody can up with the star chart and it stuck.

Wouldn’t both of those be from his Junior year in high school. There were no aau events between Feb and June. All the clips of him I’ve seen were from Sept and Oct.

The highlights from Wooten Camp look good. I can definitely see the motor. As far as consistency, that is hard to judge from just the highlights. No doubt Muss likes him and I am not arguing about that. Just trying to figure out what it is that Rivals and 247 are seeing or not seeing. I am throwing out the ESPN ranking like a low score in Gymnastics judging. That is an an outlier. So probably us Rivals’ 130. I think he will probably eventually settle around Coleman’s #74 and kind like a mid-4 star.

As far as Muss relying on the scouting services, it is because I have not seen Muss offer players based on a big upside yet. Again his era has just started and it may come. But I just have a hunch that he is going to offer already identified 4 and 5 stars and if he can’t get them, hit the transfer portal. I don’t think he is into developing raw potential. I just don’t think we will see a Michael Qualls or Mason Jones come through here.

I am not saying that the strategy is wrong. In fact it minimizes the risk of wasting scholarships. Percentage of success with 4 stars is high and transfers have already proved themselves in Division One play. Muss probably won’t have down or rebuild years like the previous staff did.