“I am a High School football coach”.

At least he was honest about that all along… 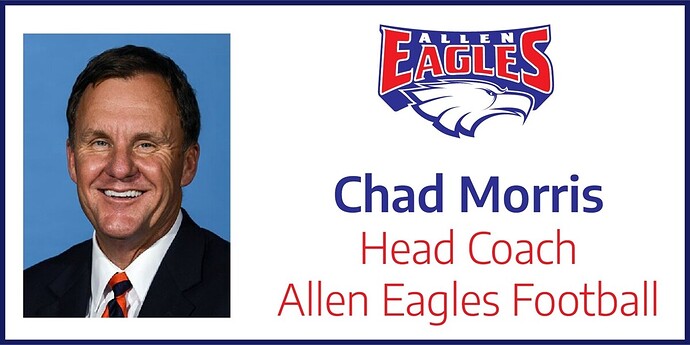 BREAKING: Chad Morris to take over at Allen

Does this have implications for our buyout?

Isn’t he required to seek commensurate employment!
Like Bielema?

Good for him. He was successful in HS and will be again. Glad to see him get back to it.

Where he should be. Wish him welll

Does this have implications for our buyout?

Isn’t he required to seek commensurate employment!
Like Bielema?

You know…that’s an interesting point.

On the one hand, there’s nothing wrong with him deciding that HS coaching is his true calling. On the other, it’s not reasonable for him to expect to be compensated by the U of A if he isn’t even attempting to find work at that same compensation level - which, I believe, is what the buyout language calls for.

I’ll bet the U of A attorneys will look at this.

You all are assuming there are similar or identical requirements in Morris’s deal. Every contract is different. Plus, he can’t coach his way out of a paper sack at the collegiate level. Let him do what he does. It’s our fault for hiring him. I don’t mind paying Morris under what ought to be a well drafted contract. I do mind paying Bielema under a poorly drafted one.

This time next year, the high school team will have 11.7% of the play book installed.

He needs to you recruit that middle school coach in Knoxville to handle his defense, Coach John Chavis.

My guess is that he tears it up at Allen. He knows what it takes at that level/has done it at that level, he will have tremendous resources and administrative support, and has the benefit of a student body/parent group that loves big time high school football.

All of which does not change the fact he was an incredibly bad SEC head coach.

All of which does not change the fact he was an incredibly bad SEC head coach.

And a pretty poor SEC OC too.

Bet this doesn’t help our recruiting. Allen is a powerhouse.

I’m not worried about recruiting with Coach Pittman! Casey Dick played at Allen, TX but that’s the only player we’ve had that I can find from there.

Casey Dick played at Allen, TX but that’s the only player we’ve had that I can find from there.

Jonathan Williams is from Allen. And Casey’s little bro Nathan.

Jonathan Williams - 4 Star Running back for Arkansas on HawgBeat

Good finds all. I knew Nathan was but did not find the others. With that said, I’m not worried about our recruiting because Chad Morris is there.

124k a year job will not meet AR contractual buyout clause standards.
So another court case looming or will this be cut & dried? Or reach a petty settlement ?

I would imagine they will settle. It makes sense for all involved.

Stipulations I guess is correct term.
Was getting late.

I would guess he’s applied for coordinator jobs. The fact that Foundation sued Bielema would provide Morris and his agent the kind of coaching to keep applying.

No one says he can’t take a high school job. It just says he has to try to find comparable positions. He did last year.

Are there Power 5 teams knocking down his door? I doubt it. Everyone here is all the proof he needs in court. We all think he’s a high school coach, right?

If they (Morris and agent) are not applying or turning down coordinator jobs, I’d be surprised.