I’ll post anything noteworthy in this thread. He has not yet entered the interview room.

Here is all the notes you need!! 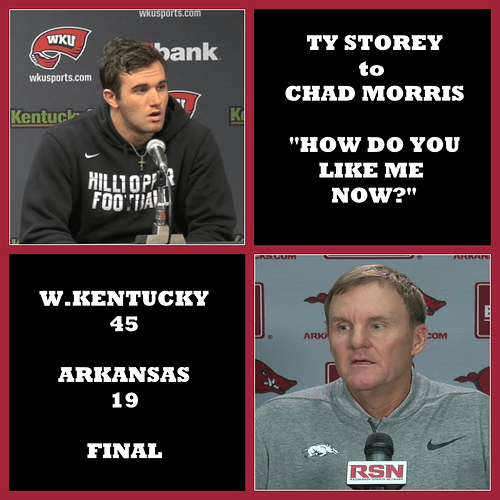 Outstanding. The word “Straw” after “FINAL” would work too.

Very disappointed we did not send our seniors out better than that. Slow start, couldn’t get off the field.

On Rakeem Boyd only having 8 carries: I think a lot of it is we had four possessions in the 1H, we tried to throw the ball a little bit. Time of possession had a little to do with it.

Defensive performance: They did a great job keeping our offense off the field and controlling the clock. I thought they did a good job mixing up the run and pass.

Unfortunately Boyd and Burks can’t play every position on the field.

This press conference is painful and embarrassing at the same time.

Morris: We’re asking a lot of 18 year old men to step in against some older guys. They’re having to grow up the hard way. We’re not where we want to be. It’s disappointing. We’re all frustrated with it. They’ll continue to mature, grow and develop.

On those deficiencies: We’re struggling stopping the run. We’ve got some areas there. From a depth standpoint, we have to create depth on both sides of the ball. That’s where it starts.

Morris: Hunter Yurachek and I talk each Sunday about the program. He and I will continue to visit.

I’ll give the press corp credit. They are asking all of the hard questions.

Morris: Trey Knox went out with an ankle in the first half.

JSJ and KJ did some good things. They will continue to get better. We didn’t know if KJ would be able to keep going. They shot KJ’s shoulder up, but when he got in there he played tough and moved the football. Wish we could have the touchdown pass back on Myron Cunningham’s holding penalty.

Morris: I think when you look at the outcome of today, it was very disappointing for all of us. We’re rotating guys in on both sides of the ball, and we’re trying to find the right fix. It was disappointing with the effort, and has been over the last couple of weeks. We’re going to continue to play these young guys.

Has anybody asked him why UCA is better than Arkansas?

Morris: We want to be one of the most explosive offenses in the country, but we don’t want to get out there and play at such a speed where we go 3 and out really fast. I knew this was going to be a rebuild. I knew it when I took the job. I knew just looking at all the other SEC programs and where we have to recruit to. We have got to continue to recruit, develop, and that’s where we are. It’s going to take some time. Everyone is frustrated with it. I am, too, but to get it right it is going to take some time in his league.