Six highest ranked conference champions, six at-large spots. Since there are only 5 Power 5 leagues, that guarantees a spot to the have-nots even if all six at-larges go to the big boys. First round games would be played on campus for the 5-12 teams.

And this gives us a shot. Under this format, we would have made the playoffs in 2010 and 2011. With the current four-team deal, we essentially have no shot ever, at least until Saban leaves Bama.

From The Athletic, but I’m sure it will be on free sites soon. 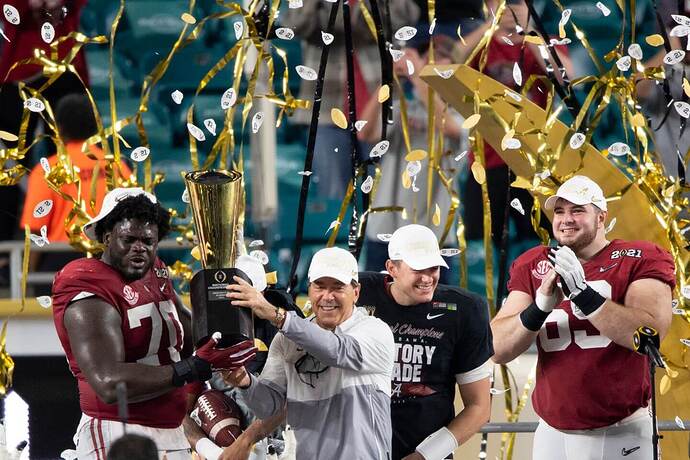 The 12-team format would include the six highest-ranked conference champions and six at-large spots.

Imagine #6 Arkansas hosting #11 Florida State in mid-December at RRS. Those Free Shoes boys wouldn’t know what hit them getting off the airplane, much less standing on the sidelines for four hours.

Further detail, which I find interesting.

Thus, for example, if an 8-4 South Carolina team somehow wins the East and then beats 12-0 Bama in the SECCG, the Chickens would not get an automatic bid and thus dilute the playoffs with a bad team (even though the Poultry at 9-4 is likely still better than the winner of the Sun Belt or C-USA). The AAC winner might get the conference champion spot that would have gone to Bama; Bama would still get in as an at-large, and the Chickens wouldn’t get in.,

Comes out to about 16-17 games if you make it to Champ Game.

If you play in a conference championship game, get in the playoffs as a 5 seed and win it, that would be 17 games. Get the bye, it’s 16 games.

Can they do away with conference championships or require them from all conferences?

I believe every FBS conference has one already, so there’s no need to require it.

I also read last night that the four byes are reserved solely for conference champions. So Notre Dame cannot get a bye. Neither can BYU or any other independent team (there are currently 7). Of course then ND doesn’t have to play in a CG so they would max out at 16 games.

I don’t get it other than public interest.

12 teams to find out what we already know by the time 4 are selected. 2-3 are really good and a debate over who is 4th best followed by a beat down of the worst 1 or 2 teams that made the top 4.

I guess the rare year when some Cinderella gets lucky and beats the usual 3-4 best teams in the playoff will make it all worthwhile for some.

Making a “playoff” after getting beat badly by one of the teams in the playoff doesn’t really add much for me, but I guess for some having the chance to figure out who was the 5-12 next best teams means something.

I’m sure this will get more eyeballs than the non playoff bowl games today and that will make it all worthwhile, but I think the playoff starts first game of the season and at the end of 12 games I’m usually confident who the best 2-3 are and don’t need a 12 team playoff to figure it out.

Of the 28 playoff spots since the CFP was created, five teams have occupied 22 of them. Six other schools have had one spot each. Most schools (including us) are essentially eliminated from playoff consideration by the end of September, and virtually everyone is out by Thanksgiving.

Whole conferences are being left out. The Pac-12 has had two bids in seven years. The Big 12 has been left out three times, and the only Big 12 team to get in is Mobilehoma.

And let’s not forget the entire Group of 5 has been completely left out. Zero for 28.

So let’s see who’s been left out: Fully half of FBS (the G of 5), entire conferences in the Power 5, and most of the rest of the P5. It’s been great for Bama and Notre Dame and Clemson and Ohio State, and ​has largely sucked for the other 126 schools in FBS. That’s not good for the sport.

Let’s look at an example we’re all familiar with: The Big Dance. Under the CFP model, our 2021 basketball season would have been essentially over after we lost to Bama on January 16. Putting it together in February, the deep run in the tournament, none of that would have happened. We would have gotten a mediocre bowl bid and that’s all. We weren’t good enough to win it all, but we were darn close, and we got the chance to show that in March. That can’t happen in a four-team playoff.

As always, money enters the equation. NIL is about to become a reality, and the Alston case, which goes way beyond NIL in terms of compensating athletes, is out there waiting for the Supreme Court to decide. And every school in the country lost a ton of revenue due to COVID; they need to recoup some of that, and expanding the playoffs is a way to squeeze more TV money out very quickly. ESPN does not want to lose the CFP and is going to pay to keep it beyond the end of the current deal in 2025.

I can remember when there were 16 major league baseball teams divided into two leagues.
The winner of each league played in the worlds series.

I sure like that format more than the present one with a larger playoff field that I frankly do not watch much.

However, I think college football needs a playoff system ansd I personally would make it 8 teams but I would cut the season from 12 to 11 or even ten gameas. And I would only include conference champs in fhe field with maybe one non league team.

Money, however, will determine things.

Well there will be groans when there is 4-5 SEC teams in it most years.
Better start getting some money to the players. 16-17 games is only 1 or 2 more than now.
But when major injuries start costing teams championships and players draft positions. The Holy Nat Champ might not be worth what’s a stake at the next level. Trophy for the School vs Lots of $$$$ in my pocket.

I think if the goal is to decide the national champ there’s absolutely no need for a 12 team tournament.

If the goal is to hand out participation trophies for all the poor conferences and teams who weren’t qualified based on performance to compete for a national championship but don’t want to feel like they missed the party, invite to your hearts content. I expect the final four to look just the same.

For the record I do think it will be nice for the coastal Carolinas to get to play a quality opponent to prove their metal.

The point is not whether the final four will change. It may not. Or it may; footballs don’t bounce in predictable ways. But they don’t bounce at all if those extra eight CFP games don’t happen.

But here’s the point you’re missing. Right now, if you’re a 5-star high school kid and you really want to win a national championship, you would be crazy to sign anywhere but Bama, OSU, OU, Notre Dame or Clemson. Thus the rich continue getting richer. But if eight more teams are getting their shot at the playoff, lots of schools (including Arkansas) can hang that playoff carrot in front of their recruits. 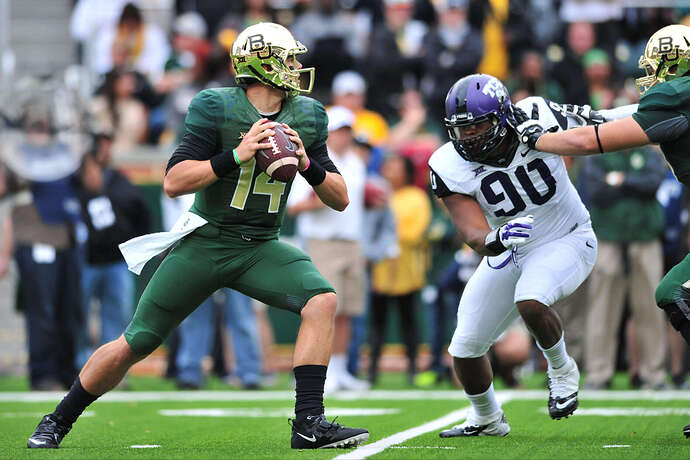 How would the 12-team College Football Playoff have changed the last 10...

If this had been the format since 2011, 44 programs would’ve reached the College Football Playoff at least once over a 10-year period.

Or, following your logic, let’s just cut the basketball tournament back to 8 teams; everybody else is a participation trophy. Right?

No on basketball because you depend on a much smaller average number of players so the odds of an underdog making it are much higher if you have just a few good players. In football a large number of exceptional athletes are required to play great defense and staff your lines. Hence the reason smaller schools aren’t going to out muscle the larger teams who just grind them physically. So no the ncaa bball tournament is not the same and why you see an occasional non blue blood win it all.

I’m also not buying the recruiting excuse as to playing for a national title. I’ll bet the top ten recruiting schools will change very very little both in ranking and the players they get. West coast players are coming east for exposure and great leagues like the SEC. Their fan base interest is less interested and it’s not the deal it is in the south and Midwest. A few players maybe here or there will stay home but it won’t be enough to make a difference.

I do think the portal has a bigger impact on distributing talent. The 3rd string five star qb at Bama isn’t going to stay there for 4 years as often and I think we can see that effect now.