Wallace was phenomenal in the leadoff role this week. It helped him earn SEC and national player of the week honors. Here is more: 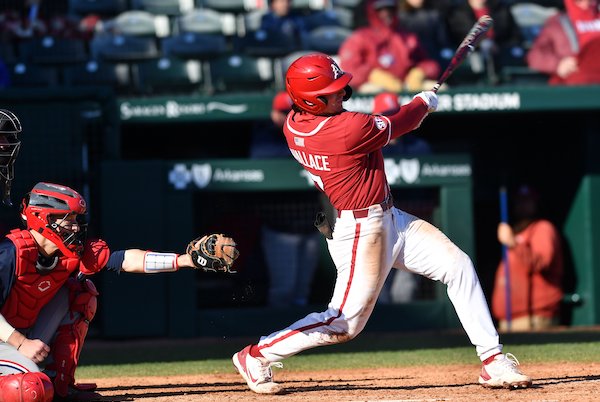 Arkansas third baseman Cayden Wallace shared SEC player of the week honors Monday after he hit three home runs and had 13 RBI during a series against Illinois-Chicago.

I know! who would have thunk it! He seems to come to bat right when we need him to,if he’s not in leadofff who knows how this series would have turned out.

Wallace needs to have men on base as much as possible when he comes to the plate. With him leading off he will also get the most AB’s. I like him leading off!

Wallace needs to have men on base

I agree, he’ll never have a chance for a slam.

I love getting your best player more at bats. Hitting first does that. Matt and I discussed who might be this team’s best player. He said Cayden. I must agree with him. Nice story.

Never is a very big word. How about less likely

About as big as always. I’m sure glad Wallace is a Hog.

I’m the next few weeks it would be ice to see Moore get rolling at the plate! Just putting the ball in play helps. You can’t win striking out like your hair is on fire.
10 plus K’s is way too many.

Big game Bob will show up when we need him. He’s trying to elevate too much now but he will get that swing squared away probably this weekend

I sure hope so! Big Hit Bob gets it going. I realize he has done it each year so far but this is his last year. It would be nice to win it all.

Yep, Bob is trying to yank everything out of the park, but he is baseball wise enough to settle down shortly.

exactly and why I don’t worry about him,he hit 2 on the screws against SE La and the wind knocked them down and I remember another one earlier so its not like he hasn’t ripped some balls but got nothing to show for it. I think he got frustrated and tried to launch(uppercut) a little too much.I wouldn’t be surprised if he has a big weekend bc he knows we start SEC play and its time to get rolling and I think he will.