Catching up with Nolan Richardson

This was a fun interview, catching up with Nolan Richardson: 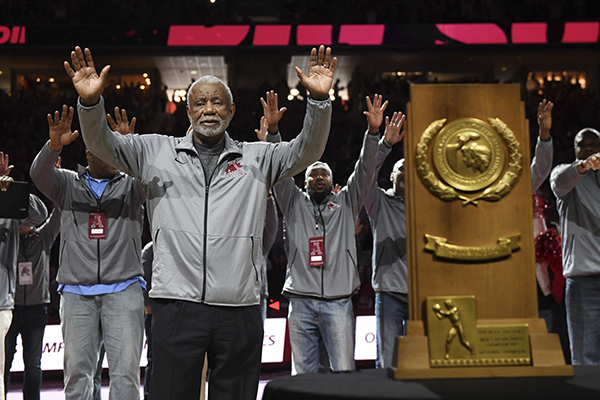 State of the Hogs: Reminiscing with Nolan Richardson

“It’s a Small World” was the song Nolan Richardson could have been humming Sunday afternoon when he revealed an amazing chain of connecting ties.

Clay, thank you so much. Great article as usual. You are like your dad super talented. I was one of many who could hardly wait each morning to read his notepad.

You made my day. Thank you!

Have to agree with Jerry, the Apple didn’t fall far from the tree.

It helps to pick the right subject.

You picked one of the most important persons in my life to interview, and you did it very well. Thank you, Clay.

Great article Clay. I had forgotten about the 1998 Coach of the Year honors.

I was pleased to see Nolan’s comments on playing hard. And his comments on this year’s team. I have been watching and supporting a Razorback basketball since 1974 and I can honestly say that other than few years of Pelphrey, playing hard has been a trademark of Razorback basketball. I have rarely seen a Hog team nit give 100%. That has carried me through seasons where we did not make the tournament.

Also I don’t know if it was a conscious decision on your part but it was good to see issues surrounding his departure we’re not part of the article. It is rare you see an article on Nolan without that.

Coach Richardson is such an Arkansas treasure. It’s amazing how he did what he did having to break new barriers all the way up. What a wonderful article on coach and his life. This made me think about how Rose took great care of him when he was consumed with coaching the Arkansas Razorbacks. Now he can do the same for her. What love they share.

Excellent, stories like this make these tough days better.

Nolan and I did not talk about the departure. It has been rehashed enough. Our visit was tremendous. He invited me to the house and I will go. We talked some about Tulsa days. I covered that team, too. We have a long history. We also visited on what he thought of my father. He’d shared that before. He said he was one of the few who bothered to ask for some definitions and explanations on his system on defense. Some of that could have been included. The Huevos, or eggs. It was what he called his scramble defense.

Donny, Rose has had diabetes for a long time, but worse, her spine has deteriorated. She has had many fusions. One leads to pressure on the next disc, until it’s about entirely fused. Mobility is gone. I did not get all the details but at least they are home together.

That is so tough. So much pain in their lives. Prayers for Nolan and Rose.

Sincerely thank you for an interesting and great article on Coach Richardson. I respect Coach and admire your ability to write honestly and in a caring manner. GHG!

Loved it. Just what we have come to expect from Clay. One of the few benefits from this down time is that Clay will probably do more of these without the pressure of covering the next whatever. I look forward to those.

Clay, I always wondered why Nolan has never been hired as an analyst on one of the many increasing sports channels. Seems like every coach that was fired ends up on a network. Or is it that Nolan was asked and didn’t like to do it or he doesn’t want to be away from Rose?

I think when Nolan says he’s been Rose’s care giver, you should know he can’t be away. He did not attend one of Mike’s games at St. John’s.

Yes, I know it is not likely for the last several years. But I was wondering about through 2012 or so when I think Rose was okay. I bet he would be a great analyst that will demand attention.

Good question. Not my area.

Rose has not been ok for many years. When I saw Coach at our 2009 reunion, I asked about Rose, and he said she was basically homebound. So sad to see that happen to such a sweet soul.

No question he does not leave her for long.