Can the Air Raid work in the SEC?

It would be interesting to see and I think we have seen it to work to varying degrees.

Given Leach may be a candidate, thought some might find this article interesting.

SwineFusion - I hope my posting this link meets with your approval. 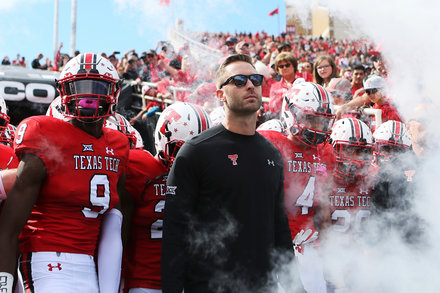 The Air Raid Offense Invades an N.F.L. That It Already Conquered

As Kliff Kingsbury and Kyler Murray bring college’s most productive passing offense to the pros, its creators have one nitpick: It’s been there for years.

It was a long time ago, but Kentucky made it work when Mumme and Leach were there.

That link is fine. Especially since it deviates from the normal Norvell fixation.

Thank you for your approval.

It was a new and shiny thing for D-I football when Leach and Mumme ran it back in the late 90s. Now spreads of one sort or another are the norm, so the “shock” value of the innovation has worn off. The Air Raid still works fairly well when the other guys don’t have good talent on defense, but I think it’s an inferior offense to the spread option/RPO heavy offenses that are more in vogue now, It’s just easier to run the ball out of those offenses than the Air Raid.

I think it’s a scheme, though, that’s easier to run without great, physically gifted offensive linemen.

Our history in this league and recruiting base tells me more often than not we won’t have great linemen and will be overmatched at the point of attack.

Our history in this league and recruiting base tells me more often than not we won’t have great linemen and will be overmatched at the point of attack.

We’ve had SEC caliber linemen, Ragnow, Swanson, Froholdt, Skipper. We just haven’t had enough of them.

We agree - they are the exception to the rule.

There were a couple more. We just didn’t have them at the same time.

Leach has moved up on my list of possibilities. He and Kiffin both have.

The fact that we have suffered through some poor offensive line play over the past, maybe more than a few, years does not seem to make Froholdt, Ragnow, etc exceptions to the rule, in my opinion. In fact I think in the not so distant past we have had some pretty good offensive lines and I do not see that it is impossible to have competitive ones again in the future. I think acceding to the thinking that the hiring process should incorporate the premise of poor offensive line play is a losing strategy. I understand that the development of the line will not be a quick fix, and there might be some offensive styles that might mask it a little better for some short term placebo effect, but to me it seems we suffered some some of this thought with Chad.

Yes, there were far more issues than scheme, and his style was different, but poor offensive line play regardless of scheme is going to be hard to overcome. Our ability to control the line of scrimmage severely limited the options in the passing game and it seemed that trying any sort of RPO was typically doomed because of the dline being in our backfield.

One has to give Leach his due, but I don’t see him being the fit to turn the program around. Cannot say he would not come in and give some short term relief, but I hope for more.

Air Raid pioneered the packaged play and rpo plays that a lot of spread teams run these days.

It was quite the innovation at the time, kind of the successor to the old run and shoot. I think it gave a lot of people ideas about what you could do with some of the basic concepts if you worked a TE or H-Back in more often and you had a QB who could be a real running threat.

But the Air Raid served as more of a starting point for the RPOs commonly seen in lots of high-powered offenses today. Leach and Air Raiders in general don’t run the football even tolerably well. Six out of the last seven years WSU has run the ball for 80 yards or less per game, and that’s just not enough.

Look at what TT did against ut yesterday with their Air Raid offense. If TT had tried to play a balanced offense, ut would have blown them out. If TT had a defense, they would have won the game.

Texas Tech does not run the air raid anymore

Texas Tech does not run the air raid anymore

Actually Yost in his 2nd year at TT continues to use a variation of the aid raid offense.

Petrino proved offensive genius can win a lot of games in the SEC… Leach is crazy as a bedbug, but he can make a defense look really bad when the talent is there at QB and receivers.

Petrino’s offense was much more balanced than we see from Leach, whose offense throws 50-60 times per game. Petrino’s teams had good run games. The concern with Leach is whether throwing the ball so much will work in the SEC. It did in the game at LSU and probably will in other games, but I think there will be some games where not being able to run the ball will be detrimental to his team.