Can someone explain Warren Nolan

predictions? It is all over the place. It seems to change by the hour. Of course, they not only predict wins & losses, but predict scores. I do not know why. However, I’d really like to know the formulae they use to reach their predictions. Last night they had us going 22-8 in the SEC. A few minutes ago they had us at 18-12–losing the next two at LSU, losing 2 of 3 to UGA at home, getting swept by TN, and then sweeping Fla. Go figure. 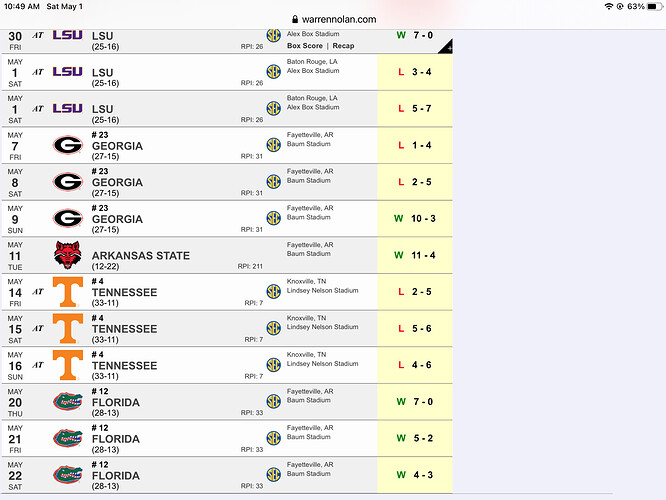 LOL. I think that’s as good a theory as any. I’ll go with that one.

Time to put down that weed!

That type of erratic thought and behavior is much more indicative of crystal meth I think than weed. If it was weed Warren Noland would be riding the Razorback Wave!

I believe you mean the National Weather Service.

A dead clock is right twice a day. Warren is changing so much, he’s eventually going to be correct.

The last 3 conference series the hogs will win the 2 home series against Georgia and Florida. The road trip to Tennessee will be tough. I won’t make a prediction!

Warren Nolan now predicts 43-9, which is 9-1 from here out. I feel fairly safe in saying that would win the SEC. Tomorrow it will probably be 40-12

The Hindenburg was recently spotted flying over his house…