Calling Clay, Swine and Dudley...trivia for which I do not know the answer

So I watched our loss in the 1980 Sugar Bowl to Bama recently (it’s on demand on DirecTV, which is where I recorded and watched it; it’s also on YouTube). Comment and then a question for the old heads.

The comment is that we actually played better in that game than I remembered. Yes - Bama was and played better, and deserved to win. But it wasn’t as one sided as I had recalled. In fact, it was a onc score game until midway through the 4th quarter, when Bama took a punt downed inside their 5 and drove the length of the field for the clinching TD - a true Championship drive.

But Kevin Scanlon had a better game than memory would have told me. I believe he finished 20 for 36 for about 240 yards and one pick…and he had at least 3 or 4 good passes dropped (or, in some cases, knocked out when Alabama DB’s treated our WR like pinatas). And we actually made some plays on the ground, too. But it ended up reminding me of too many Texas games, when we had a very good all around team - a legit Top 10 team - but just didn’t have the overall size and muscle to last the whole game against them.

So - here’s the “trivia” question; I noticed during the game, when they’d show close-ups of our players on the field, that all of them had a thin BLUE stripe - maybe 4 inches long and a half inch wide - on their right sleeve. Not the left - just the right.

I’m wondering if anyone remembers that and WHY we would have such a thing? It almost seems like we had a “typo” on the jersey and wanted to cover it up - but it so, why a BLUE stripe and not red??

Scroll ahead to the 40:00 mark of the video below, and as the Hogs break the huddle you can see the stripe on everyone’s right sleeve.

I covered that game but I don’t remember anything about the blue stripe.

I covered that game but I don’t remember anything about the blue stripe.

I’m guessing that the only two people who MIGHT know/remember would be Holtz and Rick Schaeffer. Or maybe Kevin Scanlon. Billy Ray Smith was on that team as well.

But a senior on team said it was supposed to be a series of “blue” American flags to show support of Iran hostages but it stretched out into just a blue stripe.

But a senior on team said it was supposed to be a series of “blue” American flags to show support of Iran hostages but it stretched out into just a blue stripe.

During the game video, there was quick commercial (the game was originally broadcast on ABC) for that evening’s show with Ted Koppel about the hostages. Hadn’t thought about it in a while, but that very situation is what launched the show that eventually was named Nightline". At first, it was just a nightly update on the Iranian hostages - no one knew how long it would drag out. But as it went on month after month, it carved out an audience and Nightline still survives to this day.

Another senior said it was planned to be blue flags but it ended up just being blue stripe. But it was about the hostages.

Another senior said players wanted blue flags, but that Lou said blue stripe would work. So that’s what they got, a stripe.

Interesting that three seniors had slightly different memory of how it happened.

I attended that game as a fan.

The Newport booster club provided a bowl trip for us after each of my three high schools seasons.

The first one was to Dallas for the 1979 Cotton Bowl - the coldest I have ever been in my life. 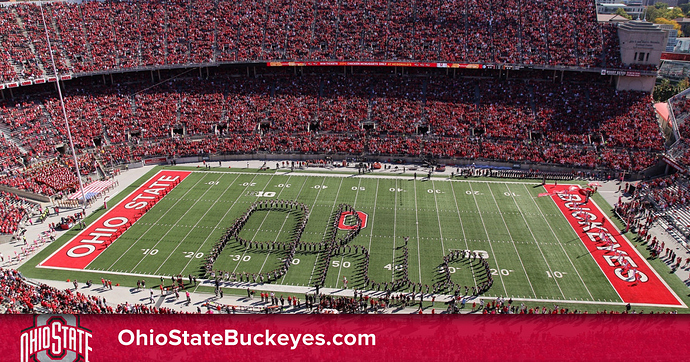 Another trivia question from that game. Which player had a dream about the game the night before which came true and Coach Holtz made a famous humorous story about how it influenced his play calling?

The first one was to Dallas for the 1979 Cotton Bowl - the coldest I have ever been in my life.

This was the season right after our big win over OU in the Orange Bowl (1979 Cotton Bowl was played following the 1978 college football season). After that win, and with all we had coming back that season, I just knew we were going to win the SWC and play in the Cotton Bowl…perhaps with a National Championship (mythical, as they all were in those days) on the line.

And if that happened, I was going to be there. Issue was that I at that time was not a regular buyer of Cotton Bowl tickets - who (like most major Bowls) has a system where (like season ticket buyers) if you purchased a seat the year before by a spring deadline, you had first right to renew the next year. If one wasn’t part of this group, and wanted good seats, the best recourse was to hit the scalpers and pay whatever the market was for them.

But there was another way. Corporations could by packages (presumably, for their clients) wherein they got a few “midfield” seats, most in the upper deck or around the 10 yard line, and then some in the EZ. All the tickets were the same price - I believe it was $20 or $25 face value.

So I bought a package with something like 25 or 30 seats - 4 midfield, maybe 15 other “yard line” seats and 8-10 in the EZ or upper deck. The idea was that I would keep the 4 midfield seats, and would have no problem selling the other tickets I had at face value to fellow Hog fans (I knew plenty, and if they didn’t buy them all their network of friends back in Arkansas would surely gobble them up at a non-scalping price).

Even if Arkansas didn’t come, I figured I wouldn’t have much trouble making most if not all of my money back if it was s good match-up involving Texas and Tennessee or whoever. Might even make a little pocket-change. The plan seemed fool-proof.

But first, we didn’t win the SWC. Houston (and their notoriously poor traveling fans) did. Notre Dame helped somewhat, but it wasn’t a “Championship” type game so they didn’t come to Dallas in nearly the numbers they usually do. And finally, Dallas had a freak ice storm hit a few days before the game - worst in 30+ years.

Bottom line is that I took a big bath on the tickets. Wrecked my car about 3 AM that morning coming home from a NY Eve party when another car ran/slid through a stop sign when I was literally 100 yards from my apartment - bashed into the passenger side of my front-end, and then they drove off! After dealing with all of that until about the time the sun was coming up, I watched the game from home, using some of the unused Cotton Bowl tickets as tinder for the fireplace.

I remember running into some Newport players and Coaches on Bourbon Street a day or two before the game. If I remember correctly (and my memory tells me things that aren’t true!), I ran into Coach Jones, who had been at Paragould under Coach Keedy (don’t know of I spelled correctly) and had later joined Coach Keedy at Newport, and he was drunk as a skunk.

This was from the Arkansas Democrat the next day:

NEW ORLEANS — Arkansas players wore a blue armband on the right sleeve of their game jerseys at the Sugar Bowl Tuesday in honor of the Iranian hostages.

Combined with the customary red stripe at the bottom of the sleeve and the white road jersey, the effect was a red, white and blue salute to the 50 Americans held hostage at the U.S. Embassy in Tehran.

Holtz said Tuesday he was first opposed to the idea, but changed his mind and allowed the armband.

Kevin Scanlon told me the thought presented to Holtz was that a string of American flags would be sewn into the sleeves of the jerseys. But, Holtz shot that down. Later he relented when more players came to him and he said that a blue stripe would provide sufficent “red,white and blue” for a flat like effect.

Kevin Scanlon told me the thought presented to Holtz was that a string of American flags would be sewn into the sleeves of the jerseys. But, Holtz shot that down. Later he relented when more players came to him and he said that a blue stripe would provide sufficient “red,white and blue” for a flat like effect.

Ironically, it was essentially unnoticed and never mentioned to or by anyone participating in this thread (which includes some very longtime, very die hard Razorback observers) until here and now. Looks like the team and perhaps their families were the only ones who knew or noticed it.

I can say, for my part, in no way did it remind me of or invoke the image of an American flag. It was just confusing - a blue stripe on a Razorback uniform?? If that’s what they wanted to do - and I’d have supported it (had I known of it) - why didn’t they just put either a regular red/white/blue or blue and white flag on the sleeve? The blue stripe by itself makes no sense at all, UNLESS it was a recognized “thing” that everyone around the country knew and was doing at that time…kind of like the yellow ribbon thing in the Vietnam war.

I remember noticing the stripe during the game but never knew anything about it. Since I was in New Orleans, I didn’t see the Little Rock papers the next day.

Well apparently the commentators doing the game were clueless about it or “everybody on this board” who watched and/or listened to the game never heard any reference to it. Or just don’t remember it, that was many moons ago also.