I get the sense the Bud Walton Arena renovation will be the next major building project for the athletics department. Hunter Yurachek told me last week that it will be at least 3 to 5 more years before that is completed, which is the same timeframe he referenced during a Chamber of Commerce meeting last year. It will depend on the start time, which is still TBD.

Here are some other specifics I’ve learned about the arena renovation:

It is likely there will be a reduction of about 1,000 to 2,000 seats from the overall capacity to make room for new premium-seating areas. It is also likely the renovation would last two years. Work would begin as soon as the final home game of one season finishes, would be paused when the next season begins and would be completed during the following offseason.

Did he indicate that BWA would be made more concert-friendly as well? That building sits empty a whole lot. Gymnastics will help (and I’ve been predicting that for a while), but there’s spring, summer and fall without much going on except for Walmart.

I understand the premium suite seating. Just Wish they would not keep reducing capacity. Seems they took out seating for press at one point years ago.

At this rate we are going from originally approx 20k arena among largest and loudest in country down to 16 or 15k.

Did he indicate that BWA would be made more concert-friendly as well?

I’ll have more on that before the Garth Brooks concert in a few days, but the answer essentially is TBD. The Garth Brooks show is kind of a test balloon to see if the UA wants to have more concerts moving forward.

I understand the premium suite seating. Just Wish they would not keep reducing capacity.

Without making the building larger, I don’t think there is any way you can add premium seating without reducing from the overall capacity.

Fair enough. Texas’s new building is at least as much a concert venue as a hoops arena. Maybe more. I understand that BWA wasn’t built for the same reasons as the Moody Center, but NWA needs an indoor music venue for when it’s too damn cold/hot for AMP.

The trend is to downsize and add premium seats. Kentucky did it. So did Tennessee. Auburn built a whole new arena that was smaller than Beard-Eaves.

Premium seats are wider with more legroom. Only stands to reason that you can’t cram as many of them into a given space.

NWA needs an indoor music venue for when it’s too damn cold/hot for AMP.

I would add “wet”. My first concert at the AMP it rained. I’ve been fortunate enough to buy seats that are somewhat covered after that first experience.

Oh man, Wax! I can’t wait until you have a suite to watch games from.

At the very least, BWA is in dire need of refurbishing. I go to at 80% of the home games each year, they’ve done a few improvements over the years, hand rails down the aisles, new scoreboard, ribbon boards; but those restrooms I swear haven’t been touched since 1993. Stall doors may or may not latch, toilets may or may not flush, the hand washing “trough” only works on certain sprinkle heads, and the water is ice cold. Seats have gotten loose, seat cushions torn. The place is just ready for a remodel. It’s looking tired and worn. It’s no longer the nicest arena in the conference. Baum Walker Stadium and Razorback Stadium have both had multiple upgrades done to them since BWA was built. It’s basketball’s turn now. And before anyone says “what about the practice facility?”, that’s just an accessory to the program, football and baseball have built more than their share of the extra workout venues.

Of course you are invited, Tusc !

Just Wish they would not keep reducing capacity.

They haven’t reduced capacity yet, at least officially. The media was moved into the corner and high dollar Gucci seats put on the floor in their place. I would be surprised if the two counts exactly matched, but official capacity remains 19,200. Although I have found the figure 19,368 a few places (including the BWA Wikipedia page, but I’m not sure where that comes from). The Wiki page says capacity has been 19,368 since 2009, which is about when Gucci Row was added.

I think you mean Jan is invited and I can tag along.

After his first National Championship it may well happen.

Aloha,
Any chance of improved seating for students? It appears to me the allocation and location of student tickets has decreased since I attended the UA 40 years ago. Not just at BWA but also at RRS and Baseball too.
UA…

They’ve greatly increased student ticket allocation s for football and basketball over the past 10 years when both programs started struggling. Now admittedly they are upper level seats, but the students won’t show up unless it’s a big game, or if the team is really good. I consider them much more “fair weather” and “bandwagon” than the loyal season ticket holders.

Guy, weren’t students in those south end zone bleachers in RRS when we were there?

There really is no student allocation to speak of at Baum. I think now they put students in the Hog Pen. When my son was there (2010-14) there were a few student seats under the overhang down one of the baselines, first come first serve (and rarely occupied).

Jist received a text from a friend at the new UT Arena. Already giving it a bad review on the sound quality. George Strait tickets were going for $1500 for floor seats.

Aloha Jeff,
During the late 70s and early 80s, at RRS, students enjoyed seating in sections N, O, P and Q. Apparently the vast majority of students have been gradually isolated to only Q and perhaps a little bit of P.
At Barnhill, the vast amount of the northside was for students only. Today, vast amount of student seating is in the corner with little sideline seats.
For Baseball, well, it was basically any empty seat. However, today, student seating is in the outfield.
I don’t know when the changes took place. Perhaps during the Long era when he was in search of income.
Be as it may, IMHO, students should have better seating than what they currently have. It’s their fellow students. It’s their university.
UA…Campus of Champions

During the late 70s and early 80s, at RRS, students enjoyed seating in sections N, O, P and Q. Apparently the vast majority of students have been gradually isolated to only Q and perhaps a little bit of P.

I don’t remember where N, O, P and Q were; they haven’t been called that since the first expansion in the 80s. Right now, students are in all of 125 and 126, in the upper deck sections behind that (still sideline), and overflow to the roof of the south end zone. I used to sit in 124 just across the aisle and I promise there were no old fogies sitting in 125.

I do remember that in the late 90s, students had end zone bleacher seats before the SEZ project was built. That long predates Jeff Long.

Green is the students areas. 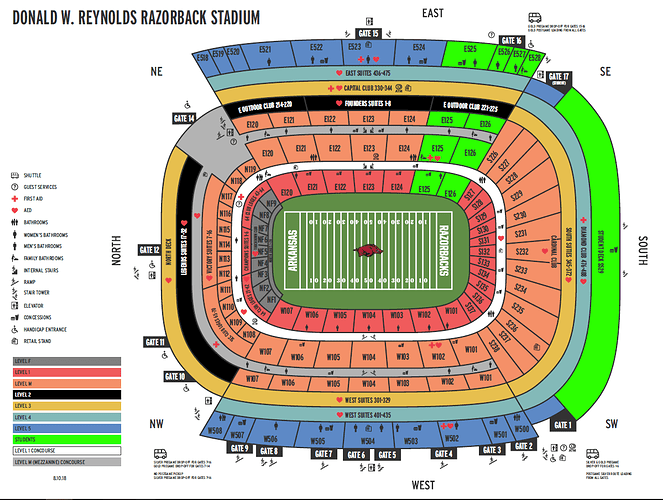 I would say that the students generally fill 125 and 126, don’t fill the UD sections behind them, and very rarely are there enough to go on the roof. So why give them great seats they aren’t gonna use? The same has applied for basketball; I’ve seen plenty of games where the Trough was rather sparse. Maybe Muss has fixed that; I hope so.

Gray areas are the student sections. 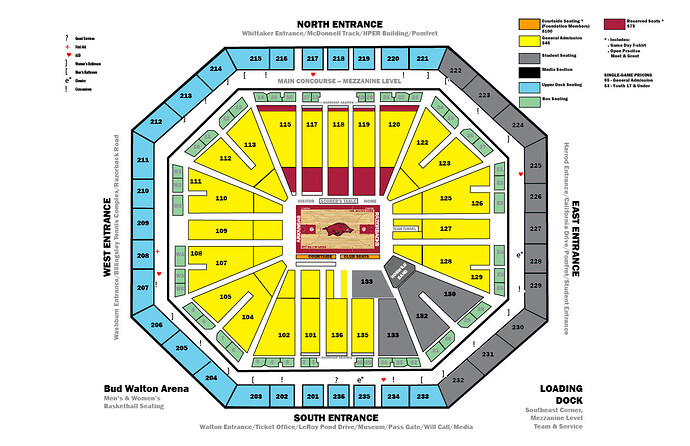