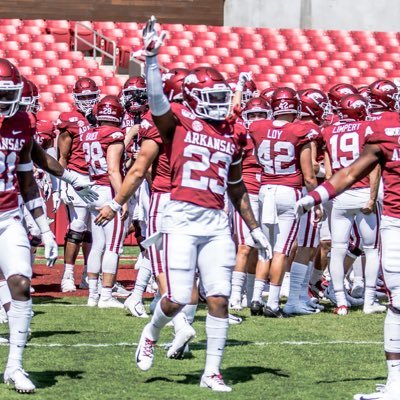 After speaking with my parents and coaches, I’ve made the decision to officially enter the transfer portal. Thank you Coach Morris and the staff for all you have done 💯❤️

The climate of college football.

It’s college football in general. The NCAA has opened things to give players more of a say. Some see it as a good thing and others like myself don’t.

The microwave generation does not do well when things don’t go their way.

Lol, like the older generation is any better. Read this board

The coaches were in favor of it and the redshirt rule. Blame them.

We sure don’t need to keep losing players. This is very very frustrating!!! We ain’t never going to be good again. Maybe we do need to change to another conference. I have watched Hog football for 50 yrs I have never been this frustrated .

He’s been thinking about it for awhile. It is one of the factors that went into Jamie Vance de-committing.

He appeared on the participation charts in four games and had no stats, and apparently did not make the trip to Kentucky. My guess would be that he was probably told he would probably not be playing any more this season. He enrolled early and went through spring practice, so I’m sure he was pretty disappointed in not being in the top four or five corners, considering his offer list.

if he cant get in the rotation on that defense, then he must be a non tackling coverage guy.

He was on the 70-man travel roster to Kentucky. But yes, I’m sure he was not happy with how things were going for himself.

how was Morris supposed to keep the kid here? Are you saying he was better than who has been starting?

I just don’t get it. I thought he was one of the up coming freshman that would make an impact. He was helping turn this team around. His name has been mentioned a lot. If everything is so positive, why would he leave?

Never said that - but Morris told us they were bringing in kids who believed in their vision and were changing the culture.

It’s just one more indicator of the train wreck that’s in progress as we speak as are the recent decommits with more to come.

jackson, lets say all of your doom and gloom is true, you do realize that the disaster may take YEARS to fix. At some point you have to stop the insanity and let someone/something take root and see if it will actually work.

as to those who think HY and mussellman is gold, what happens there if he doesn’t win 20 games?

When it rains, it pours

It’s going to take years with the right person - if I’m HY I damn sure want to have my handpicked coach I absolutely believe in.

If he doesn’t absolutely think that’s Morris he needs to make the move.

I think we will find out this year. I’m expecting NIT this year. I think size will be a major hurdle this year. I do expect NIT (17-19 wins, and a few wins in the NIT), but I also know you’re gonna be dead on if he doesn’t win 20 or make the tourney. People will say HY screwed up that hire as well.

I am sure that HY is trying to figure how to help Chad Morris succeed, that is what the program needs, but there has to be some eye candy on the field, we need to seem some offensive firepower, we are not with out weapons, the least of which would be QB. The other profile spots have some good players in place. dont understand, we were terrible offensively Sat nite. had a 75 yd td run and a 30 yard td drive. that was it for TDS. As far as Mussleman, he is going to have his hands full this year with a team that the tallest player is 6’8", it will be interesting to watch him coach that team.