What an effort! I remember a couple pass breakups too.

I think there were at least three passes he got a hand on. Official stats at the Moo U website credited him with two though.

Pool is the fifth Arkansas player to record 20 tackles in an SEC game, and the first since Jerry Franklin in an overtime game at Mississippi State in 2010.

Currently Bumper Pool is #1 in the SEC in tackles followed closely by #2 Grant Morgan. 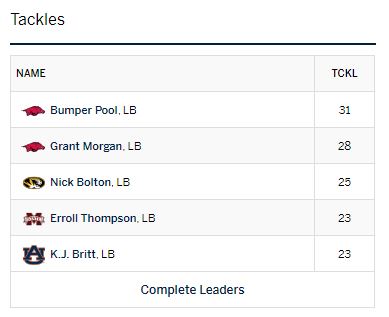 Bumper plays so hard and with such a zest for the game. That is uncommon.

Bumper leaves it all out on the field. I enjoy watching him play. The pass break ups were huge! I know he was tired and wore out after the game.

Grant Morgan reminds me of Tony Bua for some reason. Bumper Pool could be one of the best LB’s we’ve ever had. I hope so.

I think Spaight ran a 4.97 at the NFL combine. Instincts can make up a lot of space vs a guy that doesn’t have good instincts. I think there was a LSU All American LB that ran like a 5.01

He was amazing!!! Just hope he can stay healthy.

Exactly RD. Football speed is not overrated, but 40 times are.

LB was the big area of concern for me coming in, they have been an unbelievably pleasant surprise so far.

If he can sustain that level of play, he will be gamed an all American…