RD do you think he is one to watch? In a national article that came out about the Hogs today he was actually mentioned as one we were after and he was the only potential recruit that got a mention. Made me wonder. Also fits the mold of a guy Muss has played against/recruited at Nevada I believe.

He’s one to keep an eye on.

He’s been in the portal about 6 weeks. Any buzz about why it’s taking so long for him to commit. Just about every school has offered him. Has he also entered his name in the draft?

Tops out at about 6’4" which is likely generous. Does he play well around the basket? Leaping ability?
I’m, in my basketball ignorance, thinking we are trying to bring in a power forward size fellow to bulk up our inside and add depth there. 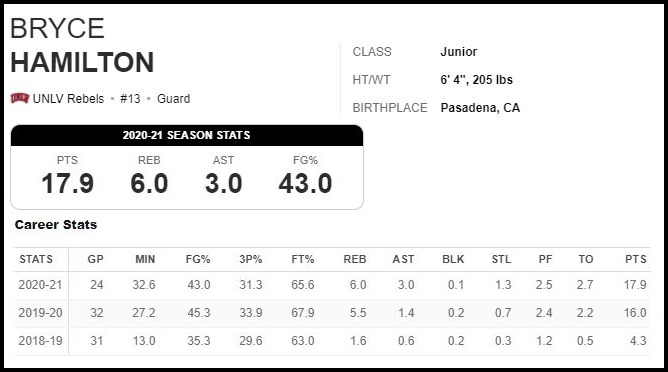 Remember, we still have 2 spots available. They don’t both have to go to a big.

A guy who averages almost 18 points is someone I’d keep an eye on, regardless of size.

Votan, just wanted to say thanks for putting up the stats.

And again, my bad for not realizing that you were doing it for them all.

And again, my bad for not realizing that you were doing it for them all.

no worries at all

The way our roster is stacked right now, I don’t see us getting anyone that started consistently for their previous team. It will have to be someone with a profile similar to Jaxon Robinson.

Somewhat true pjhawg but keep in mind our recent elite eight exposure.
Advertisement like that can bring them out of the woodwork.

They don’t have to, but they both should. Our frontcourt has basically been decimated this offseason.

The only impact frontcourt player we lost was Justin Smith. I would love it if Muss could find another Smith-type player and add Hamilton. Too me, that would be a home run, but this team is already so stacked. I think Muss is putting a great deal of thought into his depth now.

While acknowledging that it’s dangerous to make decisions solely from stats (and never having seen him play, as I’m sure our coaches have), I don’t see the attraction UNLESS he’s a lock-down defender (and his Steals/blocks don’t indicate anything special). Pedestrian shooting from the perimeter, sub-par FT shooter and poor assist-to-turnover ratio.

What am I missing?

I saw the rebounds…but discounted the points because with a team that has the scorers and shooters this one will have, he won’t be depended on to score.

Mawein was a big loss. Lot of talent there.

This is only my opinion, but I don’t think Muss is gonna recruit the JC’s real hard. I get the feeling that he wants D1 transfers or HS frosh. I think he took Mawein at Patrick’s suggestion, but wasn’t devastated to lose him, since he can find a more polished player in the portal. Mawein seems to have good upside, but he is still very raw. Again, just my opinion.