Next week when the Razorbacks play football at Starkville, the broadcast team is traveling like country music stars.

SEC protocol for team travel eliminated the seats on the plane for the radio crews this season. So Moore stepped up and offered his bus for the essential members of the IMG radio team that does broadcasts for Arkansas football. Part of the crew that does the pre-game and halftime shows will stay behind. That’s part of the limits on press box personnel.

That will be sweet, it has to be a nice bus…

It is REALLY nice. I’d love to go with those boys. I’m driving solo to all five road games. Jean Ann might ride with me to some, although won’t go to games. First time ever we are not allowed a photographer. We get to use AP or a pool photographer. Working on another arrangement, too. We’ll have plenty of photos for the magazine.

That’s awesome, and he such a great guy and loves his hogs!!

Now that is cool!

I didn’t realize Matt Zimmerman was on the football broadcast as well. Is this something new or have I been out of the loop?

Matt is the spotter. This is his second year to do that. 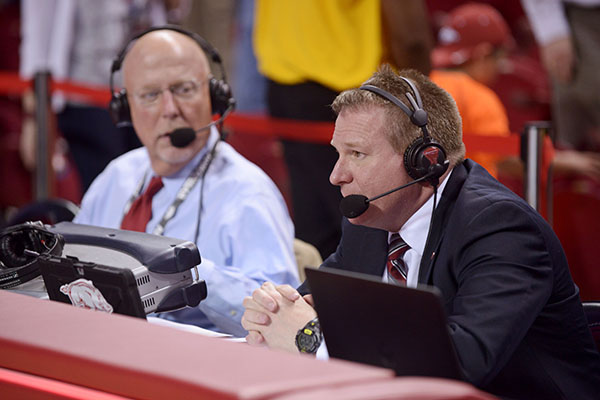 Back on air, Zimmerman still calling the Hogs

Matt Zimmerman knows his position is unusual. Now in his 4th season as the radio analyst, Zimmerman is 8 months removed from being let go by Arkansas.

It’s easy to pull for guys like Zimmerman! Really good read! Thanks Matt

Where is Geno Bell?

Geno is going to be part of the broadcast this year, for sure on the pregame and postgame shows. I’m not sure if sideline reporters are going to be allowed on the field this year with the exception of TV.

Sideline reporters not allowed this season.

Heard Chuck was the PA at last week’s Clarksville game. Big deal for the team and fans.

Tara Talmadge is listed as the sideline reporter for our game, fwiw.

Chuck has spent time this summer in Clarksville remodeling and repairing his mom’s home. I imagine he’s getting it ready to be sold.