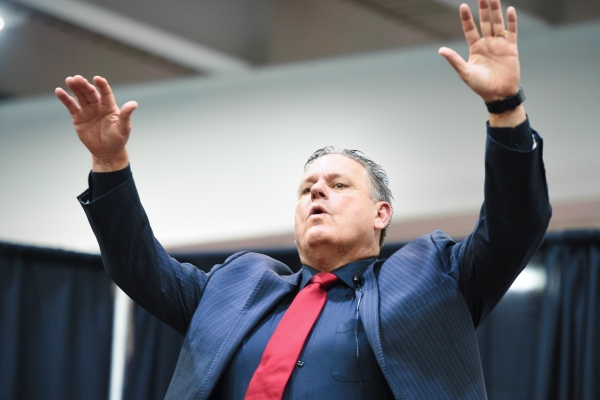 Arkansas landed the commitment of defensive lineman Andy Boykin on Sunday in large part because of his relationship with Coach Sam Pittman.

I think he has a chance to do well because he can recruit and he has people on his staff like Barry Odom and the head junior college coach to help him with a game situations… why I have never been against him it’s all about recruiting.

wow, that’s a nice read, great to hear GA hs coach has the same opinion we do!

I was glad Pittman picked Georgia. At the time when he left Arkansas, I said to myself, “I’m glad that’s where he’s going there.” My reasoning, Arkansas won’t often play Georgia and if they do it’s likely to be in the title game. Of course, that didn’t ever come close to happening on Arkansas’ end.

But I didn’t dream that the real reason I should have been glad is that he would have four years to build ties in the state of Georgia. Athens is close to a lot of good football players in that state. And, most of them go to camp in Athens each summer. The way Kirby Smart recruited, there were great Georgia high school players in their building almost every day. Sam was the lead man in recruiting with a lot of them, just because of his big personality.

I don’t think most of us understand how many good football players there are in Georgia right now. The first person to convince me about the wealth of recruiting in that state was Jim Washburn. Now Jim was doing some great work in East Texas and that is where he spent almost all of his time. But he told me, I could probably do better in the Atlanta area because there are just more players in close proximity. He’d learned that when he was coaching at South Carolina.

And the thing about Georgia players is that they grew up mostly die-hard SEC fans and that is where they want to compete. Not all, but most.

In east TX you will always be battling those families and coaches that feel loyalty to the Texas schools and the Big XII. I know the ACC hits Georgia pretty hard too but there are a lot of players there to go around (just like Texas).

The hogs need to get talent from Georgia but we can’t afford to forget about Texas!

And the thing about Georgia players is that they grew up mostly die-hard SEC fans and that is where they want to compete. Not all, but most.

In east TX you will always be battling those families and coaches that feel loyalty to the Texas schools and the Big XII. I know the ACC hits Georgia pretty hard too but there are a lot of players there to go around (just like Texas).

What you say is true. But the SEC has the trump card (pardon the term!) because it is THE undisputed alpha conference and has been as long as today’s recruits have been alive. They’ve never known a period when the SEC wasn’t the baddest conference in the country.

It’s sometimes hard to leave your family girl friend and others - but the lure of the SEC wins more of those decisions than it loses. And with Arkansas, A&M, Mizzou and LSU - in particular - some kids in the Big 12 footprint don’t have far to go to play for an SEC school.

The ACC hits it hard and there is Georgia Tech there. But, Georgia Tech is not the threat in Atlanta that Clemson is. Still, there are lots of players in that area, more than most of us can fathom.

They’re not all going to Ga. There are 4 5* with one each to Al, LSU, Clemson, and Ga. There are 30 4* with 6 going to Auburn and only 4 going to Ga. - then 3 each to LSU, Clemson, Tn, and Al. Georgia builds it from the pound ball up. From the first grade they run the same offense as the High Schools. It’s amazing to go to a high school game and see more than a 1/2 dozen D1 recruits on the field at the same time

I have a nephew and cousin who play/recently played FB and BB in Atlanta 'burbs.

Always fun to watch SEC games with them. Watching a Bama game, Matt says that their safety played his team in hs:“he trucked me!”

Nephew’s team played against Trevor Lawrence and Justin Fields in the same season! Many many more. just unreal the talent there.

I have lived in Buford Georgia since 1996. We are about 45 minutes from Athens and 30 minutes from Downtown Atlanta. Buford has won many state titles (11 since 2001) and sends many Seniors to D1 schools each year. They have players coming in from all over the country. HS football is on another level around here for sure…