Against NJIT, Vermillion won’t pitch this weekend, he has fluid on his elbow/arm? DVH said they are trying to get it out. Slavens won’t play tomorrow.

Here is more from what Van Horn said: 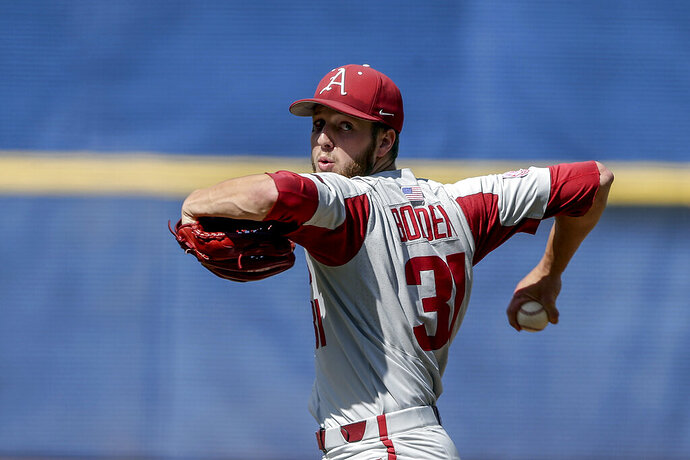 Bolden to start, Slavens will be held out Friday

Dave Van Horn announced the Razorbacks will start right-handed pitcher Caleb Bolden in the opening game of the Fayetteville Regional on Friday against NJIT.

I am not surprised with all the RH batters they have,just hope he’s on and keep the ball out of the Middle.

I’m confident we’ll score several runs. Thing is, if Bolden falters early, we have a good enough BP that we can go to it. I don’t expect that to happen, though. I wouldn’t be surprised to see Caleb go into the 5th or 6th inning.

What does fluid on the arm indicate for ZV? I gather that’s not too serious, but something must be injured or he wouldn’t have that fluid

I am confident we will score too,their guy pitches to contact and assuming we will make contact ,a few of those may not come back

,teams batting .285 in their league off him,come out swinging boys get up early and enjoy the day.

It’s inflammation, which has to subside. Think of it as a little bit of swelling. They can do treatments that will help but he’s not ready to go yet. Sounds like he could be ready for the super though,

Can I read anything into the language in the headline saying Slaven will be “held out”? Is that different from “not available?” Was it maybe in maybe out?

I think that means they’re doing it out of caution rather than absolute necessity.

I wrote the headline. I didn’t mean for anything to be read into it.

Thanks Matt! Just me trying to be optimistic.

I thought the headline accurately fit the article and that Slavens is being withheld more out of caution than necessity.

I read the quote from CDV that he wasn’t playing because the injury is to his front plant foot and the twisting required for the follow through of the swing wouldn’t allow him to hit.