Is he close to being back?

Where was Tole this weekend? Is Nick Smith out of the mix in the bullpen?

I think it’s Nick Griffin!
I thought Bohrofen was going to be a game time decision of Friday. That didn’t happen so it could have been the miserable weather played a role in the DNP!

Bohrofen was going to be a game-day decision whether to put on the 27-man roster at Missouri. I’m not sure if he was put on the roster, but he did not play. From all indications he is very close to returning.

Tole seems like a midweek pitcher to me right now. Griffin has struggled when he has been given his opportunities. Matt Hobbs told me last week that if there is one pitcher they have to get going, it’s him.

I have really been shocked that Tole has not done better than he has.I did notice that the first time I saw him pitch he was throwing 86-87 seems like and I remember last year there were some 92’s. We really need to get him back to last year’s form
Griffin is just a wild as Ace of spades looks like he just wears back and throws it. He is going to have to learn control that delivery.

Phil Elson talked about Bohrofen taking batting practice yesterday. It seemed like he said he took BP at Missouri, too, but I might have misunderstood. I’ll check. I’m about to hop on for 30 minutes with Phil on his mid-day show. Phil said Bohrofen was hitting rockets to all fields yesterday in BP and he has to be close to playing and that might happen today.

He would be an absolute huge addition to this lineup if he can hit the ball the way he supposedly can. Fingers crossed

Phil said he didn’t see him on the field in BP for the Missouri trip. But he was front and center for two rounds of BP on Tuesday and was impressive. He said Dave Van Horn said he might be available for the Mississippi State series.

Every time I see his name I think of Motrin.

What’s his status for this weekend?

He is on the roster. I wrote about it yesterday. 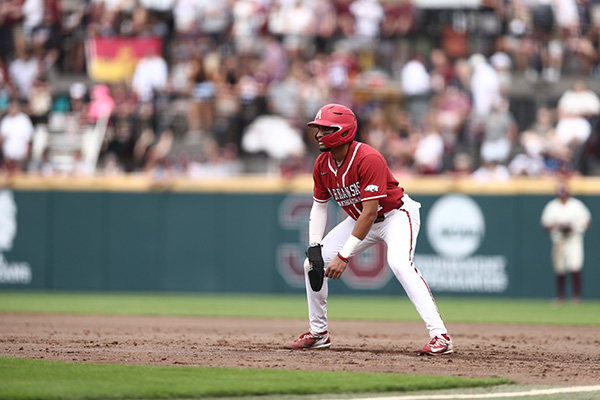 A sweep in the Arkansas-Mississippi State series has been a good predictor of late-season success.

Thanks. Must’ve missed the article.

I got a feeling he’ll be in the lineup tonight
Said he was swinging the bat well in practice. Put him out there and see if he can provide a spark

We should know in about an hour.