Wernes has spent the past couple of years coaching minor league baseball for the Phillies. He replaces Taylor Smart, who was the volunteer coach at Arkansas the past two seasons. 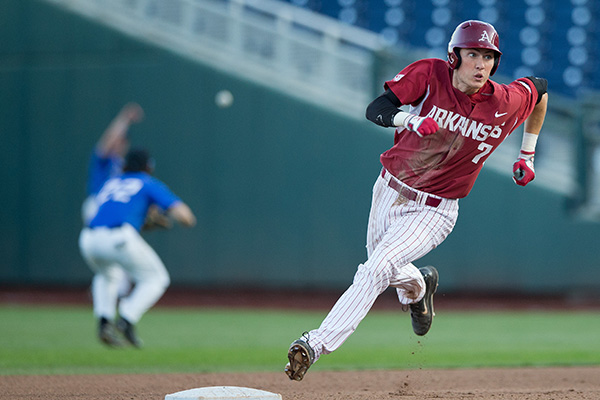 I should probably know this, but is this position paid?

Minimal; there is no insurance. Volunteer coaches get income from camps, etc.

Volunteer coaches were hit hard this year when summer camps were canceled. Each program is different, but the major programs give most of their camp proceeds to the volunteers. They can also make some money by coaching private lessons. I know some people whose kids have taken lessons that way in Fayetteville.

Thanks for the info. Any idea where T Smart is going?

I think he took a position coaching a summer league team. I was told he left a short time after the season came to an end.

Hmmm. This has me thinking. What all can a “volunteer” coach do? I’ve seen them at games, but can they also coach at practices? Can they recruit?

A volunteer coach essentially does everything an assistant coach does, with the exception of recruit off campus.

Volunteer coaches are essential to baseball teams because of the discrepancy between the roster sizes and number of full-time coaches. During the regular season there are 11.7 players for every one full-time coach. It is a higher ratio during the fall season when the rosters typically include between 40 and 50 players.

Could we give DVH a $100k raise per year, and let him hire a volunteer coach who got paid personally by him a rate of $100k per year for also mowing his grass?

That’s a little sarcastic, I know. But who determines the going rate for any instruction he’d give to local kids?

Dave Van Horn has said in the past he would sacrifice some of his annual salary if it would help fund a third assistant. That would be a non-starter, I think, for most head coaches. There are D1 baseball head coaches who make less than $100,000, some significantly less.

The volunteers are compensated for their work at the summer camps that are held on campus. Head coaches register the camps as an LLC, then hire the volunteer assistants to work the camps.