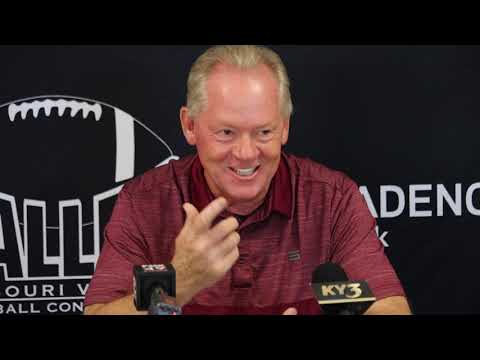 Very solid press conference, definitely looks like he has become a lot more personable. Very complimentary of Arkansas. They will not be intimidated because of the success they had against Oklahoma State last year only losing 23-16. We need to stay focused and get the job done, do not take this team lightly because you know BP is going to have them playing with an all-time high intensity.

that pic is pretty funny, he looks like PennyWise in that still shot. “we all float down here, Bobby!”

they did play Ok State to 7 point game. Just another tough stop on our schedule even if they are FCS… Should not hurt our SOS like a UCA or UAPB would have.

I’m impressed that they are #5 in FCS. I wonder how big the gap is between them and the Dakota and Montana schools?

He has mellowed since his time at Arkansas but he still has a sharp football mind. His team will be ready to go and so will Sam’s.

And former Jordan Jones will be back for this game after having concussion, so I think he’ll have something to prove to coming back for the first time since living Arkansas.

interesting, I did not know JJOnes went there. that guy can fly, will be interesting to see who covers him. and you know BP will have a very competitive passing game.

Yeah I’m pretty sure we’ll see him on some crossing routes or some long balls. Never could do nothing for us here so we will see how he does

Both will do there best against us.

Yeah we have to be prepared for every trick play in the book because they have absolutely nothing to lose. We will have to be on our toes the entire time.

Went to Cincinnati first, then transferred to Missouri st.

Man that is a name from the past. Can’t believe he still has eligibility remaining.

Very impressed with BP’s demeanor and he seemed relaxed, engaging even. The man knows football and has coached at a high level, we better be focused because he will have them pumped after their play last year against a good Okie State team and then getting some revenge against a foe that beat them last year.

I absolutely loved his analytics during his weekly show and on the Hill. Great offensive mind. I gave him a mulligan.

Our defense has been getting away w WIDE open receivers on deep passes, you know CBP will test that multiple times.

Casey Dick spoke at the Hawgs Illustrated Sports Club meeting today and he said Petrino placed a lot of emphasis on the first drive of a game because it can set a tone. He also put a lot of though into the first three plays. I’d be on the lookout for some imaginative things on Missouri State’s opening drive that maybe get the Razorbacks on their heels in a sense.

BP is 61 and Sam is 60. Was thinking after reading the articles on BP today, IF the incident had not happened and IF he had stayed those ten years, where would the win/ loss record have been? Clearly he has changed with age ,but he can still coach. With portal his recruiting would have been better in my opinion . My guess is we would have won 8, games a year or 80 more during the period.