Bobby Petrino at the LRTD club

I heard BP at the LRTD today. I had no idea what to expect either from him or the crowd (it was SRO). Came away very pleasantly surprised. My opinion of BP went up a whole lot.

Today was his first time back in the state since he left. He opened with what sounded like a very heartfelt apology to everyone there for what he’d done. He talked about how supportive & good the fans were to him, his family & Razorback teams. He actually choked up a bit as he apologized & spoke so glowingly of the fans. He got a standing “O” following that apology.

He also assured us the Razorbacks would be very good in time. Said it’s a top program with great potential–primarily because of the fan support.

Of course, he talked about his highlights here. They never lost at WMS while he was here. Spoke highly of so many of the players he coached here: Mallett, Tyler Wilson, Casey Dick, the outstanding receivers: J Wright, Adams, Hamilton, DJ Williams. (Who am I leaving off? He didn’t leave anyone out.)

He was funny, too. When asked about putting lots of pressure on his QB’s, he joked that he always thought he was considered a “players’ coach.” The presentation included some highlight plays, including the pass from Dick to London Crawford to beat LSU & the 4th & 6 where we scored a TD against LSU on a pass from Mallett to Adams. Bazzel commented that Mallett was pointing at someone on the sideline & asked BP if it were him. Petrino quipped that when Mallett pointed at him he always used a different finger.

I think the feed is available if anyone wants to watch. I’d encourage it. Like I said, my opinion of him went way up after the talk.

So does this mean we can stop pretending that we were ashamed and embarrassed that BP was our head coach?

Time heals all wounds. We had some good times while he was here, he made a big mistake, and he paid for it.

We can argue from now until doomsday about whether he would have sustained the success he had here or gone on to bigger things, but that really does not matter at this point. It’s enough just to say it’s nice he came back to talk about the good times and offer his view on the current situation.

ALL the former HCs have come back to speak to the LRTD club, with the exception of the guy that got canned a couple of years ago. And BB will be back one day, too. I think it’s a good thing to have those guys back after a few years pass.

I am certainly not ashamed and embarrassed he was our coach. We didn’t hire a preacher…we hired a football coach when we hired Bobby. He screwed up and was fired, but when he was here he was loved by the fans. He was one heckuva football coach, and he did his job well. He messed up the best job he ever had, and he apologized today in front of the Little Rock Touchdown Club. Watch the interview with David Bazzel.

So does this mean we can stop pretending that we were ashamed and embarrassed that BP was our head coach?

I was never ashamed or embarrassed he was our coach. I did agree that Long made the right decision under the circumstances. I still think Long made the right decision. However, I recognize contrition when I see it & he exhibited that today. One thing he did to demonstrate that was that he came to LR without charging the club anything. Most speakers are expensive. The fact that he’d come gratis speaks very well of him. Like I said, my opinion of him has gone way up.

Two reasons I really like Bobby: 1) unlike perhaps our current coach (jury is still out), you knew you’d never get outcoached, personnel and X and O wise, on game day; and 2) he proved that winning in the SEC at a high level, even beyond what Nutt did, is possible at Arkansas. In fact, #2 is why I get so frustrated at a guy like Bielema. Due to laziness and other reasons, he just let it slip through his fingers, now leaving Chad Morris a mess that I’m not sure he can clean up. Bielema really did a number on us.

I am on record for wanting to have kept Bobby, but I’m not going to go there any more. We are way beyond I that. I do appreciate his contrition and showing up in Little Rock today, without a speaking fee, to apologize.

Bobby’s apology is at about the 6:30 mark in the clip.

I wrotesome of what he said. The program was fascinating and I probably did a poor job of capturing what he said, but I’ll post it soon. Also, he declined to take any pay. His offenses were always fun to watch. They did give up some plays on defense, but he was good at what he did and that was prepare quarterbacks. I have always been curious to what he would have done with Tyler Wilson as a senior.

cudos to the touchdown club. that was handled with class by both bazzel and petrino. the one interesting story was the one play they practiced all year against the LSU defense. it worked.

made me wonder however, if the coaches we have on campus now are that knowledgeable. impressive to listen to the offensive mind of petrino, and it was only just a tad of information.

I wrote a commentary about his talk. It was fascinating.

Not cool to brag on your own commentary.

I am on record for wanting to have kept Bobby

Me too. A coach who could coach. Go figure.

The talk was fascinating. My story was just what he said. Not much commentary from me and it was just an old typist turning out copy. I will correct my original post because you are correct.

Just as a reminder, they explained after the game they had practiced it the previous spring with that game in mind.

No doubt he could call plays, but his recruiting had a lot to be desired. We were hearing that at the time. UL had the same problem. I already said my opinion of him went up after today’s meeting, but let’s not try to act like we were always going to be great had he stayed. Certainly we’d have been better than we were the following 2 years, but I expect by 2014 you & a whole lot of other people would have been calling for his replacement.

Here is a link to the story I wrote after watching Bobby Petrino and David Bazzel today: 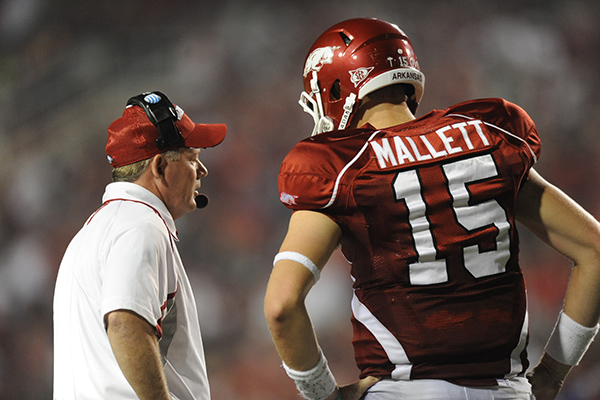 State of the Hogs: Quarterbacks and Petrino

Bobby Petrino returned to Arkansas on Monday with an apology, and memories of coaching quarterbacks.

I give David Bazzel a lot of credit for pulling this off. Obviously, Petrino’s relationship with Frank Fletcher was the key component, but Bobby had to trust that David was going to handle it exactly this way.

I talked with David at the game Saturday night and both of us were pretty sure that the crowd was going to treat Bobby exactly the way they did.

Clearly, there was great empathy for him after his apology. But, they were good to him when he came on stage and also when he came to the microphone. I’m sure that helped him move through the program in the way he did.

Bobby always prefers Q&A over just making a speech. That’s the format he used for Razorback Club and it was very similar to what happened today.

I loved the way David sprinkled in the video clips in the program that gave you a great feel for the plays and allowed Bobby to do what he does best, explain the calls and how he set them up.

I had forgotten that Mallett had to reach well above his head for the first snap in the game against Alabama. I’m trying to recall who that was snapping the ball. Maybe it was Travis Swanson snapping.

Bobby Petrino was a great coach while he was the Razorback coach. The success he had during his tenure happened during the best run of SEC teams ever. He was an offensive genius that knew all the x’s and o’s . His teams were disciplined and were always well prepared. They were “must see” football games.

Regardless if you thought he should have been fired, no one can question his coaching genius. There are haters that said he could not recruit and that his teams would fail because he was not a good recruiter. Maybe, maybe not. When he was fired, he still had a lot of talented players on his team. He was successful and was winning. That makes recruiting much easier.

I hope that Morris can eventually have great success, Right now, he still has a long way to go.

I will remember the Petrino era like I did the tenures of Holtz and Broyles. All had great success and it was truly fun to go to Razorback games. Holtz and Petrino were hard ass coaches who demanded perfection. Broyles was the ultimate CEO coach who probably had more great assistant coaches than any other coach. And Broyles won it all in 1964.

Petrino told the Touchdown Club that the Razorbacks need strong support from all the fans. Petrino said the Hogs can and will be back if Morris and his team get the same support that he and his teams always had. Morris needs our support. He was left with a divided team that was and is short on SEC talent. I intend to support the team, but I will be realistic and will still comment about the team, good and bad. WPS and GHG.

ricemab54,Did you say best run of SEC teams ever? You should apologize to guys like Matt Jones, DMAC, Stoerner, etc. They played against teams like Tennessee, UF, and UG when they were powers.

All three of those programs were down when BP was here.

BP doesn’t deserve to be compared with one iota with JFB. JFB was loyal, a program builder and sustainer. BP was just the opposite.

Clay, was he apologizing for the motorcycle crash or for the way he treated everyone the whole time he was here?

He did not say and David did not ask. That’s up to you to decide. I expect you knew that and just wanted another little dig at him.

It would be my guess that it was just a blanket apology for anything you deemed he caused.