Bluegrass Bourbon for the EOEK

The History of the two states demands a more refined glass

so in this case I recommend Blanton’s Single Barrel Bourbon

"Taken from the center-cut or middle sections of the famous Warehouse H, Blanton’s Original Single Barrel was once designated for ambassadors, dignitaries, and Colonel Blanton’s family and friends.

The taste profile is sweet, with notes of citrus and oak. The creamy vanilla nose is teased with caramel and butterscotch, all underscored by familiar baking spices such as clove, nutmeg, or cinnamon. Blanton’s Original set the standard for single barrel bourbons in 1984.

Best served neat or on the rocks."

I highly agree with this review and recommend it as we watch our Razorbacks continue to out knife fight, Shoot and wrestle our mountain Kin and win the victory 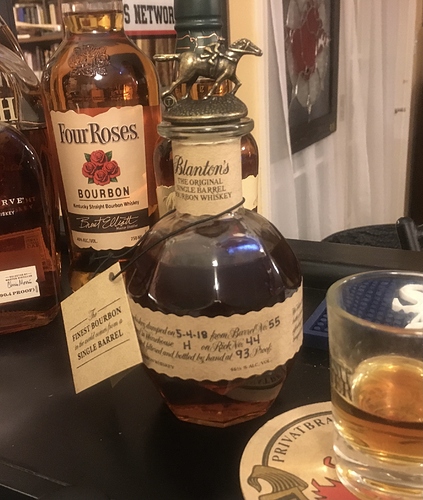 I couldn’t agree more. I was just introduced to Blanton’s and it has become my favorite in short order.

always hard to go wrong with anything from Buffalo Trace Distillery. Blanton’s is one of my favorite. GO HOGS!!

For the money it’s probably the best deal

Yes bow a toast and sip beat to a Razorback Victory

Blanton’s is about my favorite “Affordable” bottle of bourbon. I have held a number of parties where I do blind tastings and have everyone rate the bourbons in order of preference. I will have six for tastings. Blanton’s always rates at or near the top. The other that always is at or near the top is Wild Turkey 81 proof.

I guess I’ll have to try some Blanton’s.

A fine choice for a beautiful fall day and a Razorback victory!
Completely agree on the Blanton’s. It’s always been hard to get in Arkansas, but it is extremely difficult to find these days. Allocations are way down this year, and more and more people are discovering it. Behind Pappy, Blanton’s is the bourbon we get the most requests for. It’s very unlikely, but if you happen to see Blantons on the shelf somewhere at anything close to MSRP (approx $70-80), buy it immediately–you will not regret it.

Blanton is amazing. Definitely my fave. It’s really hard to find. I think it was Slives bourbon of choice.