Just presented for information and discussion 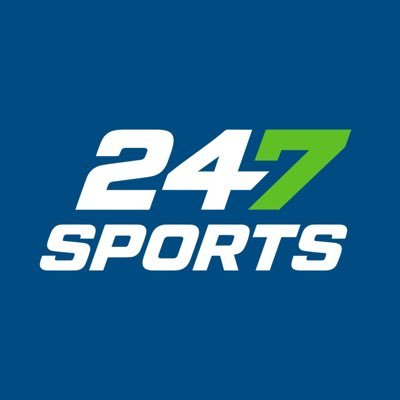 @247Sports
Blue-Chip Ratio 2022: The 15 teams who can ACTUALLY win a national title. @BudElliott3 breaks it down in his yearly study. 247sports.com/LongFormArticl… https://t.co/y66dzZTBb6 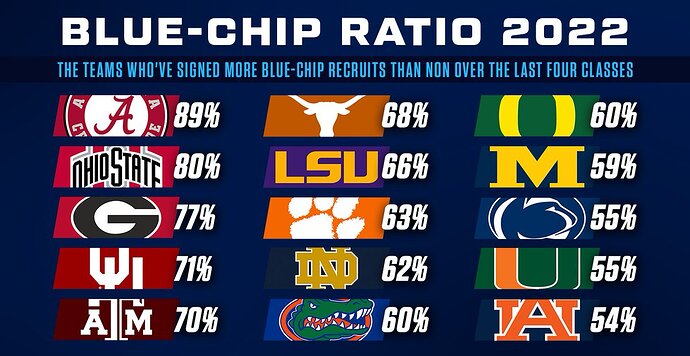 We just dogslapped PSU and they lost 22 lettermen from that 7-6 team. They’re picked fourth in the B1G East.

They were evidently short quite a few players, the announcers put a disclaimer on a lot of our good gains with that lil tidbit of info.

I will say they were recruiting pretty well. 2 of those 6 years they were 50-50. However, their 1st one year (not 4 straight years) of qualifying, they barely made the list (10-9) for blue chip recruits. Clemson actually had to win those 2 National championships before they started to qualify for his necessary 4 past consecutive years of more blue chips than non-blue chips.

I’d say the author needs to work a little on what’s needed to qualify for his “2022 list of teams who can actually win a National Title” (his words). Clemson actually did it twice in the last 6 years.

Just reminds me of what I have said for years “Stars matter, but they aren’t everything.”

Perhaps there is an accelaraed spoilage variable at work in the blue chip bin not always caught before it undercuts the physical talent. Our ranking authorities don’t alway correctly identify character flaws tending to see only the physical aspect of these talented young men. I recall those times before low graduate rates reduced scholarships when HDN knowingly oversigned taking many academically marginal recruits near, if not blue chip status from a football talent perspective.

On target and consistent with my thoughts for decades now. You’ve articulated it very well, IMO.

The other thing is that the “X factor” is the drive to succeed and confidence within the personality of the individual kid. No metrics or drill will accurately display this, but good recruiters have a way of “sniffing” it out.

Said another way, you give me a high 3 star with leadership skills and a high motor, and I’ll take him 7 days a week over a fawned after, “like seeking”, NIL chasing 5 star. Not saying the players should not be able to share in the revenue their efforts generate…just saying it shouldn’t be their primary motivation for picking a school, and that having that sort of attitude WILL affect their performance on the field in most cases.

Vey true and well put. Several of our 3 star recruits have a 5.7 ranking on Rival’s rating system. While the 4 star players are 5.8 , mostly. Not any difference to me, really. I look at the offers and all of our recruits have nice offer list’s with very few exceptions.

I’m of the opinion that recruiting class results have to taken with a little bit of salt. I love that Muss recruited a top 3 or 4 class but… I think rating classes a couple of years in gives a fair better idea of how you stacked up. For all his BS Morris’ recruiting did leave CSP a bit of talent to work with.

My evaluation of recruits is almost exclusively by offer list. Somehow, I trust SEC coaches to do a better job of evaluating recruits than some guy who thinks they know something

By the way, looking at that chart again, I notice that we went 4-3 vs. that group of 15 teams last season. A couple of thoughts…

First, if anyone doubted the difficulty of our schedule (and finally, some people are starting to acknowledge that annual truth), that should confirm it. I didn’t review every team’s schedule, of course, but I doubt anyone played as many from that list as Arkansas did.

Second…if we can go 4-3 against them, that means our overall talent CAN’T be too far off what theirs is…regardless of how you determine what “talent” is. For a given game? Sure…David CAN beat Goliath every once in a while. But when you play 7 “Goliath’s”, you’re not gonna win 4 times unless your weapons are pretty much a match for theirs.

Not saying we can’t improve (and I’m feeling very good about that with our recruiting progress this year)…but I am saying that we’re not doing it with mirrors.

In addition to what has already been said, I submit that each year were I to recruit the top 25 5* players on the board in a single position, I probably would not beat your diverse group of 3*, each of whom filled your need at each position. As has been stated earlier, there is much more to it than your number of stars on your team.

Here’s the explanation of the chart by Josh Pate. I get what he’s saying, but hope to prove him wrong. Josh does give Arkansas plenty of praise. 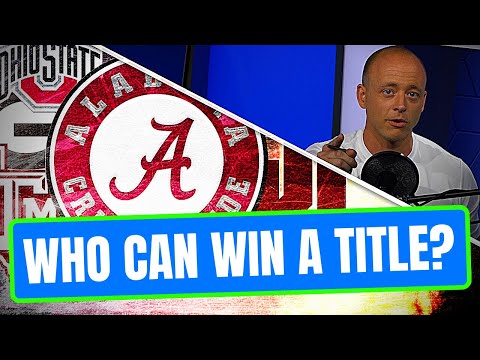 Here’s the explanation of the chart by Josh Pate.

I guess I just don’t understand debating the two leading theories on talent migration; I think both are in play.