Blake Kern caught a 47-yard pass from his old teammate Cole Kelley tonight in the Rose Bowl. I called Blake after the game and got his thoughts on the play and his experience in Pasadena. 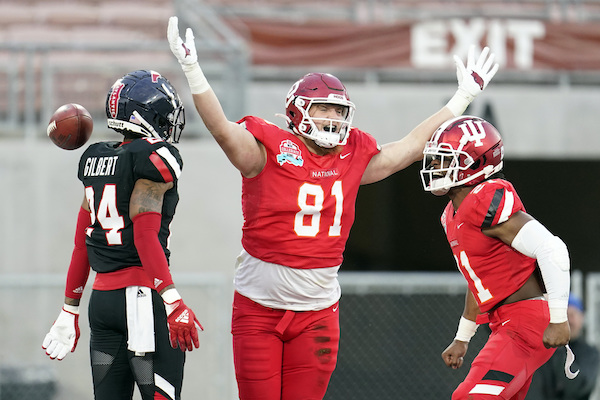 Former Arkansas teammates Cole Kelley and Blake Kern connected for a 47-yard touchdown at the Rose Bowl on Saturday night.

Man, has he gained a few pounds?

Why did he have a Razorback on one side of his helmet and OU on the other?

In those all-star games where players bring their own helmet, mixing and matching helmet stickers is a long-time tradition. Decades, even.

In addition to the OU decal, he also had an Appalachian State decal on the back of his helmet from Corey Sutton, who he roomed with during the week.

The OU decal came from Mike Woods, and Kern gave Woods one of his Razorback decals. He said he thought it was right for Woods to have a Razorback on his helmet since he played most of his college career at Arkansas.

And possibly to remind him he could have put up better numbers at Arkansas?

Agree, looked like it. With his success as a blocker for the Razorbacks, wouldn’t be surprised if his future in the NFL is as an OL.

Kern weighed 264 pounds at the beginning of the week of NFLPA workouts. He was listed at 265 for the Razorbacks in 2021.

Then, might not be able to gain 30 or 40 ponds needed to play OL. Already has a bit of a jiggle around the waist line.

Good player for the Razorbacks, did a lot for our running game. Just doesn’t look like most of the TEs in the league. And not meant as criticism, but just an opinion.