Bill Self considering lawsuit against NCAA 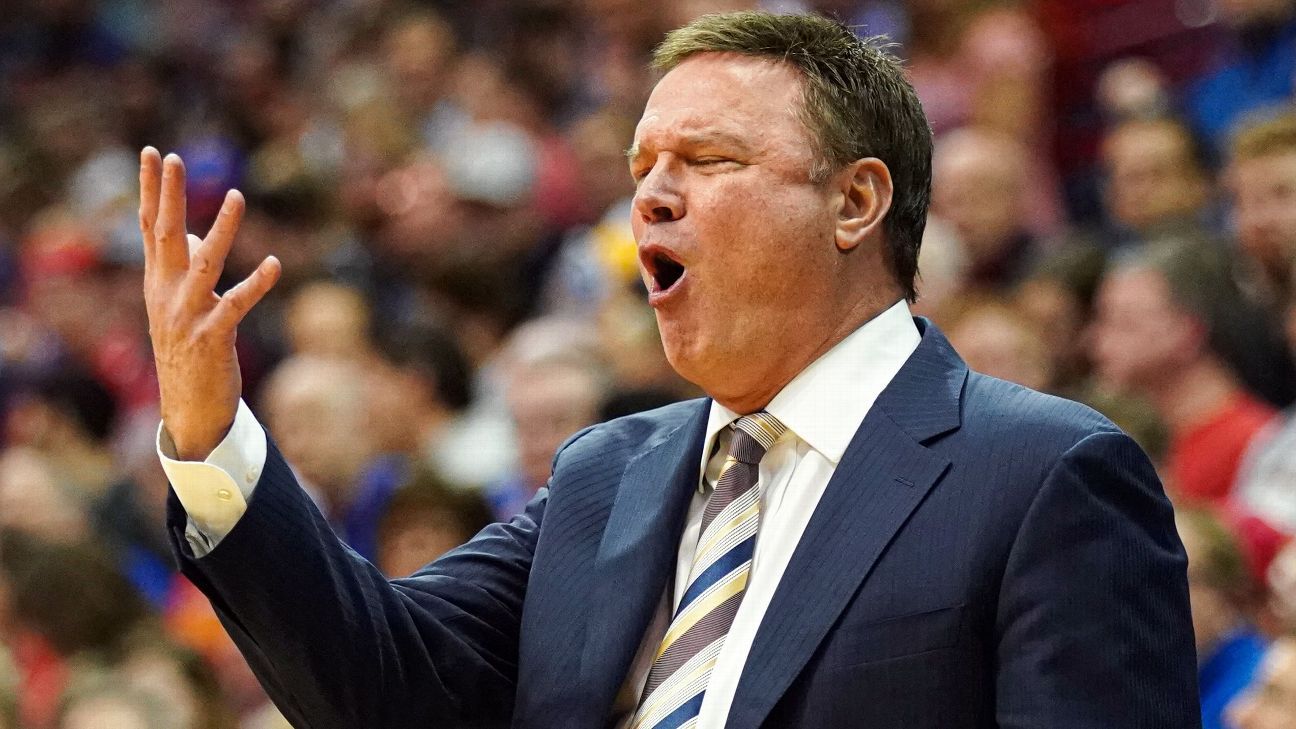 Bill Self is considering legal action against the NCAA as a result of its investigation into his program, his attorney informed college sports' governing body last week.

The KU case has been referred to the NCAA’s Independent Resolution Panel, which is a new way of resolving NCAA violations cases with no right of appeal.

The last paragraph of the lawyer’s statement says a lot. And I feel it will only get worse.

Yep, you’re right. If Billy S. is going down, he’s going to take others with him.

I am sure I am stating the obvious, but I now realize it comes down to if the shoe companies giving money to recruits, to get them to go to a certain school, is a violation. At first blush, it is “of course it is a violation.” But remember the T Martin case? (Going from memory here). Facts show lady gave T Martin a lot of money. BUT, because she wasn’t “officially” a “booster” of UT, not a violation.

What a loop hole! All you got to do is find someone who didn’t go to UA, hasn’t given money to UA, etc (just look at the rules as to who is a “booster”) and funnel money through that person and buy yourself some players! The rule OUGHT to be if money is given to a player (or their family) for the purpose of getting them to go to a certain school, it should be a violation. I understand some of the problems with such a rule, but the loop hole is just SO BIG otherwise.

If the shoe companies aren’t in fact “booster” under the NCAA Rules, hard to prove a violation. I would ASSUME (don’t know) if you could prove that a coach organized the payments from the shoe company (i.e. a “strong ass offer” it would still be a violation, But if they aren’t “boosters” then if a shoe company wanted to offer a player, openly, money to go to a certain school, they could??? I think that is the case based on T Martin.

His career is a joke! He knows he’s guilty and wants to threaten the NCAA. Maybe he ends up in the soup line!

Just think, We almost had Self as a Coach after Nolan. Lots of people pissed it didn’t happen then.
Would he have gotten UofA into a mess like this?

Maybe but we would have won a lot of games along the way. No Heath, Pel or even MA. Would he have cheated here? Probably, but we will never know.

The NCAA has backed down many times before. Remember when Johnny Manziel flagrantly took money for signing autographs and his family had enough money to threaten the NCAA in court and win, so they totally dropped it? If Self threatens to bring down Kentucky, Duke, UCLA, etc. and expose the NCAA for what it is, I think they tank on this one as well.

The NCAA definition of a booster (or in NCAAese, a representative of athletics interests) includes someone who has given the school financial contributions. Clearly under that definition Adidas fits; they have given millions of dollars to KU, just as Nike has given us millions. That’s why the NCAA is pursuing these cases in the FBI investigation; the Fibbies proved that Adidas gave money to a lot of players.

Jhawg, I think the cheating did get too egregious, and the NCAA realized that with the FBI handing them these cases on a silver platter, if they let Kansas and Louisville and Arizona skate, they’ll lose what little credibility they still have.

My question is why do these shoe companies direct players towards certain coaches or schools at the exclusion of others. Do these coaches have some type of financial arrangement with the shoe manufacturers.

Do these coaches have some type of financial arrangement with the shoe manufacturers.

Kansas is an Adidas school. So is Louisville. I would guess that they probably pay KU and UL more than they pay some other schools, just as Nike has schools that they pay more (UNC, Kentucky, Bama and Oregon come to mind). The point of these deals with the schools is to get the Adidas/Nike/Under Armour brand out there; the more those schools are featured on TV and other media, the more exposure the shoe company gets. So it is in Adidas’ interest to help direct stud hoopsters to Kansas and Louisville so that their three-stripe logo is seen in the Elite Eight and the Final Four.

So the implication is that it is more about the perceived status of the school than the coach. Bill Self would not get the elite recruits if he was at say TCU for example.

Bill Self would not get the elite recruits if he was at say TCU for example.

Self is a very good coach. He would win wherever he went (in part because he knows how to play the shoe bagman game), and if he were at TCU, TCU would probably get a better shoe deal than it would have otherwise gotten (although Gary Patterson’s success in football has likely gotten the Frogs a better Nike deal than they would otherwise get as well).

While I think Will Wade is safe, I believe Self is on the ropes and trying to play rope-a-dope with the lawsuit. I expect at least a year of post season ban.

I expect at least a year of post season ban.

Okie Lite got one year ban for one Level I violation and its HC wasn’t named. KU has five Level I’s and Self is named. I think KU gets at least two years and Self gets a show cause. And I think Self knows it and that’s why he’s considering this lawsuit.

I think the NCAA is still working on LSU’s case, and Arizona’s, and it’s too soon to predict that Wade or Sean Miller will skate. Certainly the SAO on the wiretap suggests that Wade will be specifically named when they get around to a notice of allegations, and they probably will name Miller as well.

I agree with you on Self. That is why I said at least one year.

I think they have some direct evidence against Miller, so I agree with your assessment of that.

I think KU gets at least two years and Self gets a show cause.

And it couldn’t happen to a better guy. (Can you tell that I’m still upset about what he did to ORU and more so to Tulsa? I’m not sure if he screwed Illinois as he did those two, but it wouldn’t surprise me.)
BTW, Tubby Smith showed all how to leave a school. When he left Tulsa, he didn’t comment. He did offer to pay his son’s tuition, but then he took the job at UGA. Self, OTOH, claimed he was going nowhere and then skedaddled, leaving at least two schools and probably more than one athlete in the lurch.

I’m convinced that if BIlly had taken our job when he supposedly had the chance, he would have skedaddled as soon as a better offer came along. Like Kansas, for instance.

I’m convinced that if BIlly had taken our job when he supposedly had the chance, he would have skedaddled as soon as a better offer came along.