The Rebels’ star first baseman Tim Elko was injured tonight. He had to be helped off the field and was seen on crutches with a knee brace. Mike Bianco said he will have an MRI on his knee tomorrow.

Elko is probably Ole Miss’ top hitter. He is second on the team with a .340 batting average and leads the Rebels with 9 home runs, 7 doubles and 36 RBI. 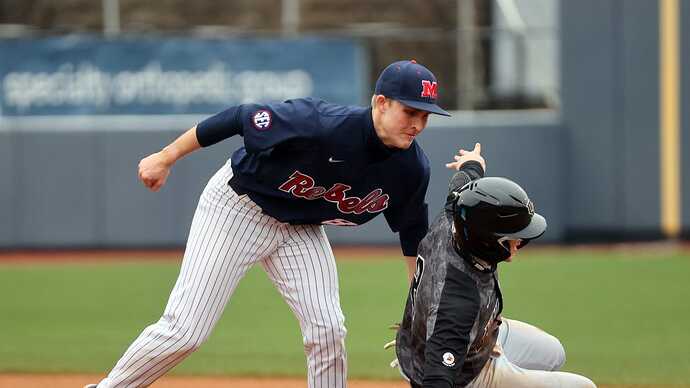 No. 3 Ole Miss baseball routed North Alabama 20-6 on Monday but received some bad news when star 1B Tim Elko left the game with a knee injury.

Bad news! I hate to see players get hurt! This will benefit the hogs if he is unable to play.

I hate that, too. Just hope and pray that doesn’t happen to our players.

Amen! Keeping our hogs healthy and able to compete will be huge for the hogs to have a successful season.

Let’s be honest here. The Hogs’ real season starts June 4. Everything before that just sets up for the postseason, but the real season begins in June. And with 10 wins in June we can get the big trophy.

Elko is A great hitter and would be a huge loss!

Never want to see a player hurt, especially as bad as this seems to be; however, it is ole miss. Hope he recovers quickly (yes, even by Fri.) and any potential MLB shot is still there for him.

Thanks Matt, it is a big development…

NCBWA named Elko its hitter of the month for March. From the NCBWA release:

In 17 games, Elko went 28-for-66 (.424) with 23 runs scored, seven doubles, nine home runs and 33 RBI. The senior out of Lutz, Florida, slugged .939 and added a .519 on-base percentage for an OPS of 1.458.
While making 10 starts at third base and seven at first base, Elko notched nine multi-hit games, including two four-hit games. He also drove in multiple runs nine times, including four games with four or more RBI.

Now that’s impressive hitting. Obviously it didn’t matter who they were playing. He performed consistently. Hate to see a guy with that kind of talent get seriously hurt. Even if he does play for Ole Miss.

Elko tore his ACL, according to the Clarion Ledger.

Huge loss. They have a lot of talent, and will plug someone in the lineup that is probably pretty good, but whomever it is will certainly not have the production of Elko.

You just don’t see many torn ACLs in baseball.

It was just a freak play. He took a weird turn at first base and went down.

He’s a great player, heard he may wait on surgery and see if swelling subsides and try to play if possible, very unlikely probably but have heard that is what he’s thinking

OM has very good pitching and a flare for late inning magic like we do,very similar team but will really miss Elko power