Where you were 36 years ago today (us old folks anyway). I was attending the Arkansas - North Carolina game in my hometown Pine Bluff. Charles Balentine dropped the shot in to put us ahead with 4 seconds left. Carolina got off a last shot that was all iron and we win. I’ll never forget charging the court and celebrating for a long time.

Several years ago I spent a good deal of time with Brad Daugherty and we talked about that game. He said that Alvin Robertson and Joe Kline were great players. But he always said ‘you guys were lucky”.

I was watching the game but can’t tell you where. Probably at home.

I can remember where I was when US hit the half court shot vs. Louisville.

That was an awesome game! Beating NC was nice but anytime our hogs beat Texas was equally special. Our hugs will get back to winning it just takes time!
My family gathered up at my grandparents for dinner and watched the game together. Hogs game were like a celebration in my household growing up!

I was sitting in the first row right by the hoop on the side of North Carolina bench. Still remember holding my breath as Steve Hale took that last shot and I saw that ball miss the basket from about 10 feet away. What a game! Unforgettable. Still have the game brochure.

I was covering the game for UPI. For some reason UNC brought a miniband which was stationed right behind me, so the UNC fight song was burned into my brain for two hours.

Also the floor was so narrow that there wasn’t room to stand out of bounds for an inbounds play. UNC’s final inbounds pass was right in front of me and I remember the ref telling the player to “stand here (on the court) and don’t move.” A few seconds later Hale missed and pandemonium ensued.

I was on the bench as manager.

I still take credit for the win because of throwing Charles a million passes after we first met in the fourth grade at Newport.

By the way, I was both taller and scored more points than Charles on our fourth grade basketball team that for some reason was named Camel with a Hump in the back.

It turned out to a be a fantastic Sunday for me. It was also the day I met a young lady named Laura Beth Horne, who would become my wife and the mother of our kids Lindsey (now 32) and Brooks (now 28).

Yes, that was a very good day.

I was there staffing for the Tulsa Daily World. The highlight of that trip was the day before (a Saturday). Because Bill Connors (my boss at the TDW) knew Jerry Hale (dad of UNC guard Steve Hale), we got an invitation from Dean Smith to watch the UNC practice at Little Rock Central. That’s my high school. So we got in the gym and watched as nine McDonald’s All-Americas went through their drills. Yes, Michael Jordan was impressive, but the blur on the court was Kenny Smith, then a freshman. He was the quickest player I’d ever seen.

Game was fun, but there were some moments as we got to the arena about two hours before the tip that it seemed like it wasn’t going to happen. The Arkansas basketball team was in tough weather between Dallas and Pine Bluff and there was a thought that they might be diverted to a different airport. Too much turbulence in the air in southwest Arkansas. There were some tornadoes possible. I do know that several Arkansas players threw up on the plane ride in. 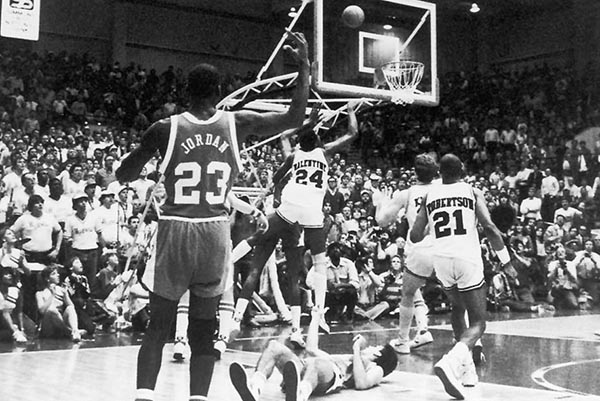 Charles Balentine made one of the Razorbacks' most famous plays 30 years ago today.

Clay, did Kenny Smith practice before the game? Because he didn’t play that game as he was hurt.

Dudley, I have that game on DVD. I am going to watch thru it tonight to see if they had a shot of the bench during the telecast and see if I can spot a young Dudley. Were you wearing a hat or anything which may make spotting you harder?

No, actually had a suit on and no hat.

If you watch close enough at the end, I get the basketball on two bounces once Steve Hale misses the last shot.

Please tell me you weren’t wearing a Leisure Suit…

You made my job easier to look for you. Thanks.

Pine Bluff is my Hometown as well, but I wasn’t there. My son was, and he still talks about running onto the court with his friend after the victory. He said they didn’t know what to do (he was 13) so they just kept running around…

It’s fun to go back and watch yourself on the bench when you were young and skinny, right Dudley? And in my case, a bit depressing.

I am not aware of what a leisure suit is.

I am not aware of what a leisure suit is.