Along with nine other Royals, because none of them got the jab. Yes, that’s still a thing in Canada. 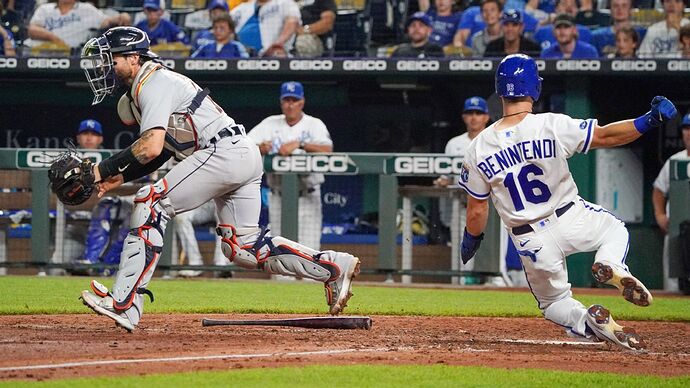 Royals without 10 unvaccinated players at Toronto

Ten Royals players, including four of their top hitters and two of their best starting pitchers this season, will not travel to Toronto for this week's four-game series because they have not received the COVID-19 vaccination.

Royals will have to call up a bunch of minor leaguers, including some NWA Naturals, for the Toronto series which starts tomorrow.

A friend in Little Rock got covid last month. She was vaccinated plus one booster. So it’s still possible to get it.

Interesting that the Royals seem to be the first team this year which had a large number of unvaccinated guys not get on the plane for a series @ Blue Jays. I think there have been a few other unvaccinated players on other teams, but it looks like the Royals will dominate the Kyrie Irving All-Star selections this year.

Oh you can still get it! I had it 2 weeks ago and I have the vax and the booster. It is my opinion that because I did have the shots I had a mild case (really only effected me for 2 days, a few symptoms 2 more days, no where close to needing to go to the doctor, much less the hospital). Of course I don’t know that for sure.

I don’t regret getting either shot.

Parenthetically, I saw yesterday that because of the latest Omicron subvariant, they are strongly urging yet another booster for those over age 50, if your previous booster was more than four months ago.

Yep, saw that too. I am well over 50 (and have other health issues) so I will be getting it. Will it do me any good? I don’t know. It won’t hurt me!

Totally unrelated, but, I have never gotten a flu shot. I didn’t have a problem with getting one, just never seemed to get around to it. But I do plan on getting one this year. I also (since I am 59) going to get the shingles shot.

also (since I am 59) going to get the shingles shot.

Depending on your medical condition and other risk factors, you might get the pneumonia vaccine too. I think the CDC recommends over 65.

Depending on your medical condition and other risk factors, you might get the pneumonia vaccine too. I think the CDC recommends over 65.

My son-in-law’s grandfather had all of the shots and boosters and got covid. He went to the hospital for Covid, it turned into pneumonia, and he died in the hospital. There is still a need to be careful especially for the folks who are vunerable.

I am into my fifth week of Covid symptoms. I have the BA5. This variant is supposedly 3 to 5 times more contagious and gets through both natural immunity and vaccinations. The cases with this variant are lasting longer on average but fewer hospitalizations and sever cases which some of that may be from both vaccinations and natural immunity. Brain Fog is real and at times has been debilitating. I have not been sick for more than two days since I was in JR high and only had the flu twice in my life and not since I was in college and I am 54. I only say that because I am not one to get sick and I will get the booster when the new one comes out sometime in the fall.

No Vax, finally got it about 3 weeks ago. It’s my opinion I now have the STRONGEST immunity, NATURAL immunity.

No Vax, finally got it about 3 weeks ago. It’s my opinion I now have the STRONGEST immunity, NATURAL immunity.

i would sure like to see any evidence of that, I haven’t see it. Logic says natural + vax is better than natural alone. I am not saying natural isn’t good. But don’t see why that plus vax would not be better. (I would rather have two blockers ahead of my running back than one)

BTW, my wife caught it back in December. It wasn’t a big deal at the time. Felt bad for a few days, then got better. BUT, now for the last few months her sense of taste and smell are all messed up. She can’t eat a lot of her favorite foods (she says it taste like chemicals have been poured over the food) and she smells smoke (not in any way a good way) almost all the time. She would pay a LOT to have never had it. A LOT.

My niece is a pharmacist in Little Rock. She said there’s been a huge surge of positive Covid cases since May (worse in June) in the people they tested at her pharmacy. Most of these people tested positive with a home test kit first and came to the pharmacy for confirmation.

She said they had no false positives so far - if the home test was positive, their test was also positive.

She said Moderna and Pfizer have newer formulations in the works that target both the old variants and omicron that will hopefully be available by the end of this year.

Our military is not allowing new recruits who haven’t been vaccinated, which is brilliant considering how low recruiting numbers are for all branches right now. And Russia is at war. Taiwan.

So it’s not just “up there” it’s right here.

all the more amazing considering how mild the current coxis is and how ineffective the vaccine is vs the current variant.ugh

The vaccine manufacturers are working on vaccines directed to the new variants - supposed to be out toward the end of the year. It is hard to develop a vaccine preemptively.

Hasn’t the military always required a bunch of vaccinations to sign up?

Of course they have

I round on about 14 patients daily, see 20’s more in clinic daily. I’m seeing NO significant COVID issues.

2 weekends ago I saw 70 patients in bhmc, ONE had COVID. One. And he was there with a broken back, and tested + for COVID, but was clearly not sick enough from COVID to consider hospitalizing him for it. And remember, our hospital has seen more COVID patients than any other hospital in the state. Since the beginning of this mess. I’ve seen dozens of folks die from it. I was THRILLED to get a vaccine the instant the I could. But things have changed A LOT since then.

And I’ve been going to football games with 70K people since September, I’ve been in a ton of AR high school gyms with hundreds of people, 99% with no mask.

So at what time do we say that this virus has mutated to the point that we quit talking about masks and vaccinations? If we are going to track this virus and immunize for it, then why don’t we do the same for rhinovirus or coxsackie virus? RSV and Influenza are far more dangerous now, so why don’t we booster them and track every case?

In my opinion, there’s no MEDICAL reason to do all this foolishness. Or to penalize folks based on issues from 2020-august,2021.

As someone who is about to enter my 6th week of symptoms and experiancing intense headache and brain fog today…I beg to differ.

I see 20-22 patients daily and am seeing or getting reports of positive tests every day.

As of right now, the disease is generally mild. For the most part. The mutations have made the virus more transmissible but less deadly. The virus has evolved. A virus which kills its host does not propagate itself.

But we have no guarantee a future mutation will not be more deadly.

No guarantee covers way more than virus mutations.
Aging has a way of expanding our perspective.