Benny Baseball and the Royals

… have begun to turn it around. From the Athletic:

Then, in the bottom of that half-inning, with Tigers starter Casey Mize, who had been dealing all day, on the mound, Royals left fielder Andrew Benintendi poked a ball toward center field, igniting a rally that would cut the Tigers’ lead to 2-1.

Benintendi, who has proved pivotal in the Royals’ recent stretch of six wins in nine games, is a testament to a comment made by Moore days after the 2020 season ended: “(We need) a couple of more bats, especially guys who are going to be tough outs. Professional-type hitters.” That is, in part, why the Royals acquired Benintendi. The signing has proved pivotal when the games have mattered, and so has the Royals’ bullpen and specifically Zimmer. 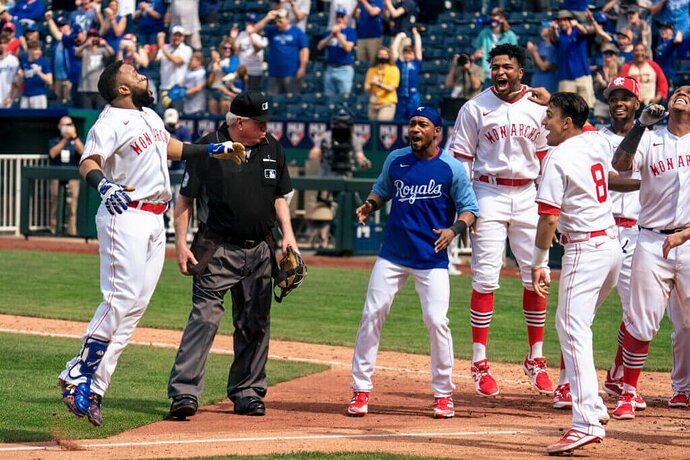 Interesting to see both Singer and Kowar mentioned prominently in the Royals mound staff, since the Hogs owned both of them as Wallets.

And IIRC, we did well off of Mize.

I think we beat Mize 3-2 or something.

Yeah Bonfield hit HR off Wise down the RF line. Big hit in the game

Final score was 2-1. Bonfield homered in the fourth, Fletch was next up and doubled, Grant Koch singled him home. Auburn had taken the lead in the top of the 4th on a homer by Edouard Julien off Blaine Knight.

Home plate umpire that night was Jeff Head. We’ve seen him very recently as I recall…

I’m not sure it’s been publicly acknowledged but Blaine Knight told me that they picked up on video where Singer was tipping his slider that season.

That would not surprise me. There’s a reason we hit him when others couldn’t.

That would not surprise me. There’s a reason we hit him when others couldn’t.

And there’s a reason why guys like Ted Williams hit .380 or whatever…actually, there are several reasons, some God-gifted, others not. But one of them is studying pitchers and picking up on things that tip what pitches they are likely to throw. No different than a corner picking up on eye contact between a QB and his WR, then jumping a route because his gut told him the play was going that way.

Playmakers do that. And good hitters are playmakers.

I am also sure that great hitters have better or different eye sight that allows them to see spin patterns that others do not.