“What are we doing for your birthday this year?”

I’m thinking if it had been my wife I would have taken her to one of the Hot Springs hospitals instead of speeding back to LR. I’m sure she had her obstetrician in LR, but sometimes you gotta do what you gotta do. Especially when it’s the third child; those can tend to come out rather quickly. I’m surprised you didn’t pop out in the car on US 70, basically.

Sainte Genevieve Missouri. This place would have bored the younger me to death. Now I can’t imagine living anywhere else.

Her doc was in LR and they wanted to get back to him. Hot springs hospitals were not an option to them. She said it took 40 minutes the way he drove.

They knew I was big so I guess they thought they had time. My Grandfather was an orthopedic surgeon in Little Rock so I think that had something to do with it. Also, those connections made the cost of my birth zero somehow.

Luckily Pahpah was there. They said I should have been a c-section but I guess I started down the normal way on the trip to LR. They wanted to break my shoulders to get me out. He told them “hell no you’re not breaking his shoulders! His arms will be short!” Then looked at my mom and said “Bonnie, what do you wanna do?” She knew what to do.

Disclaimer: I texted my mom to supplement this story.

Ok. Ten-pound kids don’t just pop right out; my son was 9+. All three of my brother’s kids were about 6 weeks premature, thus smaller, and by the third one the OB needed a catcher’s mitt because he pretty much shot out of there.

Not those of us who know the college game.

Managers generally become coaches … some of the best.

Thanks for the heads up on the doc.

I never wanted to coach. I just wanted to be a part of Hawgball. When I was in HS, I drove through a snowstorm from Rogers to Drake Field, in an 89 Mustang (not exactly a 4x4, lol), to meet the team after we made the 1990 Final Four. Four years later, I got to carry the National Championship trophy off the plane after we returned to Drake from Charlotte. Absolute time of my life!

Oh, I get what you’re sayin man. My wife went 41 weeks both times but the second one came out a lot quicker. He was purple and looked like he went 12 rounds with Ali. We were told the faster they come the more beat up they can get.

I texted my mom saying “knowing what I know now and how big you were it was pretty stupid to get out on the lake.” She said my bro was late and they “walked her hard” to get my sister out before her due date of Jan 1…for tax purposes. “Nobody thought you were coming.” Water only broke on its own with me.

Sorry to derail the thread Jeremy. Should be done now!

6’ but skinny as a rail most of my life. Couldn’t put weight on if I tried for the longest time. Not such an issue anymore.

Spill ‘em! I can’t wait to hear them in on way or another.

Here’s one. Us managers used to scrimmage with high school teams. One night, we took Al, who had just gotten here, to some high school in Washington County. Al was a total gym rat. Anyway, nobody knew who he was yet, so we told the team we were playing that he was a manager (he was not a big guy). Al proceeded to hit half court shots and dunk all over those boys. It was a bloodbath, lol. I will never forget their faces, and if I remember correctly, the team we (mainly Al) destroyed that night, went on to win state the next year.

My first visit to BWA was Hogs vs. LSU. Al went wild that night hitting 3’s from way out. It was a special night with niece who was like another daughter. We spoke about it often over the years. Donna passed 3 years ago and I cherish that memory.

I always thought Al was born too early, Danny. He was Steph Curry before Steph Curry. He would definitely play in today’s NBA. What’s crazy is he could shoot like that with either hand.

I always thought Al was born too early, Danny. He was Steph Curry before Steph Curry. He would definitely play in today’s NBA. What’s crazy is he could shoot like that with either hand.

Jeremy, where is Al today? 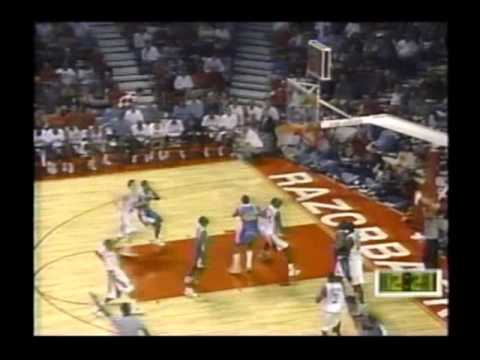 I know he’s living in Alabama, but I don’t know what he’s doing lately.

What’s crazy about that highlight clip is that Al told me at shootaround that morning that he was gonna break the record that night.