Clint McDaniel and a guy named Brian Biggs, a businessman from Jonesboro, are putting together a documentary to celebrate the 30th anniversary of our National Championship in 2024. They are going to interview all of us who were involved, so obviously I’m very excited. HY has given the producers full access to The Bud and are planning to screen the film there when it is complete. Hopefully they will find a distributor for it. I would think ESPN, at least, would be interested in the film. I am told it’s going to have a “30 for 30” look to it.

I’m sure people are rolling their eyes at getting the managers’ stories, but I have some pretty cool behind-the-scenes stuff…that I can share on camera, lol.

Actually I think a manager can have as good inputs on behind the scene stories as players/coaches. Sounds like fun.

That will be some pretty cool stuff right there !!

Can’t wait to enjoy it 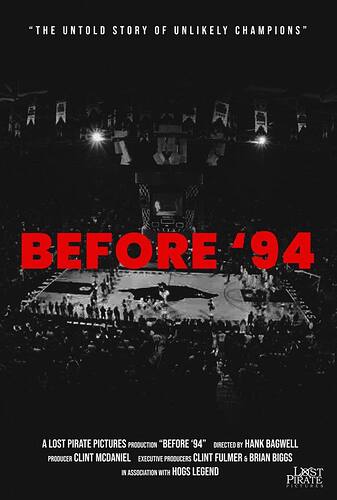 I think Jeremy and Razorblack could offer up some interesting behind the scene takes. Look forward to this. Except the fact that we are coming up on 30 years, makes me feel really old.

Me too. Just booked a guy’s trip to Vegas next month for my 50th.

Well at least you are still young enough to be excited about a trip to the city that never sleeps. I’m perfectly content to remain in a town that never wakes!

Hit the big 5-0 in early July myself. Happy Birthday a little early!

Lol. What town would that be?

Jeremy, I’m not rolling my eyes at all. You have a unique perspective that will def add to the documentary.

July 5th here myself. I’ll be 46 this year. The story goes, I was due on July 15th. My Mom was HUGE though and I was her third. That didn’t stop them from getting out on Lake Hamilton in Hot Springs with friends.

Her water broke on the boat. They rushed back to the dock. Bro and sis were angry they had to miss fireworks. Dad was angry because he sped back to Little Rock and DIDN’T get pulled over doing triple digits (finally had an excuse)…after all that I was still 4 hours and 57 minutes late from being a bicentennial baby. For good reason, but that’s an extended story.

Thank you, brother. I do have some pretty good stories, especially involving Al Dillard. My grandma wanted to adopt him, lol.

You’ll always be a bicentennial baby to me.