Nice chart OTH Arkansas put on Twitter. He left off Cade A. Most commenters guess that JD, Connor and KK will leave too 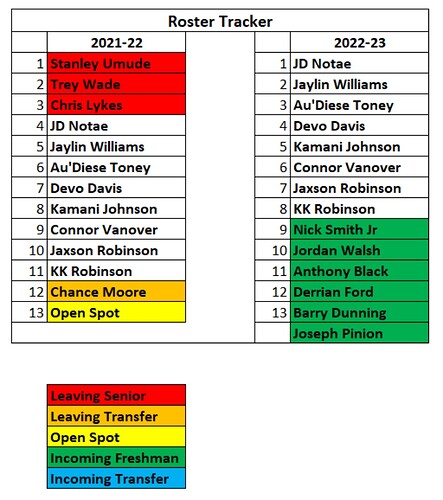 I saw one such article yesterday that said “Vanover is expected to stay”. So…

If JD leaves as expected, that will still require one departure for each player Muss adds from the portal, and most people think we’ll add at least two. CV and the Robinsons would certainly be possibilities, although if Jaxson can learn how to play D his shooting might keep him around.

Don’t see Notae going from 20 shots a game to half that.

Don’t see Notae going from 20 shots a game to half that.

Valid point, but I could also see the NBA people telling him “this is what you need to work on, and you need to be working on it in college.”