As I mentioned the other day, I would be surprised if Blake Wiggins made the Diamond Hogs’ spring roster after suffering a wrist injury that required surgery.

Austin Catron, who played some last season as a designated hitter, is no longer on the team.

There are now 49 players on the team, meaning there will be 14 more cuts. Here is how that kind of breaks down:

Based on what I’ve seen in terms of roles, production and playing time, here are some players I think will probably be on the 35-man roster next season:

That’s 29 players. There are probably a few who are safely on the roster that I don’t know enough about. I didn’t list Zach Plunkett because I’m not sure if he is on scholarship money or walking on. He’s the catcher transfer from TCU who has to redshirt.

And of course in that group I listed, some may opt to transfer to a place where they can see more playing time, which would be one less cut the coaches have to make.

I hate to hear that about Wiggins. From Hog to community college then back to the Hogs then cut. Wonder if he will try to stick around or go somewhere else?

If you hear where the guys ended up, please post it here.

Baseball is brutal in that way. My friend mentioned to me that her mom had gone to Fayetteville to see Sammy Blair play. I didn’t have the heart to tell her that her nephew seems unlikely to make the team, at least from what I’ve seen. It’s a shame, because I heard that he really loves Arkansas.

Baseball is brutal in that way. My friend mentioned to me that her mom had gone to Fayetteville to see Sammy Blair play. I didn’t have the heart to tell her that her nephew seems unlikely to make the team, at least from what I’ve seen. It’s a shame, because I heard that he really loves Arkansas.

Unfortunately, that’s how it is for many of the ones who don’t make the team. A lot of times they are players who committed as high school sophomores or juniors, are from the state or grew up wanting to play for the Razorbacks, or a combination of the three.

I’ve known many people who thought they were going to play college baseball and found it quick it wasn’t for them. My best friend was supposed to play at Texas Tech, but quit after a week because he realized he didn’t like it there. Phil Elson told me he was going to play baseball at Indiana, but it didn’t work out. I knew people in college at Arkansas who planned to play for the Razorbacks and didn’t, but stayed because they loved the college.

Is he on campus and likely to make the roster?

And same question for Kacey Murphy

Is he on campus and likely to make the roster?

And same question for Kacey Murphy

Both are with the team. I saw Heiss pitch a couple of times this fall and his stuff was just OK. He gave up the grand slam to Bonfield yesterday.

Murphy didn’t pitch during the fall series. They were holding him to start Game 5 if he was needed. He is going to throw in today’s scrimmage.

I’m not sure what either of their status is to make the 35. I know that the newcomers are pretty good on the mound and they are going to challenge some of the sophomores for innings.

Matt. What happened to Jordan Rodriguez?

Matt, do you have any idea when the roster will be completed? I don’t seem to remember any announcements in the past, just one day the roster appeared on the official web site.

Matt. What happened to Jordan Rodriguez?

He’s still with the team. He didn’t pitch in the fall series, but I think it had something to do with classwork. I think he was scheduled to throw Friday. I’d be surprised if he isn’t on the 35.

Matt, do you have any idea when the roster will be completed? I don’t seem to remember any announcements in the past, just one day the roster appeared on the official web site.

There is never an announcement. I think it will probably be decided by the end of the month. The downtime for baseball coaches is in November. They know who they want to keep already.

Can someone post stats from the Hogs recent intersquad games? 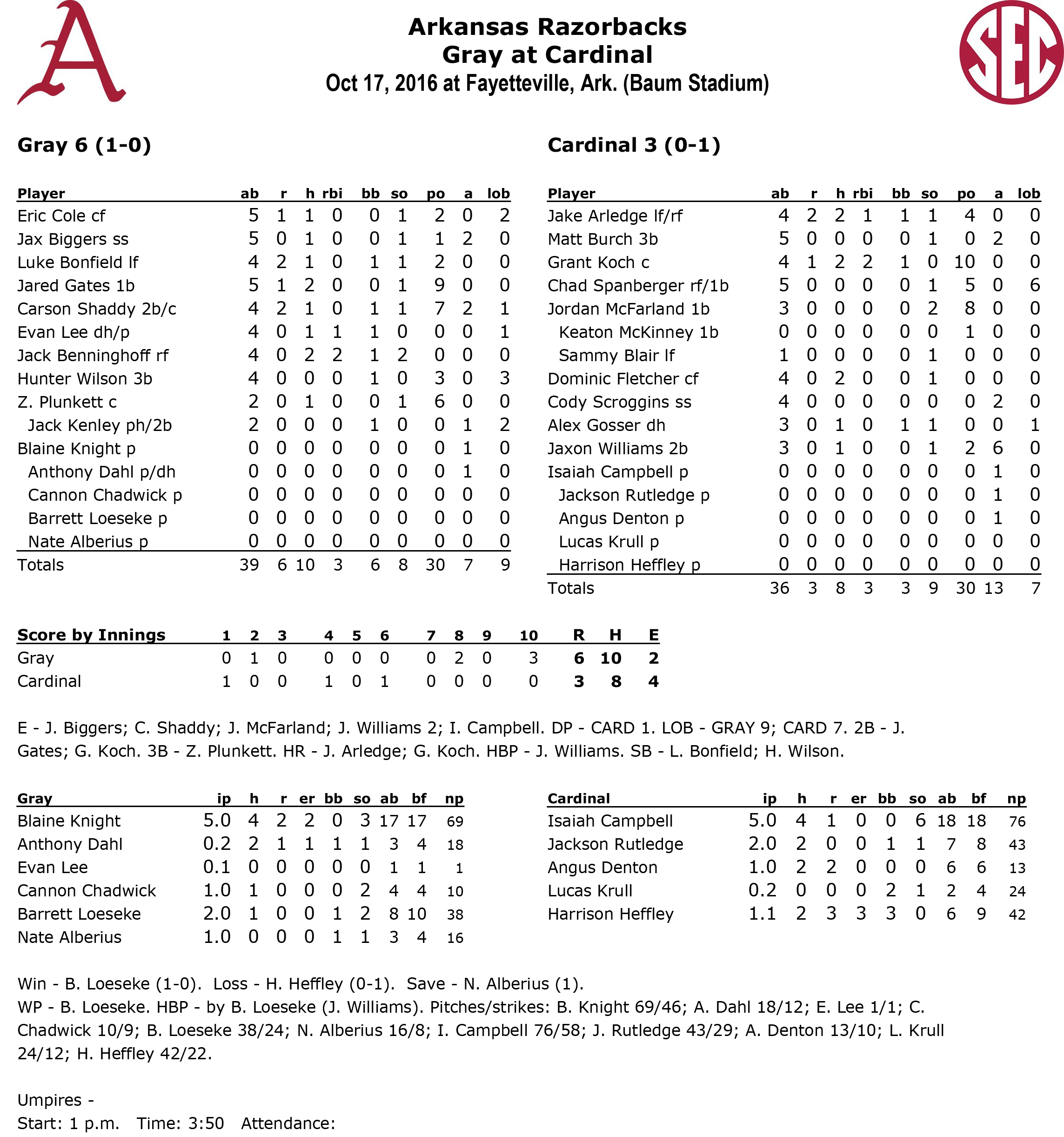 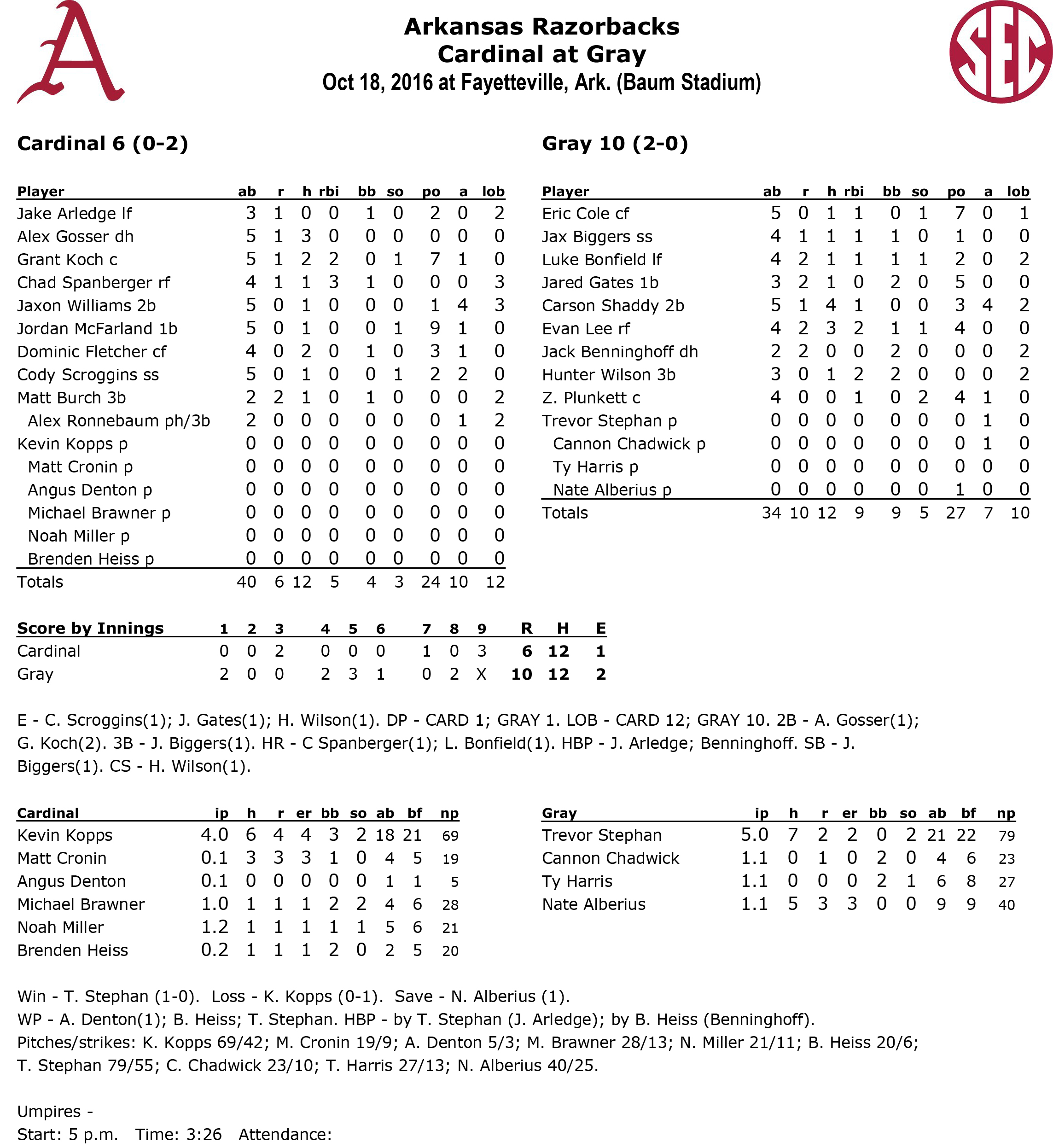 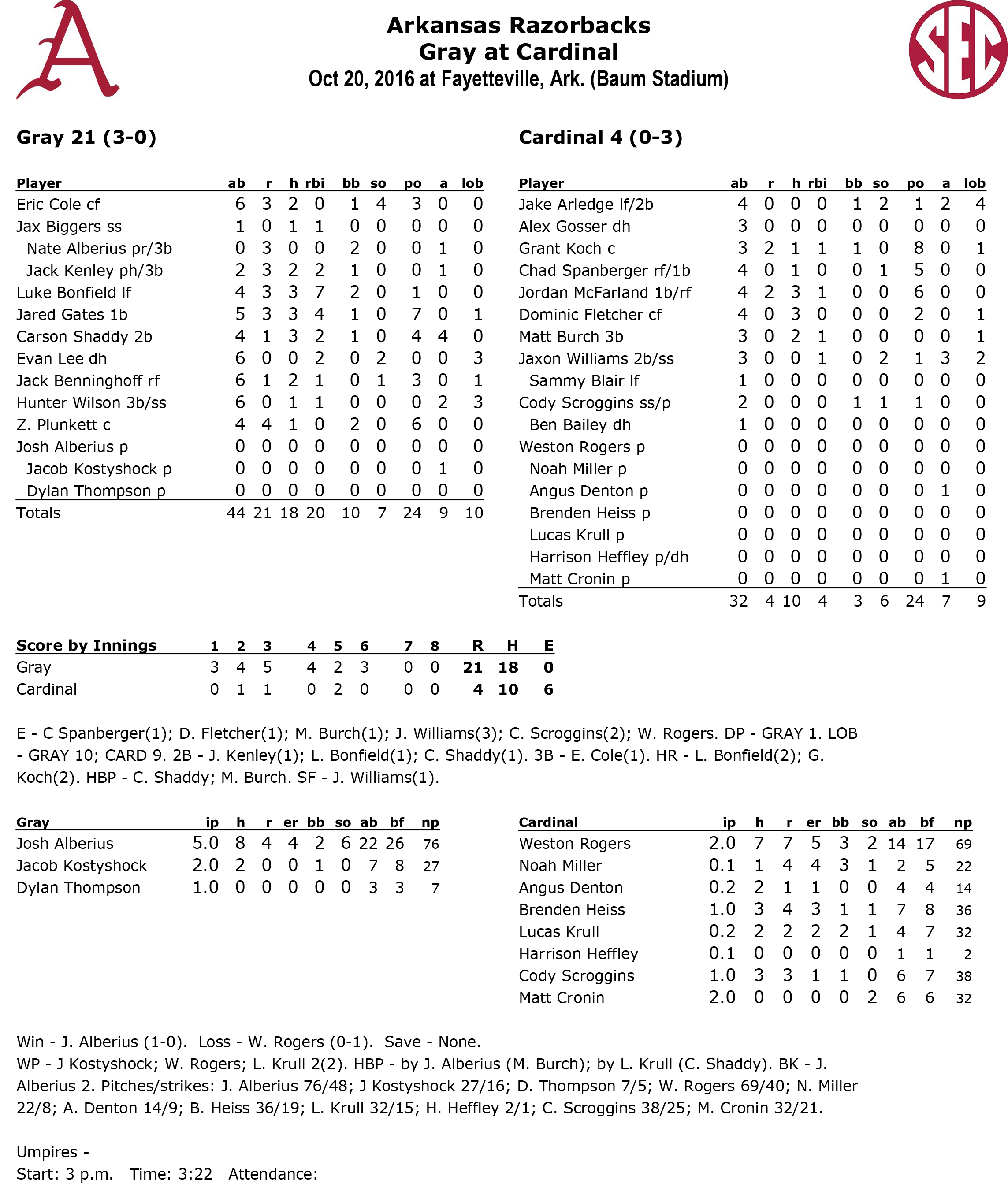 I saw Rodriguez pitch twice this fall, both about three weeks ago. Looked decent both times. He’s a guy who can get a lefty out. Not sure you want him to pitch to a righthander in late-inning situations.

Matt’s got a good list working there. I’d agree with all of those. I’d say most of six more that will make out the 35 will be pitchers. I think they’ll carry 15-16 pitchers.

Clay, looks like a high number of base on balls issued by some of the newbies. Hoping Wes Johnson can have an impact there, your thoughts?

That’s generally the way it works for the youngsters. Sometimes they can be a little intimidated by college hitting. Also, when you first get to college and are working with a new pitching coach, sometimes you are given some new tools, like a new way to hold a pitch. It takes a bit to get command of those different things. But it works out. I do know that Wes Johnson likes the curve ball. He calls games a bit different than Dave Jorn. He’ll ask pitchers to work backwards, throwing curves on fast ball counts. Throwing curves on 3-1 will get you some walks until you learn to locate it a little better. I have watched Cleveland’s pitching in the World Series. They throw lots of curve balls. That’s handcuffed the Cubs to some extent. Watch for that the last two games starting tonight.