There has been a lot of talk this year about whether attendance is down at Baum. I got tickets scanned figures this week. Compared to 2019, which was the last year full capacity was allowed for a full season, scanned-ticket attendance is up by more than 300 per game. Here is more: 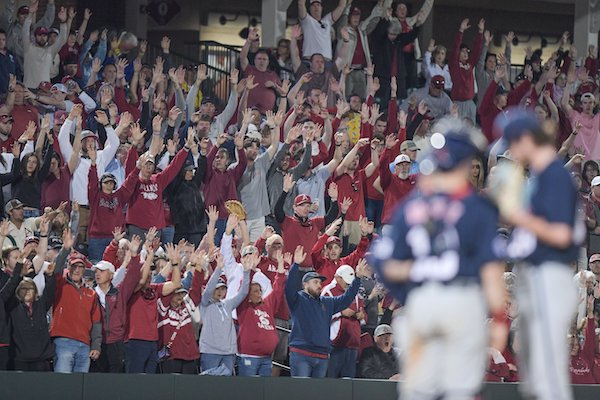 The average number of tickets scanned at University of Arkansas baseball games this season is higher than the 2019 regular season, the last time the Razorbacks allowed full capacity for an entire season.

Thanks for the facts.

Perception is everything. It reminds of those those that think all our hitters are told to take until they get a strike. They say it so much, they start believing it.

Hey South why don’t you just say my name when you mention taking pitches bc everybody knows you talking about me!I never said "all"our hitters are told to take a strike.I said as a team we take so many hittable pitches I wondered if we were being told to to get the pitch count up bc I have heard DVH mention Pitch count numerous times but this past weekend at Auburn we were more aggressive and hit the ball much better and when Coach Thompson was asked about it He said we swung at a lot more balls early in the zone and didn’t swing at a lot more balls out of the zone…amazing how that works…ball down the middle has a chance to get hit hard “if” you swing at it…so if you going to quote me …get it right.

Don’t be so defensive. I’ve heard that talk from a lot of people, not just you (similar to the unknowing that keep saying attendance is way down). My apologies.

Because of the new loge seats in right field, the party deck and folks who lost chair backs and have migrated to the Hog Pen, it may be true that actual attendance is up AND there are fewer people sitting in the chair backs.

I think that’s probably the case. I don’t think there is a way to back up with numbers, though.

Yeah, hard to figure that out, plus you have to account on the limited student tickets this year, when in past years, all they needed was their student I.D.

My biggest gripe about attendance and the ticket situation:

But I have sat in seats in Row E of 114 for every game this year except one. Those seats, which I would love to have, have apparently not been used at all by whoever bought them.

I wonder how much money they “conned” donors out of with their “give more and improve your position” spiel? I know I went up and my extra two tickets I wanted were Hog Pen season tickets.

Most gave more to keep what we had.

When is that coming in Hoops?

Selfishly, I hope soon, but I’ve been told nothing will be done until we do our re-do of BWA. They will re-do parking for basketball this year, and football in 2023.